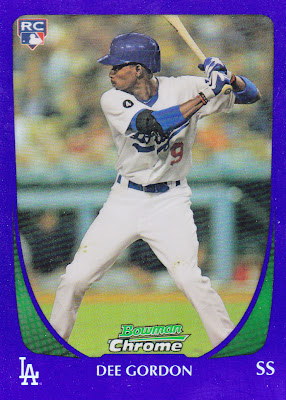 I go to the post office about once a week. It's a small office in an almost vacant business building that houses everything from a bridal store to an outpatient chemical dependency clinic.

I've mentioned before that, except for Christmas time, hardly anyone knows the post office is there. So, at most, there is a line of three, and I'm in and out.

It's a familiar routine. I know the two guys that work there. One, Charles,  is an older, pleasant type of few words. He walks with a bit of limp and usually prefers sweat shirts and sweat pants. The other, Dave, is flashier. He wears open Hawaiian shirts and lifts weights. Sometimes the portable radio blares behind him with a strange mix of AC/DC, Lady Gaga and Britney Spears (it's a bit uncomfortable waiting in a longer line when Britney is moaning "Gimme More," let me tell ya).

But both are efficient and friendly. I put my envelopes on the counter, and they plop it on the scale, and the amount pops up on the electronic screen to the right of me.

That was the routine earlier this week when, after a long bout of sickness, I returned to the post office. I placed my stack of envelopes, all of the small variety, on the counter. Charles put the first one on the scale. And the screen flashed the price ...

"Everything's gone up. Everything," Charles says. He proceeds to tell me the CDs that he sends out cost more, too. But I'm too busy calculating what that's going to do to my budget.

Eventually, I shrug it off. Twenty-four cents more per package isn't going to kill me. No big deal. In fact, I bundle up a few more packages and am back at the post office for a rare second time in a week. This time Dave is there. No music though.

He puts my first package on the scale. It's going to Canada. I brace for the $1.95 to flash on the screen, although I should know better.

"Overseas packages have almost doubled," Dave says cheerily but in an understanding tone.

I wanted to crack that there is no sea between here and Canada, but I'm sure he's heard this one before. Even though I was ready to make a joke, I was pretty shaken by the news. It hasn't been an easy month monetarily.

I checked the weather a few more times. Same reports. I took the money set aside for the card show and put it in the bank. We needed groceries.

This was on Friday, and I was beginning to wonder whether I could send packages out with the same frequency that I've done in the past. I'm not one to focus on the money aspect of things in almost anything. I budget stuff, but I'm not super vigilant about it. It's too much worry. But this? This kind of got me.

Then today, I received a big package from Rod at Padrographs.

I looked at the postage on the front.

"Not bothering Rod," I thought.

Inside were some cards, and an unopened junk wax pack, and some cool Dodger figurines that I have to identify later.

And there was this: 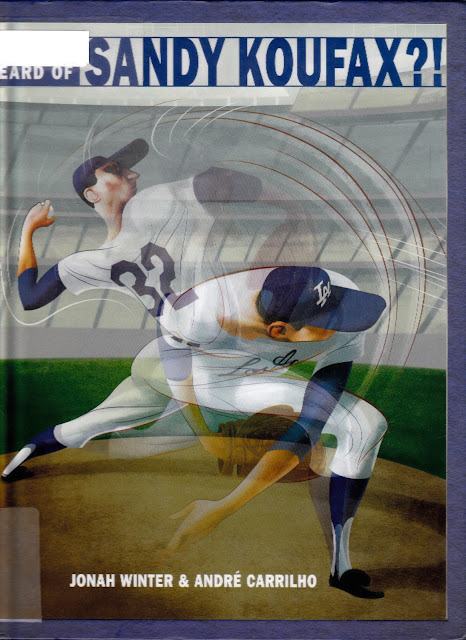 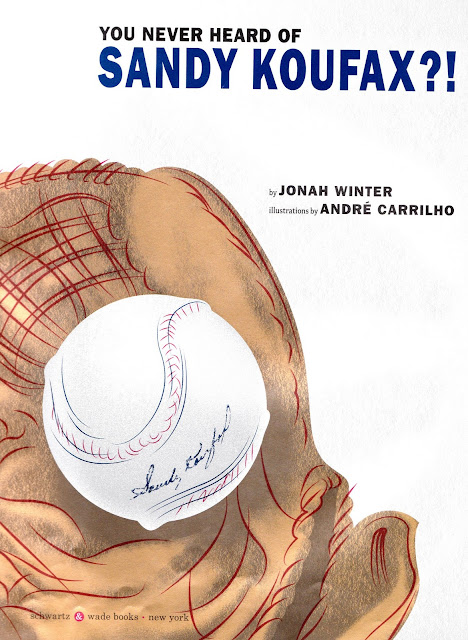 It's a children's book called "You Never Heard of Sandy Koufax?!" It features a holographic front and some absolutely terrific illustrations by Andre Carrilho. 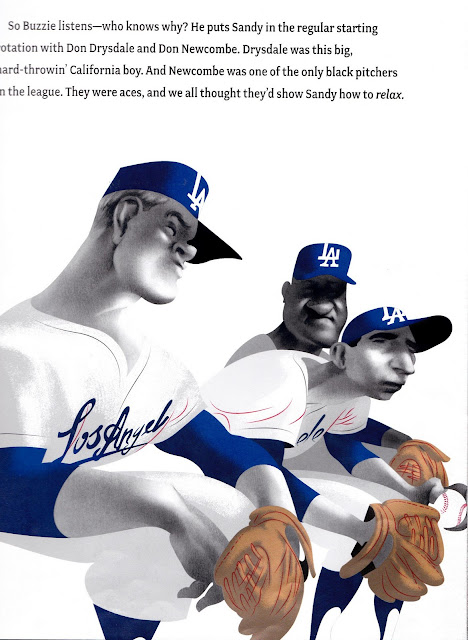 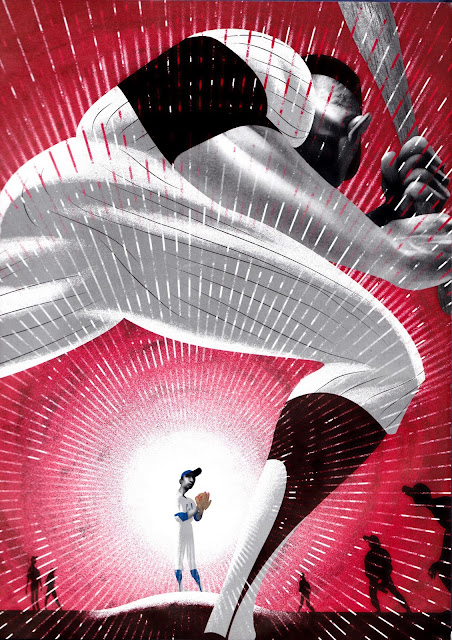 On each inside cover is Carrilho's rendering of a famous Topps Koufax card: 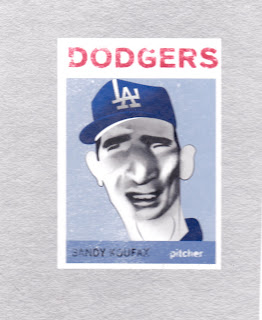 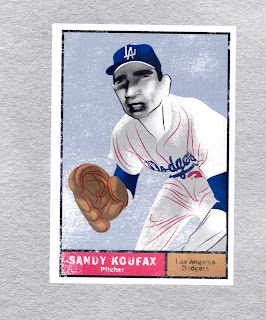 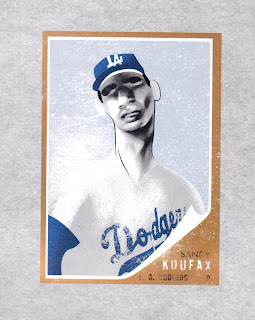 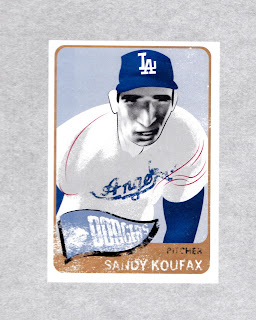 Over lunch, I leafed through the book -- which is the story of Koufax's career -- mesmerized. What a terrific item, combining my favorite things, the Dodgers, Koufax, baseball, books, writing and illustrations. How thoughtful of Rod.

Then I thought back a couple weeks ago to another large package that I received. It arrived in the middle of my sickness and I could barely look through it. I knew it was wonderful, but I just couldn't focus on anything.

The box came from Smed. He's sent me generous packages before. I don't remember how much it cost to ship this box, but I know some of his other boxes have hit double figures.

The box contained a few Dodger cards, like the Bowman purple refractor of Dee Gordon at the top. But the major part of the package was a whole mess of 1977 Topps: 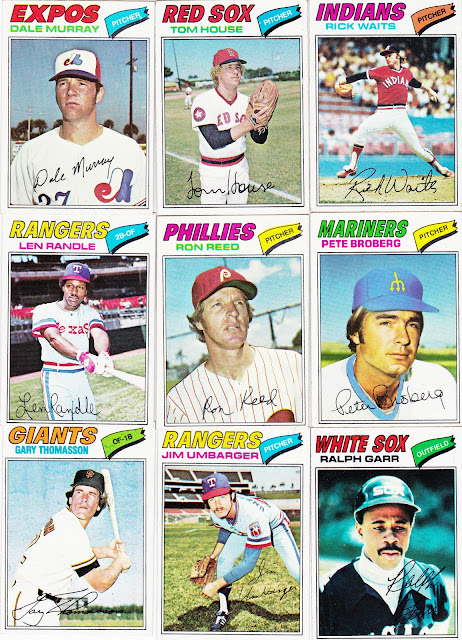 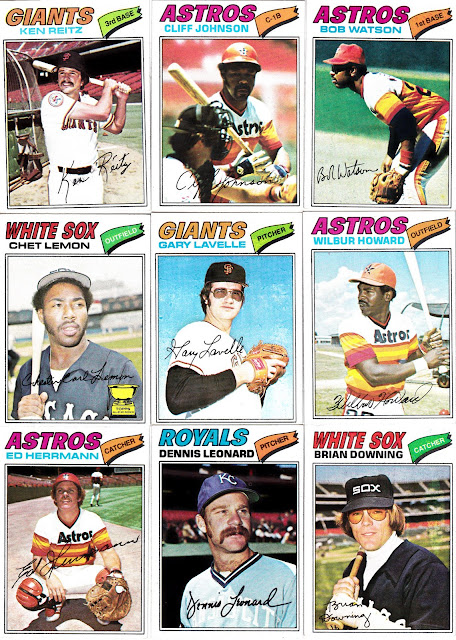 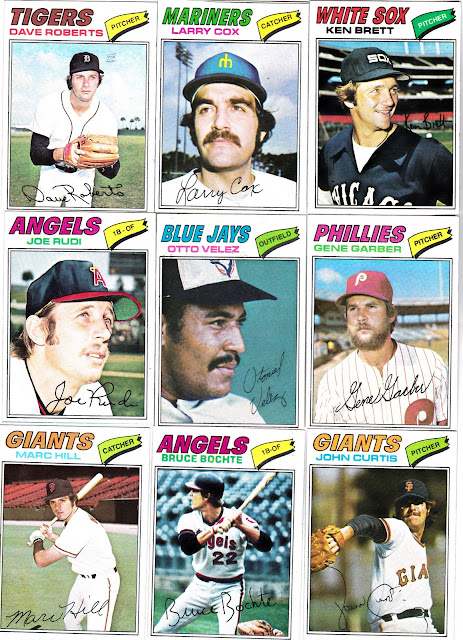 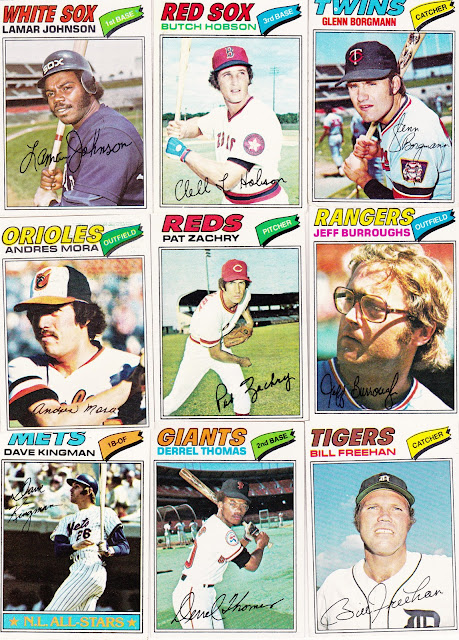 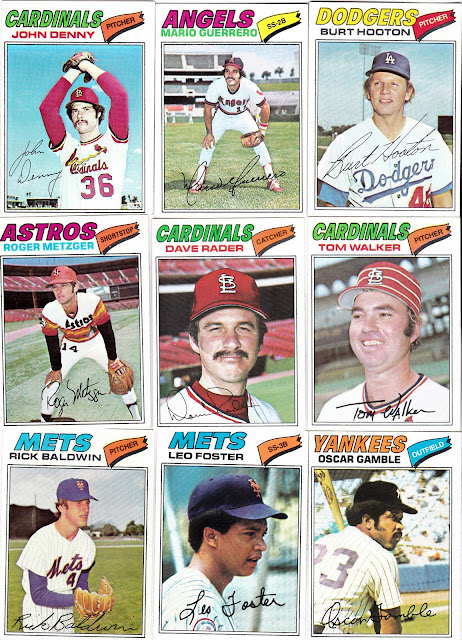 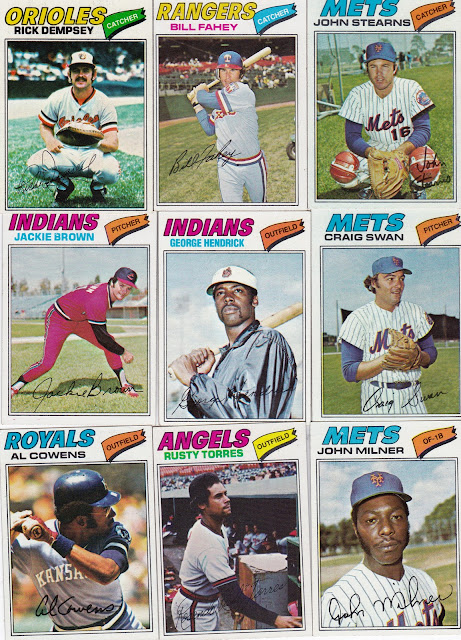 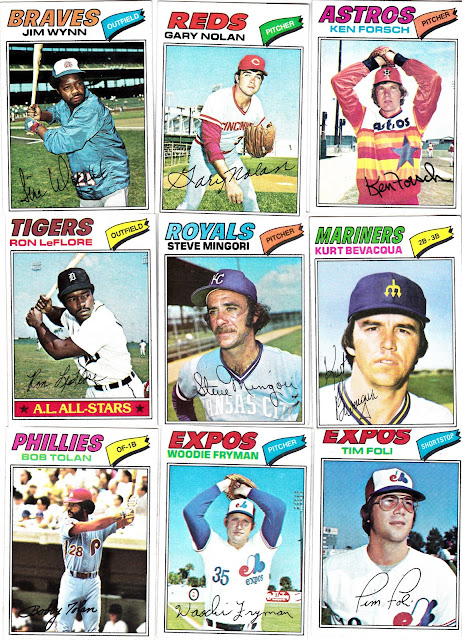 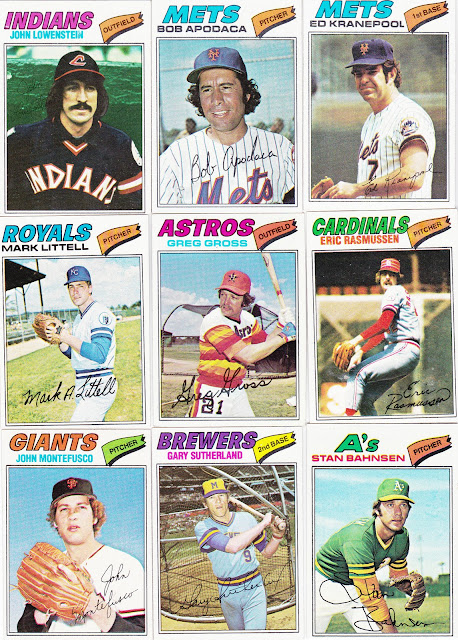 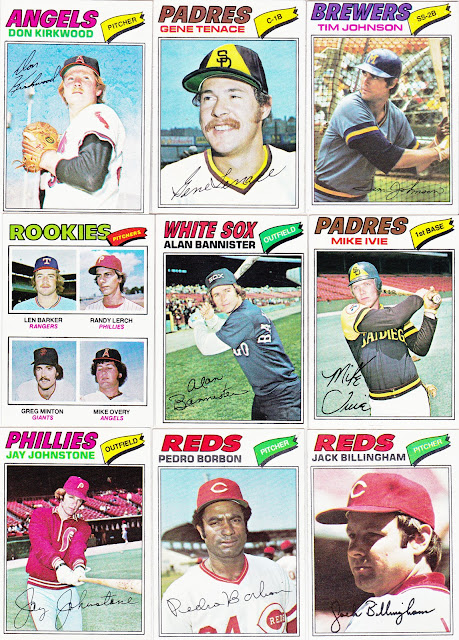 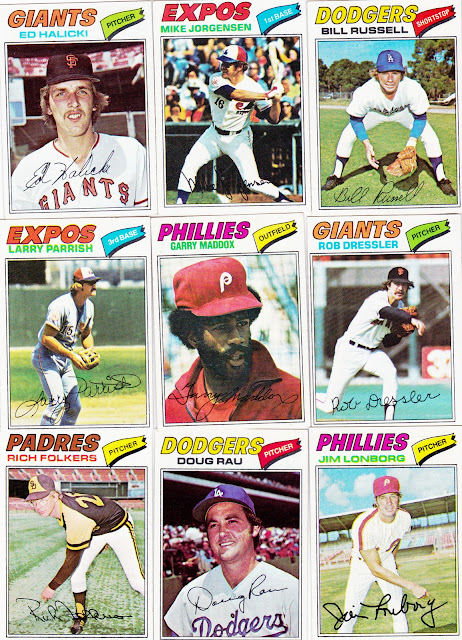 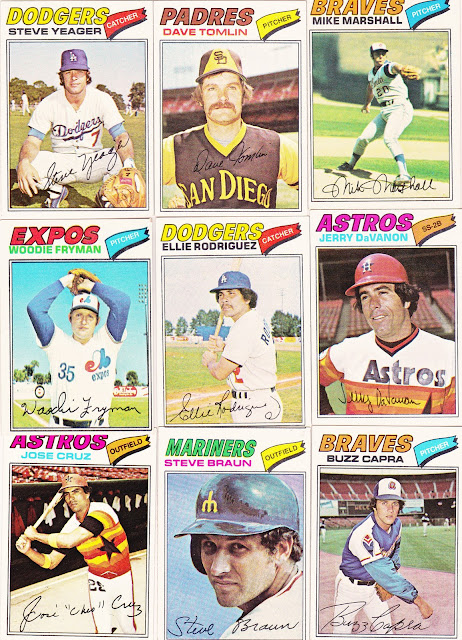 I really need to get a list of wants for '77 Topps after I catalog these cards.

This is the last of the sets from the major Childhood Nostalgia Era that I need to complete. 1974, 75, 76 and 78 are already done. Once I finish with '77, I'll decide whether I want to tackle '79, which is kind of on the edge of the whole kiddie era.

But how much did it cost to send that package of nostalgia to me? Six bucks? Seven bucks? Ten?

Whatever it was, it was incidental (at least I hope it was for Smed). The enjoyment I received from these packages can not be measured in cash.

So, I'll continue to send out packages as often as I can. When the money runs out, it runs out.

This hobby is too important.

Captain Canuck said…
yeah, I hear ya pal... 98% of my packages have to go..uh.... overseas.
So I send when I can. When I can't, I can't. One of the reasons why itry not to get involved in specific card for card trades.
Sending stacks of cards to friends is much better. And they understand if it arrives a month later than planned.
January 28, 2012 at 6:08 PM

AdamE said…
Crap I went to one of those after hours postage machines the other day. I didn't bother weighing the packages I just plugged 1.71 into the machine and bought 4 of them used three of them and put the other in my wallet for next time. So now either they are coming back or everyone I shipped to has to pay some more money.
January 28, 2012 at 7:49 PM

Justin Drummond said…
If you buy your postage and print the labels though Paypal the price for the small envelopes actually went down! Instead of $1.95 you could be paying $1.64 (with delivery confirmation included). Something to consider.
January 29, 2012 at 3:20 AM

Two Packs A Day said…
definitely! If you do a lot of the work (Paypal or online at the USPS), you can usually save money since I assume the USPS makes some rates a little bit cheaper because it's the customer doing the work instead of a postal clerk.
January 29, 2012 at 7:56 AM