I wasn't the only one who suffered during my illness 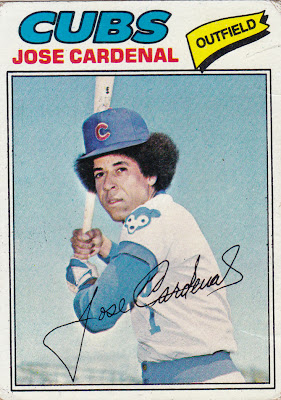 Today, I'm planning to head into work for a full day for the first time since Wednesday. We'll see how that goes. I'm still coughing like a nine-pack-a-day puffer and unless my co-workers consider that comforting background music, things could be bumpy.

Also, I haven't exactly been in touch with the normal rhythms and customs of life for the last week and have done a variety of things to almost get myself and others killed, including: driving at night through a snowstorm for a mile without headlights, leaving the stove burners on while making chicken soup, sailing through a stop sign, and other things I'm sure my wife will tell me about when she's sure I'm my old self again and can be sufficiently embarrassed.

Staying home and lying on the couch when you're sick isn't only to get you healthy and keep others from catching your illness. You're also there because sick people lose the direction manual to life's little rituals.

Fortunately, no one got hurt during my episode. Except some cards. From one of my trade packages.

I have no idea how it happened. The last six days have been a haze. During some of my vaguely clearer moments, I'd shuffle over to my baseball card desk and update one of my Dodger binders. The Dodger binder du jour rests in the middle of the desk. To the right of it are trades in process. What a sorry corner that is right now. Lots of work to do there and I have no idea when I'll feel up to re-firing that puppy.

To the left of the binder are trade packages that have arrived that haven't yet been blogged. I keep them order from the oldest to newest.

The oldest trade package was from Spiegel. I was just about to scan his cards when the illness hit. So the cards sat there and moved up the line as more cards arrived that I was too delirious to care about. Somewhere along the way in my careless, feverish state, I must've squashed some of Spiegel's cards. Because a few now have the dreaded bottom left-corner ... 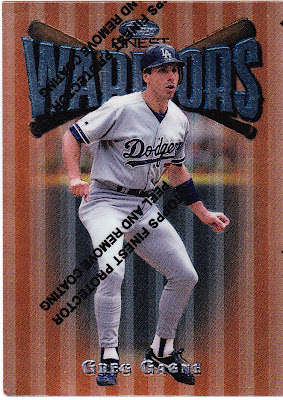 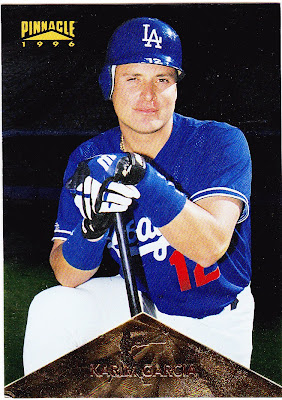 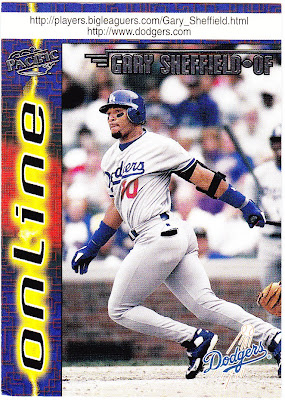 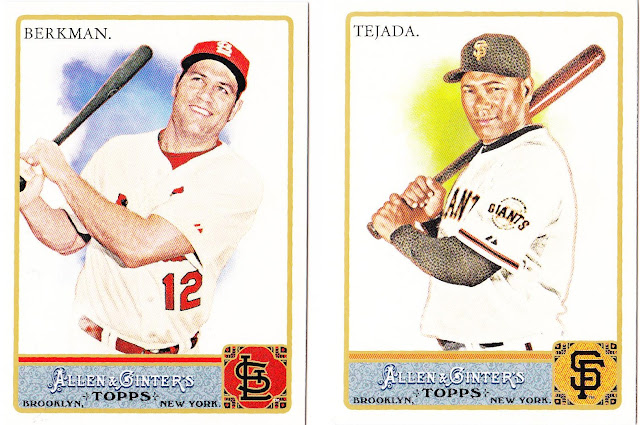 (You probably can't see it on the A&G scan)

Of course this sent myself into yet another session of self-loathing -- a common ritual when you're sick -- but it's no big deal. The cards are all still going in the collection. I may replace the Berkman A&G card, but I've ended up with two of Tejada anyway.

Besides, Spiegel sent plenty of other cards that are just fine in their own way. 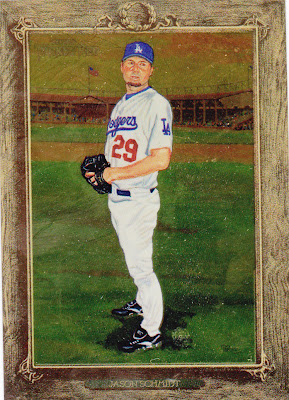 OK, I spoke too soon. It's Jason Schmidt. But at least he's shiny! 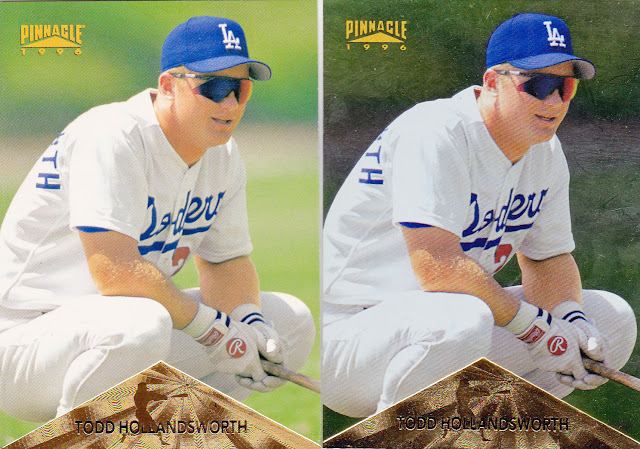 Two versions of Todd Hollandsworth. One is a parallel, maybe a Museum Collection card? I don't know. I'm still in recovery mode. I haven't gotten to the point of caring about stuff like that again. 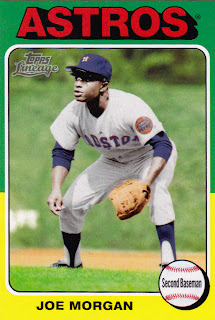 A '75 Lineage mini of mini Morgan! 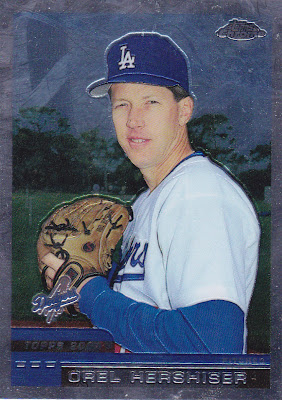 Chrome Orel Hershiser was too powerful to get dinged. 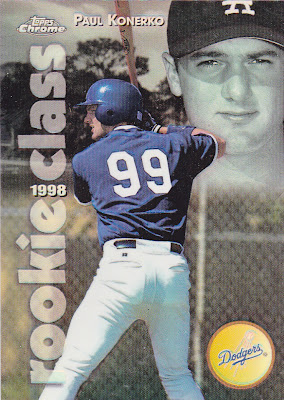 Konerko sure had some fancy cards for being nothing but a prospect at this point. This is my 63rd Dodger Konerko card, or eight cards more than the number of games he spent in a Dodger uniform. 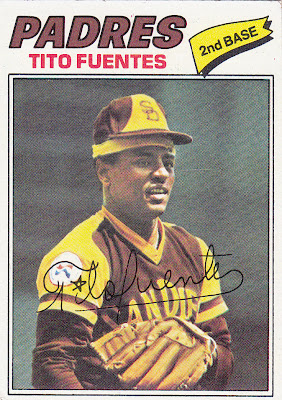 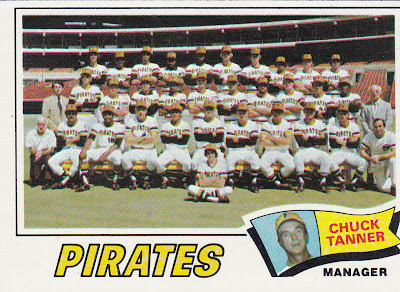 Spiegel always sends some '77 Topps my way, which is great. There were lots of terrific cards that always take me back to 6th grade. Gorman Thomas, Cesar Cedeno, the Cubs floating heads team card. But these are my two favorites just because they replace two of the worst-conditioned cards in the set for me.

The Pirates team card that I had before was one of those that came from the team-card sheets you could order through the mail. Those do not hold up well over the years. 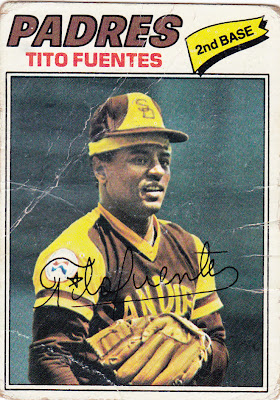 Lastly, I was the beneficiary of Spiegel's quest for Dodger autographs. I've stopped doing the TTM thing, but that doesn't mean I don't appreciate autographed cards from former Dodgers. 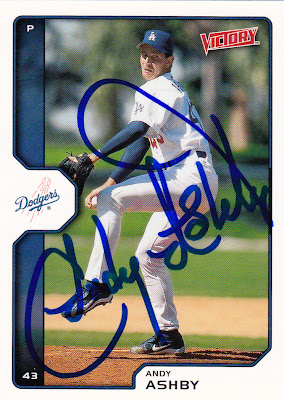 I don't think I have ever seen so much thought go into a signature. And so loopy! I'd say it looks like a 14-year-old girl signed Andy Ashby's signature, but that'd be a little mean. 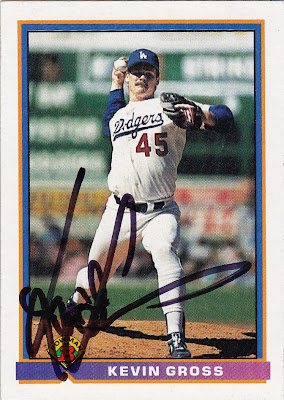 And then you've got this thing that exploded in the lower left corner. I'm never going to be able to convince anyone that Kevin Gross signed this.

Quite an interesting assortment of cards from Spiegel that I'm now just getting the strength to appreciate.

OK, now I have to go through a mental list of what I need to bring to work tonight:

AdamE said…
That Pinnacle Hollandsworth card is the Foil Parallel not the Museum collection. The Museum cards look way more awesome. They could have called them radiating multicolored foil parallel card. In fact they are probably my favorite parallel of all time.
January 17, 2012 at 1:44 PM

Spiegel83 said…
Get well, Godfather. Also, going through stop signs is cool. In LA, it's called the "California Roll" Stop signs are treated more like a yield sign.
January 17, 2012 at 2:35 PM

Mark Aubrey said…
Hope that you get better soon. But, in your delusional state, could you set aside that 2000 Topps Chrome Hershiser in the stack of cards you're going to send me? Thanks.

TheHitKing said…
I like you Joe Morgan card. Here in Cincy we don't think or talk about Leonard in any other uniform. I was talking to Joe on Monday morning about this, funny how common topics come up; I totally forgot that he played for Houston, shame on me in the face of a HOFer. I told him at least he wasn't an AL bum...I blushed as I recalled his stint in Oakland. It behooves one to stay on top of his facts...ughhh
January 17, 2012 at 8:23 PM