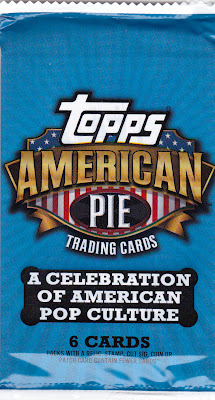 Until today, I hadn't been in a store since December 23rd. I hadn't purchased a pack of cards since December 15th. This is a result of both saving cash for Christmas gifts and continuing my lifelong mission of avoiding crowds whenever possible.

The worst kind of crowds -- at least in the places where I have lived -- emerge the week after Christmas. Just horrific. So, I always wait until January 1 when I think everyone is too hungover to shop. Yet, still, I saw two people today who appeared to be brother and sister, or boyfriend and girlfriend, or very close friends, each talking on their phone to different people. This happens all the time and annoys me to no end, although I suppose it would be worse if they were talking on their phones to each other. And it's why, for health reasons -- mine not yours -- I need to stay away from crowds.

While out today, I mostly bought necessities for the coming winter storm (the first of the season around here). But just because nobody wished me a Happy New Year on the previous post, I thought I'd punish everyone with a pack of American Pie.

This is my first opportunity to see these cards. But I witnessed enough of it on the blogs to know it's not anything I need to buy again. My hope with this pack is to pull one of the Muppets cards, or the Rudolph the Red-Nosed Reindeer card, or the girl with the big '80s hair card. But there's little chance of that.

So, let's see what kind of stupid/boring/depressing cards I pull, OK? 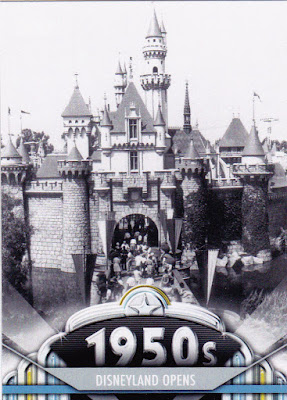 Possibly the most colorful place in the world. Yet it's black-and-white here. 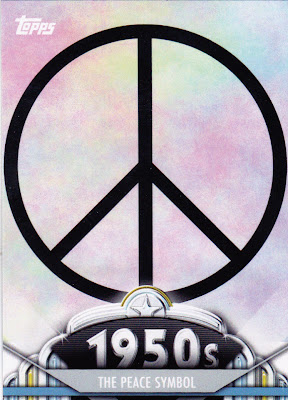 With a lot of these cards, I've wondered how long it took from concept to final result. I'm thinking about 90 seconds with this item. 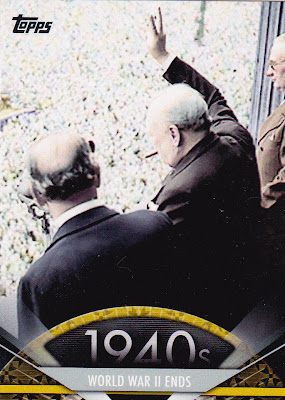 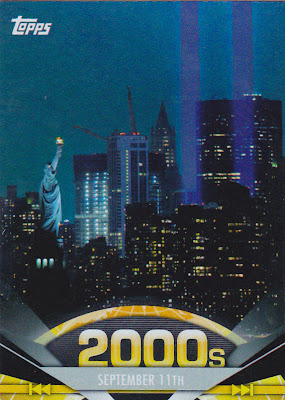 Wow. Heavy card for a pop culture set. I don't mean to rag on this card -- it's poignant in its own way. But a problem I have with this set is there are too many cards in here that I don't consider "pop culture." I know pop culture has many definitions and one of them is mainstream ideas of the time. But pop culture to me is defined as popular diversions from the everyday struggles/difficulties/horrors of life. Don't give me a pop culture set and then a card remembering terrorist attacks -- save that for a set about American Heroes or Defending Liberty. 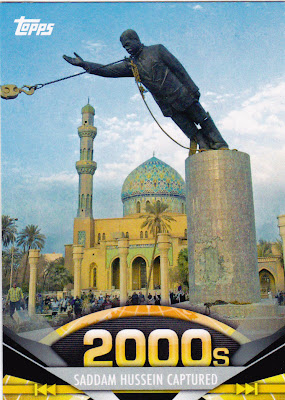 See above. I don't want politics in a pop culture set. 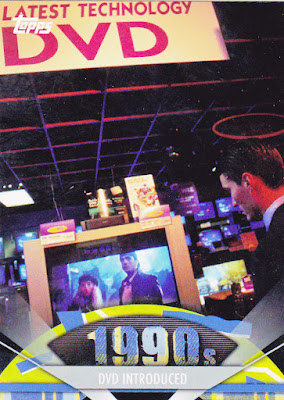 Card pulled by a guy who still has VHS tapes in his home. And why does that dude have a halo?

And that's $2.99 I'll never get back. No muppets. No hairsprayed girls.

It's all uphill from here.

Paul Hadsall said…
Bleah. A set like this does a lot to convince me that the time for collectible trading cards has passed.

I hope that the rest of your card purchases this year are more fun. :-)

--David said…
I think if more people knew this would be the punishment for not responding to your year-end wrap-up sooner, I think you'd have a million responses. Well, maybe not a million. More than five, though. Surely. On the upside, your pack-busting can only go up from here!
January 1, 2012 at 3:06 PM

Nick said…
I guess I'm one of the few fans of this set, but I agree that the more recent "pop culture" tidbits Topps used from the 90s-00s were terrible. I don't need to see a 9/11 card or a Saddam Hussein one.

Fuji said…
To a fellow blogger who shares the annoyance of watching two people hanging out together, while talking on their cell phones... I say, "Happy New Years!".
January 1, 2012 at 7:21 PM

flywheels said…
In the words of dayf, that pack sucked donkey balls! I've bought a handful of packs and have been pleased with each one so far...but that pack you chose is awful. BTW, I agree w/ you about the political cards being in the set. I too could do without them.
January 1, 2012 at 8:51 PM