January 16, 2012
I have only two rules when a card inquires about taking up residence in one of my Dodger binders:

1. Do you declare somewhere on the front of the card -- whether in print or in the photo presented -- that you are depicting a member of the greatest team ever, the Dodgers of Brooklyn/Los Angeles?

2. Are you unique when compared with any Dodger card already in the binder?

The only Dodger dupes that make it into the binders are those rare breeds, the highly coveted rookie cards, the iconic cards, the vintage from the '50s. But I can count those instances on two hands and probably one foot. Doubles just ain't gettin' in.

But there is one card that has found a loophole. I have two of this card in one of my binders. Yet the second version of the card is not intentionally unique from the first. By the rules above, it should be tossed in the dupes box. But I just can't get myself to do it.

Here is the first version of the card: 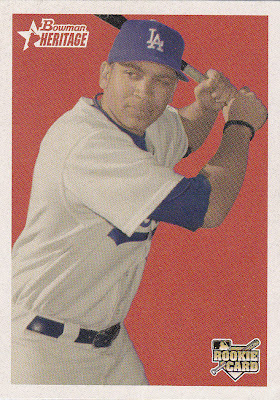 It's a 2006 Bowman Heritage card of James Loney. I've never cared for this set. But I do know enough about it that the red background is one of several colors repeated throughout the set.

OK, now here is the second version of the card, which is really exactly the same as the first version, as far as  I know. 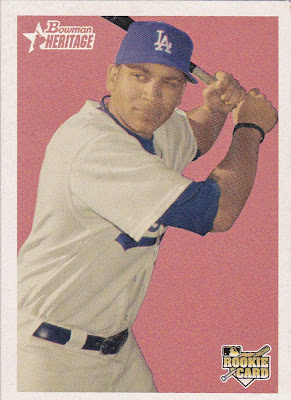 I'm guessing this is some kind of printing error. There is no pink/salmon background in the set, and I've never heard of color variations in 2006 Bowman Heritage (if there is, then forget I ever wrote this post).

When I came across these two cards, I looked for mention of such a variation in the set, but couldn't find any. The more I thought about it, the more it made sense that someone merely forgot to spray an extra coat of red behind Mr. Loney on the second card. Or maybe someone left the pink card out in the sun too long.

Essentially, the second card is just a dupe -- and should be denied admittance into the Dodger binders.

But I can't do that.

As a card collector who values color in baseball card design more than a lot of collectors do, I can't possible consider the two cards the same. Red and pink are not the same.

So "pinkie Loney" sits next to "red Loney" in my 2006 Dodger binder, and when I come across them, I tell myself pinkie is some super-secret variation that no one has discovered yet.

Hey, it's just as legitimate as all those colored foil-stamped variations we've received the last 15 years.

Jess said…
The "pink" version is actually the "white" version. Bowman Heritage really dropped the ball that year and most of the white variations are only slightly more pale than the regular versions. Your "pink" Loney is really a Bowman Heritage White parallel. They're both worth the same though...
January 16, 2012 at 8:53 PM

dayf said…
What Jess said. The White parallels should have been printed on different stock, but they dun goofed. Squinting at dupes for slight color differences (and some of them were barely different shades) drove me crazy that year.
January 17, 2012 at 12:23 AM