My one-card contribution to the one-card challenge

I'm happy to say that I've been notified of at least two transactions that are in the works because of The One-Card Challenge. Hopefully, there will be many more. Any day in which someone can finish off a set is a great day, really.

One of those people on the verge of finishing a set is Mark from Mark's Ephemera. Not only will he have the final card in what, no doubt, is a very cool collection, the '94 Ted Williams Company Negro League subset. But he'll probably end up with a couple of cards from me for devising this logo for The One-Card Challenge. Isn't it charmingly retro?

The logo -- it's based on the '63 Fleer checklist -- has booted my lame attempt on the sidebar. From this point on, click on that logo to get to the post where you can leave your pleas to finish off a set, or to see if you have a card for someone else that will finish off a set.

I'm still tempted to turn this into a page of its own -- much like Mark's Got It. Got It. Need It. If you have any thoughts on which direction I should go with this, let me know.

But as of now, all my focus has been to complete The One-Card Challenge myself.

It wasn't as easy as I thought it was going to be. I went through the whole list of everybody's solitary card needs. I thought I would be able to fill a couple, but in each case the card seems to be loose in the house somewhere. (More searching awaits). I have a card for a couple of other people, but others have beat me to it -- and that's fine by me.

A lot of the cards are from sets I've never seen, a couple I've never heard of ever. I wish those people luck. Who knows, someday I may turn into a Bowman Prospects fiend or start collecting football, and I'll have cards for everyone.

But now, I have just one: 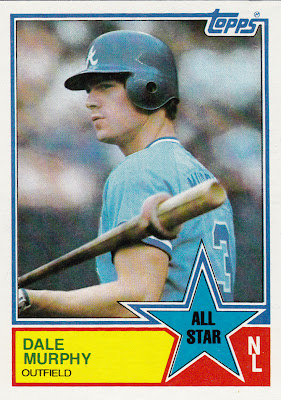 Of course, one suggestion for The One-Card Challenge is that mailing the card might work better if you put it with a few other cards that the recipient may like. You don't want to be bending that one, treasured card in a PWE.

I'm not stopping with Murph here, though. In the months to come, I hope to fill other people's requests, and I hope there are more requests to come. Again, if you receive your desired card from someone, either leave a comment on the One-Card Challenge post, or send me an email so I can cross the card off. (This is where a page for One-Card Challenge may be more useful than a single post).

Meanwhile, I've started to receive a few packages in the mail now that the holidays are over. I'm behind as always, but here are a few cards from Kyle and JABO's Baseball Card Blog. 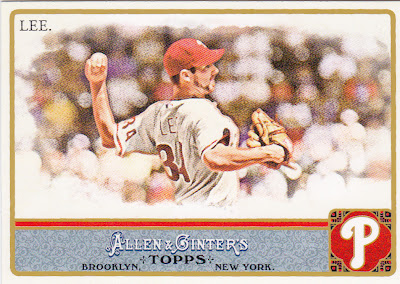 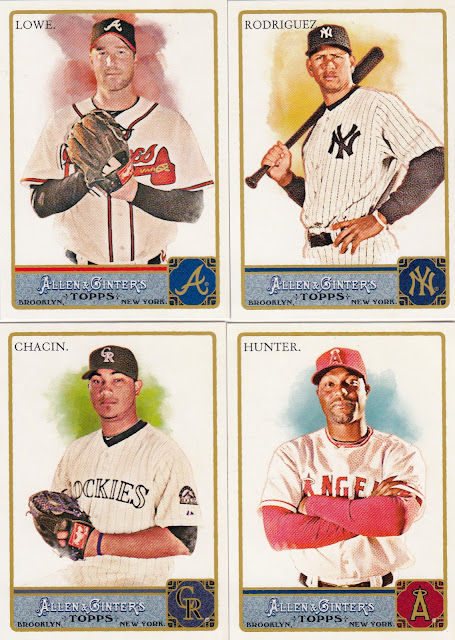 After going weeks without a single A&G need filled, the wheels are in motion on getting this set completed. It won't be done before Topps base comes out. But I hope to finish it off before the spring. 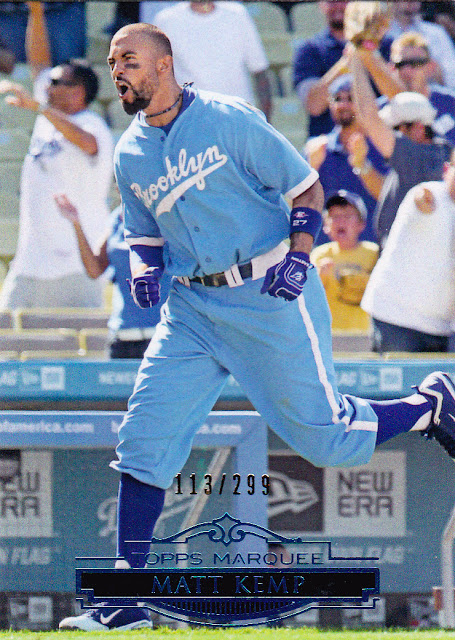 This is the card that I wanted though. The parallels for Topps Marquee are as pointlessly goofy as anything Upper Deck did, but the rest of the card is fantastic.

This is my first Marquee card and I can't think of a better one to have. It pretty much sums up the season Matt Kemp had last year.

It's amazing how much one card can make a difference.

On another note the Cardboard APB blog I started and abandoned is available for turning into a one card challenge blog.
January 11, 2012 at 8:04 PM

hiflew said…
As much as I dislike the Dodgers, I do LOVE the powder blue Brooklyn unis.

But nothing tops your checklist. I had never seen the 63 Fleer checklist until you mentioned this. I know it's overused and almost a cliche now, but I have to say it.

Captain Canuck said…
why thank you kind sir. I shamefully had no idea it was Murph.

Kbrewster/90 said…
That Kemp is one of the greatest cards of All-Time!