Popular topics: he played for THAT team? 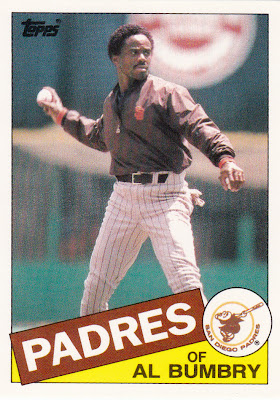 There are certain topics that circulate through the blogs over and over again. Sometimes the same topic comes in bunches, only to disappear for awhile, and then re-emerge a year or two later when new blogs start up.

One of these topics is finding cards of players on teams for which you never knew they played. It pops up repeatedly. Jose Canseco as an Expo is often cited. Al Oliver as a Dodger is another one. There are probably many more that I forget.

I decided to finally do a post on this, just to keep my blogger license. You have to write about this topic -- and players with goofy hair -- or "they" will come and find you and tell you can't waste your time rambling about cards anymore.

I didn't have a lot of time to dig up cards, so I went directly to my Topps Traded sets, since that's where a lot of these examples occur. I don't have all the Traded sets, or even half of them -- including some pretty common issues, like from the late '80s. So I know I'm missing a ton of examples. But none of these posts are intended to be research paper sources. You want the definitive, it's all on you, dude/dudette.

But here is what I found that surprised me when I saw THAT player wearing THAT uniform: 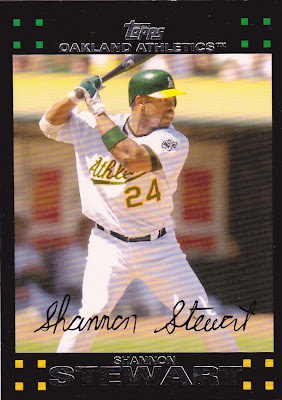 Shannon Stewart was a Blue Jay and a Twin as far as I know. Imagine my surprise when I saw this card of him in an Oakland uniform. I shouldn't really be surprised because anyone who goes to Oakland falls into a time warp and I cease to recognize him until he's dealt to another team. For the record, Stewart had a pretty good year for the A's in 2007 -- his last productive season. 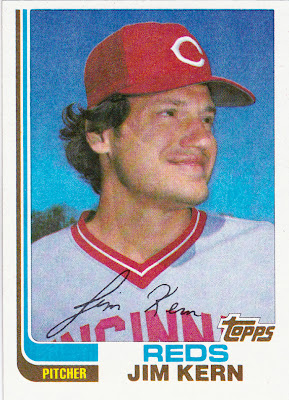 By the time the mid-1980s hit, relief pitcher Jim Kern was bouncing through a lot of teams. But I associate "The Emu" with his wild-and-crazy days with the Indians and the Rangers during the late '70s/early '80s. The Reds I don't remember at all. Probably because he didn't even pitch a full season for them in 1982. He was with the White Sox by the end of the year. 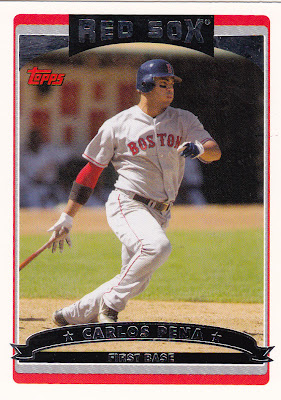 Here's a good one. How many of you remember that Carlos Pena played on the Red Sox? You lie! Boston fans probably know he played in 18 games at the end of 2006 for the Red Sox. Then he was off to Tampa Bay. 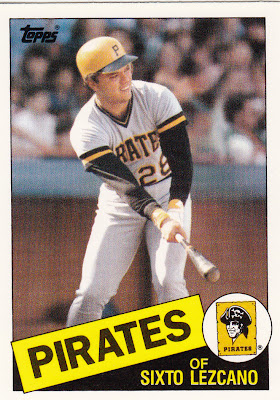 For collectors of a certain age, there is nothing like a Sixto Lezcano card. But Sixto is a Brewer first, then maybe a Cardinal and a Padre. But a Pirate? Baseball-Reference.com says he played 72 games for Pittsburgh in 1985. I don't believe it. 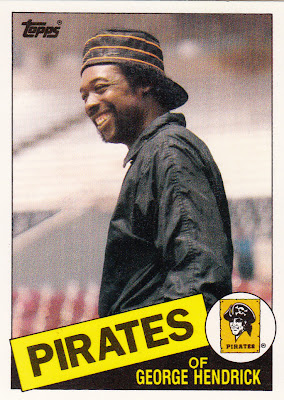 Here's another guy I don't associate with the Pirates. And I don't remember Hendrick smiling on his cards either. Maybe Topps got the wrong guy. Hendrick squeezed in 69 games with the Pirates between more memorable stints with the Indians, Padres and Angels. 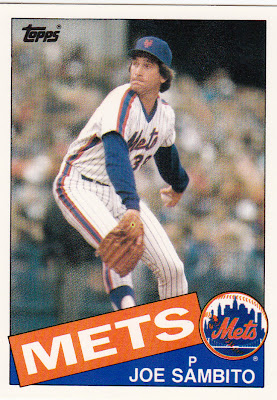 Another good one. I remember Sambito coming out of the bullpen AGAINST the Mets in key games when he was with the Astros and then later the Red Sox. But those eight games for New York (and that 12.66 ERA) completely passed me by. 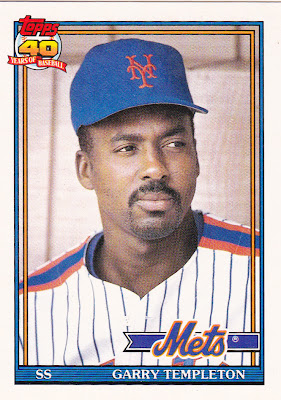 Another guy I don't remember in a Mets uni. Cardinals? Sure. Padres? Yup. But those 80 games at the end of his career in orange and blue don't register at all. 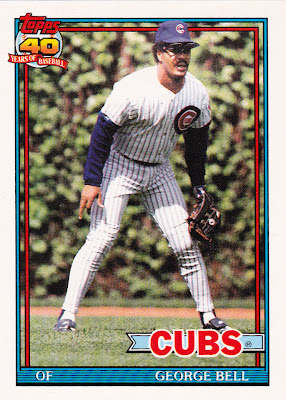 Sometimes it depends on what teams you follow. I'm sure Cubs fans remember George Bell in Wrigley Field just fine. After all, he was an All-Star in his single season with the Cubs. But it must have been too brief for me. I associate him with the Blue Jays and even with the White Sox before the Cubs. 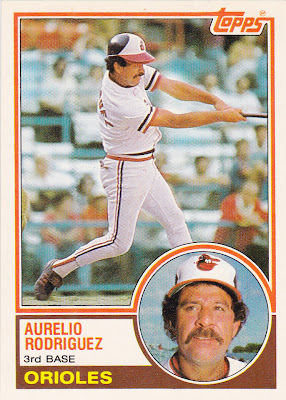 Aurelio Rodriguez played most of his career with the Tigers, but he played for a lot of other teams, too. I think I remember them all except his stint with the Orioles. He played in 45 games for Baltimore in the first half of 1983, his final season. 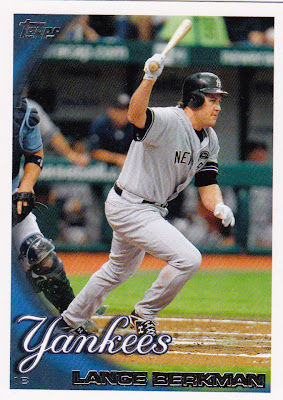 Finally, here's one that will take a little time to fit into this category. But eventually, people will look at this card and say, "Lance Berkman was a YANKEE?" And he was. For 37 games in 2010. That's it.

So, that's just a sampling of players who had stints with teams that have eluded the memory. At least this memory. Which probably isn't saying much these days.

But at least I remembered to do what I needed to do to keep my blogger license.

Yep, there's another series on this here blog.

Nick said…
Great post, arguably my favorite topic in the world of baseball cards. I just love guys in obscure uniforms for some reason. I've been planning to do a post like this in the near future as well.
January 25, 2012 at 8:04 PM

TheHitKing said…
Good article. I like the topic when it comes to players before my time. Like when I forgot Morgan was an Astro...However, modern players? it doesn't work. Berkman for example...If you are a oxygen breathing man and you watch baseball, you would know the yankees "used" him for a time. Everytime an article like this is written...someone learns something new! It is always a pleasure to read! Thanks Night Owl..keep 'em coming.
January 25, 2012 at 8:20 PM

Captain Canuck said…
thank you for not showing Murph as a Rockie.

hiflew said…
I agree the Murph as a Rockie pain is still fresh on BOTH sides. Sorry, Captain I had to.


Anyway, this is fascinating topic because part of it depends on when you started collecting. For me, my first real set collecting was 1986 Topps. To me, Sixto Lexcano has always been first and foremost a Pirate because his 86 Topps was memorable to my 9 year old brain mostly for the name. Al Bumbry fall into the same category, but oddly enough George Hendrick doesn't. The most memorable for him is Cardinals because of the stickers I collected before cards.

Spiegel83 said…
This was a cool post. There are some popular themes that card bloggers enjoy writing about. Goofy hair and mustaches is a cool one too.

Wrigley Wax said…
Cool post. Just have to make one correction. George Bell was with the Sox after his year with the Cubs. The Cubs sent Bell to the Sox for a skinny kid named Sammy Sosa.
January 25, 2012 at 9:48 PM

Yes, I know. When I said "before the Cubs," I meant I associate Bell with the White Sox before I associate him with the Cubs.

steelehere said…
You forgot to mention the one that's dearest to you.

GCA said…
Seaver as a Red Sock (is there really a singular form of that?) always gets me. Didn't watch many games in the late 80's-early 90's.
Never knew about Bumbry out west either.
I think Hendrick is just laughing at the goofy hat...
January 26, 2012 at 8:30 AM

Jason T. Carter said…
Jack Morris did a spring stint with the Reds before retiring. Jeff Reardon and Lee Smith both played for the Reds. Even Paul Konerko spent a few days playing in Cincinnati. And Dave Concepcion tried out for the Angels in spring 1989 before hanging it up for good.

deal said…
The Bumbry card looks like he is throwing out a ceremonial first pitch.
January 26, 2012 at 9:10 AM

Anthony Hughes said…
I know it doesn't fit perfectly with your theme here, but without doubt the weirdest site for me ever, that I could never get used to, was Garvey as a Padre. It was just wrong on many levels. It was topped in weirdness years later when I saw Scioscia in an Angels' uniform. I'm used to that now, though.
January 26, 2012 at 9:24 PM

Nick said…
Ryan, I've actually got three cards of Piazza as a Marlin. I'm surprised there's even one. One of my favorites in this category as well.

Section 36 said…
The Pena as a Sox leads to a big question with Sox fans. Why does Theo Epstein get so much credit for "finding" David Ortiz, but not get any blame for passing on Pena?
January 27, 2012 at 7:31 PM