January 02, 2012
I thought about listing my 2012 collecting goals as others have, but I quickly lost interest in writing about that. That's because, first, any collecting goal that I have on January 1, is likely toast by the end of the month. I've found that life absolutely hates specific collecting goals. Or goals of any kind. Life wants you to do the same thing you've always done, be the non-contributing blob you've always been, always. Life, basically, is an insecure control freak.

Secondly, I've already recorded my collecting goals for everyone to see. They're right here. I'll make any 2012 additions as soon as I know what the hell is out there.

So, instead, for tonight, I thought I'd just ramble about a few things that I've noticed, probably only of interest to me ... just like, you know, personal collecting goals. 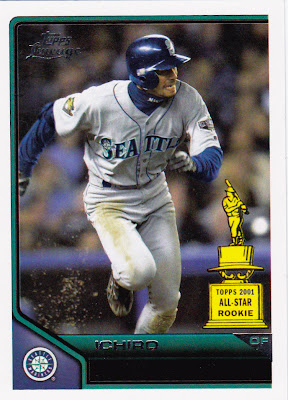 One has to do with Lineage (I promise this is one of my last posts about this set -- except for the minis). I have noticed that Lineage is a tremendously day-centric set.

So far, I've spotted only four night cards out of the 200 cards. Ichiro is one of them. 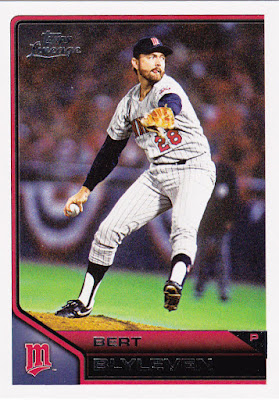 Bert Blyleven is another. This is probably taken from the 1987 World Series. Blyleven pitched Game 2 in Minneapolis and Game 5 in St. Louis. I think this is in St. Louis, based on the Dressed To the Nines site. It's too difficult to tell whether it says "Minnesota" or "Twins" across Blyleven's chest. But the site says that the Twins wore the word "Twins" with a baseball on their sleeve on the road as opposed to an interlocking T, C on their sleeve at home. 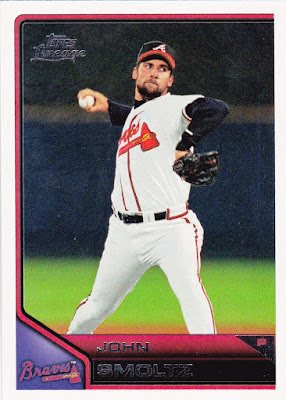 John Smoltz is the third. He pitched in a stack of postseason games, so this picture could be from any one of those or just a regular season night game. 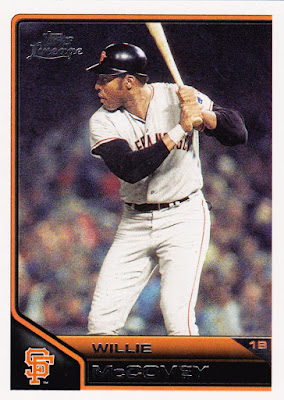 I find this one the most interesting even though it's a Giant. I'm not 100 percent sure that it's a night card, given what passed for photo technology in the '70s. McCovey played with the Giants through the 1980 season, so if it is a night game -- nice work by Topps with squeezing that in there.

I'm 33 cards short of completing Lineage and really should finish off the thing, even though I don't care about the base cards at all. But because I'm a few cards short, I may have missed a night card in the set. 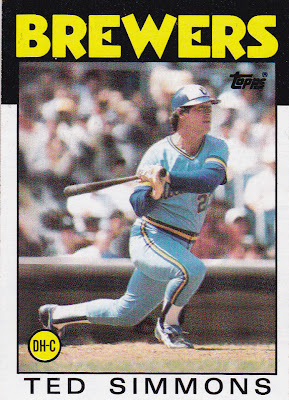 Here's another thing I've noticed. I was reading through the 1986 Topps Blog earlier today, and I saw something minor that I had never realized.

The position circle is placed in the lower left for every player card no matter what. I was under the impression that it bounced around from bottom corner to bottom corner, depending on the photo. But it doesn't. It remains committed to the left corner on principle.

It doesn't affect much. The worst that happens is the position circle covers up a foot or a leg that could been on full display if the circle was moved to the right. 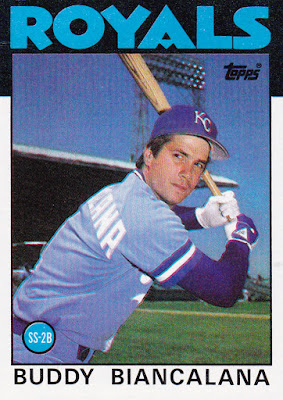 But if the circle was moved to keep from obscuring the player, we'd be prevented from the delightful visual of Buddy Biancalana appearing to be plunked in the hip by an errant blue baseball. 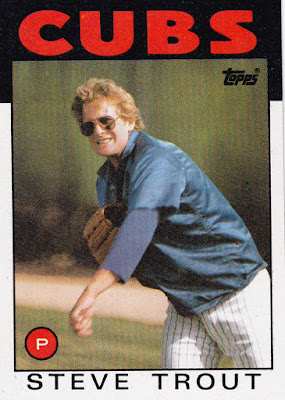 Or Steve Trout hurling what appears to be a red baseball with a monogrammed "P" on it.

Sometimes the position logo must be left alone. 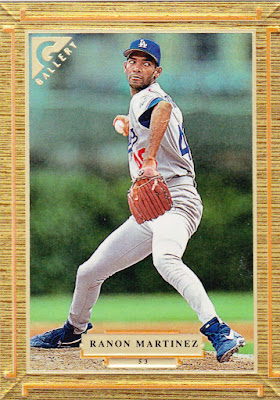 Lastly, I know that some of you are going back to work and school tomorrow after a long holiday break.

If you find yourself struggling through an unpleasant day, here is something that may put a smile on your face. It comes under the heading of "things could be worse."

You could have created a fancy Gallery baseball card and then spelled pitcher Ramon Martinez's first name as "Ranon."

I bet there was a meeting after that one.

(P.P.S: The 1985 Topps blog should be live by the time you wake up tomorrow morning!)

BASEBALL DAD said…
Some very astute observations. I had never heard of the Ranon Martinez !
January 2, 2012 at 8:16 PM

Nachos Grande said…
I didn't see your want list for the base Lineage cards - shoot me an email with what you still need, chances are I can help with a bunch of 'em.
January 2, 2012 at 10:00 PM

Two Packs A Day said…
surprised that Ranon isn't from 2011 - that's yet another blunder I'd expect Topps and the MLB to make this year. Since it happened in a past year, the Ranon just simply got by a lot of goalies! ;)
January 3, 2012 at 3:43 AM

flywheels said…
Card goals are a lot like new year's resolutions. Most of them are long forgotten by January 31st.

I already know my "goals" I wrote about on my blog earlier are changing. I think I'm going to give up set building in 2012. My wife likes the idea, my wallet likes the idea and my full monster boxes are in favor too. They often tell me they are too crowded as is!
January 3, 2012 at 4:06 PM