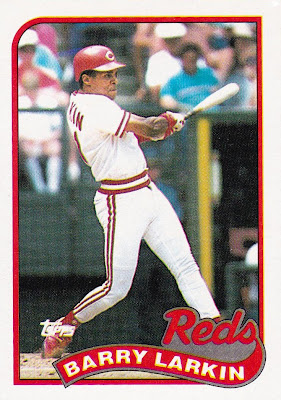 Don't get me wrong. I still tune into the announcement of who gets in each year. I still enjoy the history and listen to the speeches. I've been to the Hall enough that it will always be cool.

But I just can't get into the whole discussion anymore.

Part of this is because the people who are eligible for election are mostly players from an era in which I didn't pay a lot of attention to baseball. This was true when Roberto Alomar was elected last year, and I struggled to find cards of Alomar. I almost have to root for someone to stay on the ballot a long time -- like Bert Blyleven -- to have an eligible player to which I can relate from a rooting standpoint.

So, I'll just offer a simple congratulations to Barry Larkin. It's well-deserved. But I have about 12 of Larkin's cards.

That's pretty pathetic considering the first part of his career was during the junk wax era. But Larkin's cards were never a goal of mine, and especially when I cut myself off from collecting during Larkin's peak period. Didn't collect anyone at all then.

Here are my favorite Larkin cards of the few that I have: 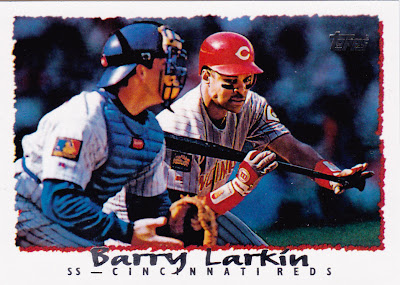 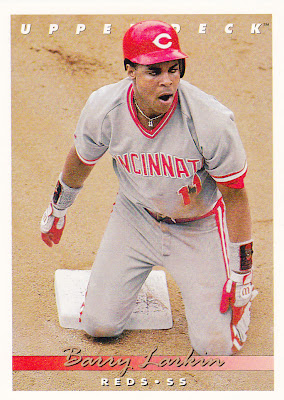 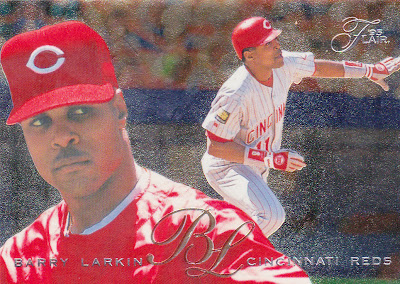 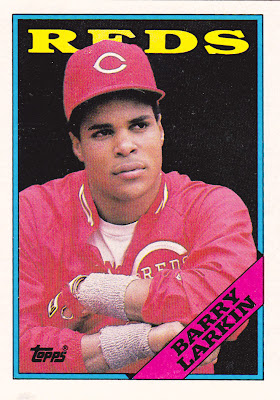 I still stand by the '88 Topps Larkin card as an all-time favorite. I love '88 Topps and I wouldn't be surprised if this card was the inspiration for Topps' Walmart all-black cards. Looks fantastic.

The others are great, too. But I know that he has many, many other fantastic cards, probably many better than this, that I don't have.

So that's all I've got about Larkin. I'm sure other Reds bloggers can give you lots of other good stuff.

I suppose this is where you expect me to address the other players who didn't get in -- who should get in, who shouldn't, who should be burned at the stake, who should have their press pass ripped up in front of them in 40 million pieces and sprinkled over their head, blah, blah, blah.

Nope. Not doing that anymore.

As recent as a few years ago, I was as fired up about the elections and inductions as anyone else. It's one of the great debatable times of the baseball season. And I was right there, debating.

But I've gotten tired of the debate. In everything, not just sports. Everything is debatable these days. Everything can be argued. There is no universal "this is great" or "this sucks" anymore. I suppose that's good. Or maybe it's not. I don't know. I just know I get weary of everyone arguing all the time. Everyone is so angry. Talk radio. Forums. Twitter. Other places that I don't want to mention or the trolls will feel validated.

Just shut the hell up. Everyone. Please.

OK, that's a little harsh. The Hall of Fame induction announcement period lives for debate. People who like to debate thrive during this period. Sure, I've got opinions, too. But maybe I just like giving them and not receiving them anymore.

Is that a sign of getting old? Or being a recluse in the woods?

The truth is, I've been growing tired of the debate for quite awhile. The fourth post I ever made here touched on that in a facetious way (Perhaps you've noticed, many of my posts are done in an attempt at humor. Apparently sometimes it misses the mark with some). That doesn't mean I have issues with others debating. There have been plenty of posts from many blogs that I know and like about the Hall today. I've read as many as I could (it's been busy again).

But they're more cut out for it than me.

"Hey, Barry Larkin's in the Hall!"

"Wanna seem some cards of him?"

Jim from Downingtown said…
Congratulations to Barry Larkin. I believe he should be in, but as with most years, I have a problem with the election process.

Larkin only got 60-something % of the vote last year, but this year gets over 80% of the vote. (The biggest 1-year percentage jump since 1948.) What is it about Larkin's stats that convinced another 20% of the people to vote for him that didn't last year?

If 40% of the voters thought he shouldn't be elected, nothing Larkin has done in the last 12 months should have changed the minds of that many voters. I believe the voters decided that SOMEONE needs to be elected each year (why, to give the machine an opportunity to pat itself on the back each year?)

If Larkin was deemed worthy this year, why not last year? So what if Alomar and Blyleven were elected last year. Each voter can select 10 names - they couldn't also elect Larkin last year, based on his career stats? (I understand the whole first ballot exclusivity nonsense, but last year was not Larkin's 1st time.)

The whole thing is a joke, and places too much importance on the opinion of (and the personal grudges/agendas of) "sportswriters".

That being said, congratulations to Barry Larkin, and to Reds' fans everywhere.
January 9, 2012 at 8:45 PM

TheHitKing said…
A friend of mine put it perfectly today...A championship is awesome, second best, a native player spending his whole career on one team. Today is a great day as every radio station and media source celebrates Mr. Larkin's success!
January 9, 2012 at 9:42 PM

dayf said…
Oh, just wait until next year. The backlog of worthy candidates is piling up and the first wave of ZOMG STAIROYDZ candidates will hit to further clutter up the ballot. In the next five years absolute chaos shall reign. Muahahahaha!!! I can't wait...
January 10, 2012 at 12:41 AM

EggRocket said…
I agree with Jim. The process is far too subjective.

Maybe we should just have Bill James pick all the inductees. Complianing would reach heretofore unreached levels, but at least there would be a standard.
January 10, 2012 at 10:58 AM

Community Gum said…
I lost pretty much all interest in the debate when Mark Grace got like 1% of the vote. Not that I think he's a Hall of Fame caliber player, stats-wise, it's just proof to myself that it (and I) am too subjective to take part. Plus the whole Ron Santo debacle. It's like the Oscars now. I love movies, just don't care about the awards anymore. -Andy
January 10, 2012 at 12:19 PM