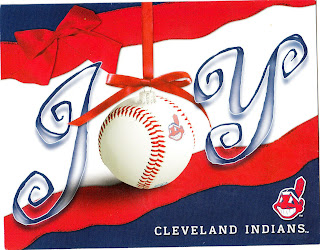 Do you remember when you were a kid and you opened your presents on Christmas eve or Christmas morning, but that wasn't the end of Christmas?

In the days that followed, relatives would arrive bringing even more presents. Or you would pack up and head to some distant location to re-celebrate Christmas with other family members.

The only thing better than one Christmas was two Christmases.

Well, the wonderful blogging community has continued that tradition, speeding up the arrival of Christmas with packages in the mail, accompanied by Merry Christmas/Happy Holiday wishes.

These people are so together. First of all, they timed their packages to arrive before the holiday. Secondly, they didn't mind waiting in some insane line at the post office to ship stuff off. So I am enjoying Christmas before Christmas arrives!

These are some of the holiday goodies I have received from bloggers. I started it off with a Christmas card from Dave of Tribe Cards. That was very nice. He admitted it wasn't my team on the front of the card, but, he said, at least there is some blue in it. I had to agree. Besides, the Indians and Dodgers have always been good trade partners. 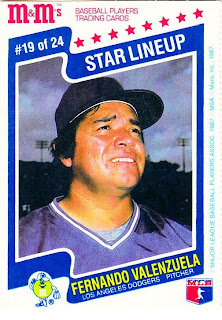 The next holiday greeting came from another Indians fan, Jack, of All Tribe Baseball. Taped to his note of Christmas cheer was this elusive Fernando Valenzuela M&Ms card. I have about 5 dupes of the Steve Sax card, so here's to Fernando! Yay! 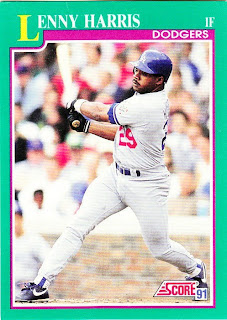 The Captain at Waxaholic shipped a couple of needed cards to me with accompanying Christmas best wishes. The Lenny Harris Score card was on the Nebulous 9 list, but now it's not! It's the last '91 Score Dodger I needed. 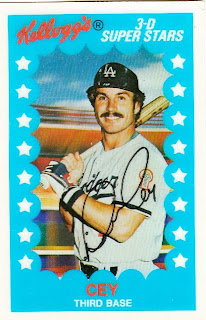 And this is a 1982 Kellogg's Ron Cey card. I had filched the image from the Waxaholic blog and then made a blatant plea for the card. Even after that unseemly behavior, Captain Canuck still sent the card to me. Awesomeness. 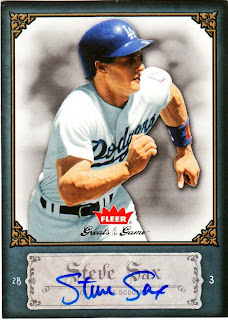 This was a part of a smattering of 2006 Fleer Greats of the Game cards from Joe M. He wished me holiday greetings with a very special package. I love this series, and was amazed to see this autograph card of Steve Sax in the middle of the package. This is my first Sax auto. 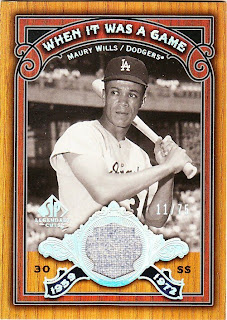 Lastly, a card from Dan of Saints From the Cheap Seats. I actually owe him a very nice Indians card in exchange for this fantastic Wills relic. Dan said he'd hold onto it for me. Then, out of the blue, he sent the card with Christmas greetings!
That is too cool.
So, to all of the bloggers, those who have sent me packages and those who haven't, a major thanks for making this a fantastic year, in spite of all the garbage that went on in the real world. You have a way of making it all better.
I'll be getting back to sending out packages next week (never fear Crawford's Cards, Hey That's Mine, Paul's Random Stuff, Mark's Ephemera, gcrl, Cards on Cards and My Pastime ... I Love it).
Meanwhile,
MERRY CHRISTMAS
From the Night Owl. It's been fun.

Spiff said…
Merry Christmas. Your blog is an everyday read and I am looking forward to another great year of it.
December 24, 2009 at 7:50 PM

zman40 said…
That is an awesome Sax card. For the earliest part of my card collecting days, he was my favorite player. Congrats and I hope you have a Merry Christmas!
December 25, 2009 at 3:26 AM

BASEBALL DAD said…
Glad you needed the M&M's card. I'm way,way behind on my blog reading and comments and posting and a lot of other things!!
December 28, 2009 at 8:07 PM