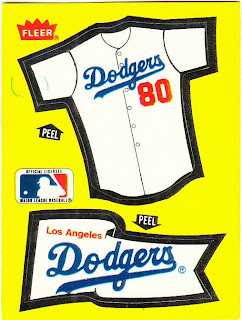 I have a question. And I want a serious answer to this, all right?

How is it possible that some of you are buying baseball cards -- and I mean boxes of baseball cards -- during the Christmas present purchasing season? I haven't bought more than a smattering of packs for an entire month so that I can afford to keep the loved ones appeased with festive gifts.

But still, others continue to feature new card purchases left and right. I know you're not all Jewish, so spill it. Where is the cash coming from? And how can I get some? And don't tell me you had some sort of Christmas Club account or something or I'll stop talking to you altogether.

Poor folk like me -- who wouldn't dare even think about something like Topps Unique during the Winter Solstice -- are forced to rely on the kindness of strangers. Well, not strangers. They're blog friends. Strangers in the flesh, but dear friends in the virtual world. Yeah, I know it's weird. Stop thinking about it, all right?

Focus on the cards.

OK, so, as I was saying, I need to rely on bloggers for my cards at this time of year. And, like an ungrateful scallywag, I fall behind on posting my thank yous. I am derelict on my trade posts. Again.

So, to make up for that, here is one from Mark. He is owner/operator of Mark's Ephemera. You can't get a warm meal there, or even a doughnut and coffee. But you can get a variety of items from a variety of sports, unlike here, where it's just blasted baseball cards and the occasional Dodger diatribe.

He sent a very nice, and eclectic, stack of cards in an attempt, I believe, to extract some Hershiser cards from me. I find it hard to believe that I have Hershiser cards that he needs. I mean, have you seen his list of Hershiser cards? It's staggering. But he insists that I do have some of his missing Hershisers. So I'll have to start looking. Just as soon as I finish my Christmas shopping.

OK, there I go again. Tangent. Focus, night owl. Cards. That's why everyone is here. 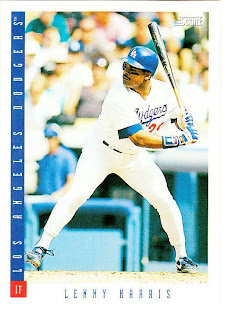 First, a 1993 Score card of Lenny Harris. Yes, I still need Dodgers from 1993 Score. I'm one of the poor kids, remember? If you want to be dazzled, go see one of those youtuber boxbreakers. I hear they have marvelous stuff. I'll just be over here playing with my '93 Score Lenny Harris, while you make rude comments about what that might mean. 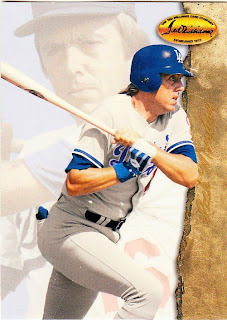 A 1994 Ted Williams Company card of Rick Monday. I always thought Monday looked like a ruthless gangster. He actually seems to be quite pleasant, but the look is menacing. 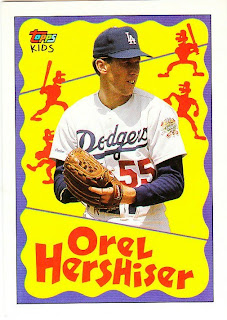 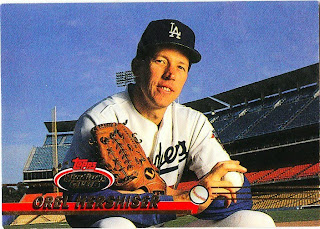 And here is another. Much better than Hershiser's Stadium Club card of two years prior. 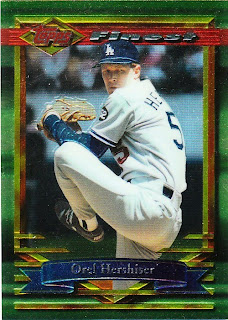 And one more. I absolutely love 1994 Topps Finest. 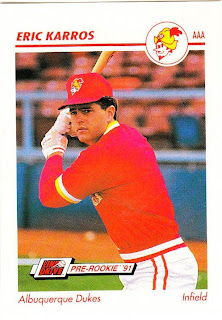 Mark did an even better job with Eric Karros cards. Here are three highlights, starting with the 1991 Line Drive card of Karros in the rocking old Albuquerque Dukes uniform. 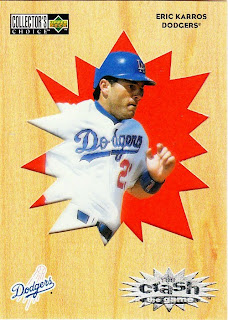 This is some sort of see-through, red filter Crash the Game insert card. A typically strange 1990s card. 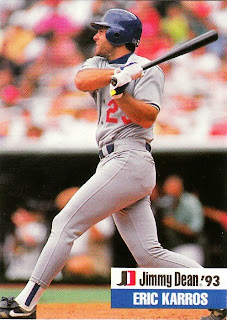 The best of all. A Jimmy Dean sausage Eric Karros card. Every time I look at it, I'll think of how sausage has to be the most unhealthy food of all-time. It's definitely the biggest grease producer. And that can't be good. 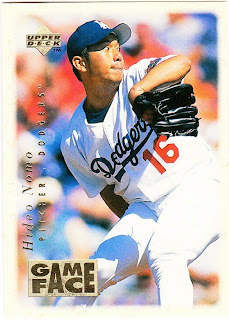 Oooh, now it's getting good. A Nomo card I didn't have yet. 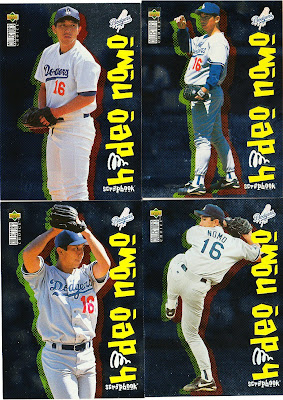 FOUR Nomo cards I didn't have! All from the same insert set. This is about as close as I'll ever get to scrapbooking. 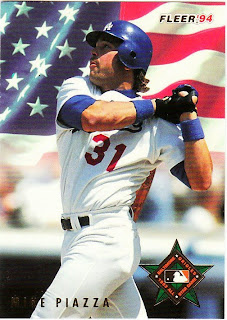 I am very slowly compiling a player inventory of all my cards. I am a long, long, long, LONG way from finishing. But I have a feeling that when I am done, I will have more Piazza cards than any other player without EVEN TRYING TO DO SO.
That's disturbing for two reasons. First of all, I would like to have the most cards of a player that I'm actually making a major attempt to collect. Second of all, I think there are more Piazza cards than eighth graders with cell phones, so I am ultimately doomed. 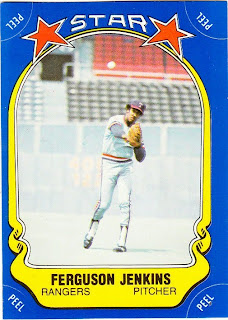 Mark will not be restricted by my Dodger and set stipulations. He sent several of these 1981 Fleer sticker "cards." And they are very cool, because they come from my first collecting period and they were items that I never saw back then. So I'm keeping them.
I selected this card because Jenkins is so tiny. It's hard to make a 6-foot-5 guy tiny. 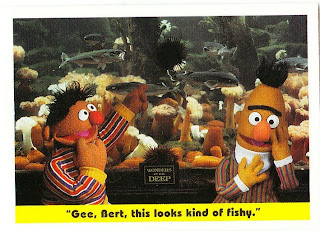 All right, this is where it gets weird. I like Sesame Street. I liked it a lot when I was 6. But I'm not sure what to make of this. Awesome Aquarium Card? 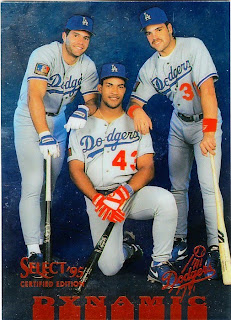 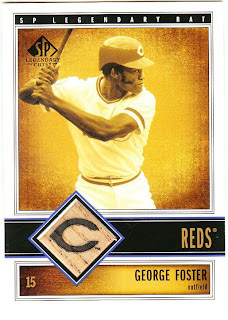 Here is a card that I expressed admiration for on Mark's blog. I think it is just about the best-designed bat card that I have ever seen. And it's of "I'm Badass and You're Not" member George Foster. I love this card. 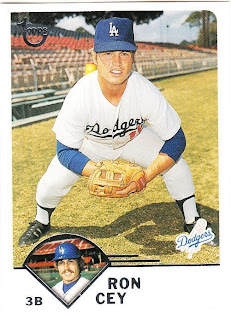 Final card. It's a 2003 Topps Retired Signature card of Ron Cey.
I want you to pay close attention to this card. It will play an important part in the Greatest Card Package Ever, which I will finally unveil next week.
That is if I ever get finished with the Christmas stuff. So, if you'll excuse me, I have some pennies to roll.
(Thanks, Mark!)

Bert looks seasick in that picture.

Sooz said…
I bought all my XMas presents for friends and family before thanksgiving. I'm one of those early shoppers.

As I shop, I see things I know people are going to like and snag them up along the way while getting great sales. :)

This leaves me money for baseball cards down the line, like right now.

Captain Canuck said…
did you check out my post on friday about how to pick up extra xmas cash??? it now appears timely.