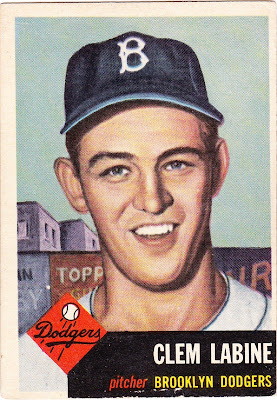 Clem Labine cards on back-to-back posts! It must be Clem Labine week here at Night Owl Cards!
Actually, the Labine card is featured because it's my only 1953 Topps Dodger card. It's here to serve as an example for the No. 9 overall card back in the countdown.
The '53 Topps card back is one of the most original card backs that there is. That's the reason it is on the countdown because overall I'm not terribly enthralled with it. The same goes with the front of the '53 Topps cards. I know that's practically sacrilegious to say here in card blog land with all the love for the painted pictures. But I can only get myself to admire their uniqueness and the effort that went into them. Just can't get into the final product.
Anyway, here is the back: