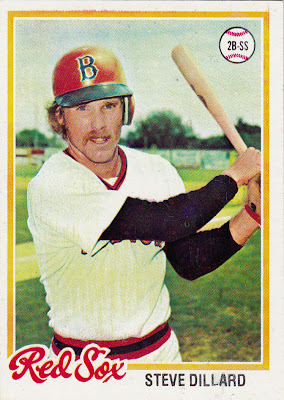 Chances are that unless you're a Red Sox fan, or familiar with one of his many managerial stints, you don't know Steve Dillard.

Well, let me clue you in.

Steve Dillard was a member of The Resistance.

He was new blood, joining the Forces Of The Just, which I watched from my underground bunker in Yankeeland. Dillard was going to boot Denny Doyle and his .240 batting average out of the Boston lineup, declare second base conquered territory, and most importantly, knock the hated Yankees on their can.

A guy like Dillard was revered in a Red Sox-loving household like mine. Any new player who arrived with Boston was treated in the same way. They were new hope for a devoted fan base who had suffered a long, long time under the tyranny of an obnoxious pinstriped ruler (older relatives taught us about those '50s and '60s teams). Boston fans would plot their strategy in a desperate quest that their plans would get to their men on the field -- Freddy, Yaz and Dewey, Rice, Burleson and Fisk.

Players like Dillard and Butch Hobson and new acquisition Dennis Eckersley gave our small, oppressed group -- keep in mind I was surrounded by noisy Yankee fans -- new life during those frustrating days and nights of the late 1970s.

Of course, Dillard didn't end up doing much other than filling in as a capable fielder at second, short or third. Second baseman Jerry Remy arrived with the Red Sox -- yet another new hope -- and Dillard was dealt away. Boston and its fans never did get anywhere in the late '70s either, and it took them almost 30 more years to finally win a title.

Dillard and the pain that Red Sox fans once felt year after year for decades is largely forgotten, thanks to two recent World Series titles in a four-year period. Fans of the Orioles, Rays and Blue Jays (not to mention the Yankees) are quick to point out Boston's spending ways and the less-than-classy behavior of some current Boston fans.

I will never think that way because of what I went through in the 1970s. I have only one direction in which to aim all of my Anti Feelings, separated by leagues, of course. I wish the worst for the Giants in the N.L. and the Yankees in the A.L. I have nothing left for any other team.

Boston may spend a lot, but I tend to think that after getting beaten down in the A.L. East year after year, they finally did what had worked for their biggest rival. Imitation is the sincerest form of flattery and in some ways (not all, mind you) the Red Sox imitated the Yankees and got results. There may be two beasts in the A.L. East now, but one beast has been doing this a lot longer.

For me, rooting for the Red Sox isn't as fun as the days of Steve Dillard and The Resistance. But when people get smug about Boston's 3-10 record, all I can think of is:

Either they're a Yankee fan or they don't remember 1977 and Steve Dillard.

Oh, and this was supposed to be a post on what color Topps used with the Red Sox for each year that it devoted specific colors based on the team that was featured.

What Topps says are the Red Sox team colors: Red and Blue 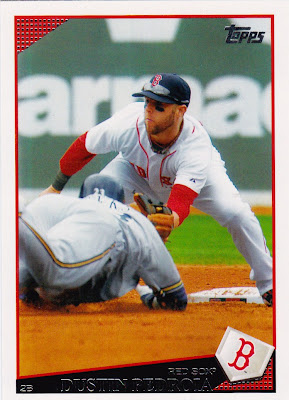 There was never a doubt.

I doubt the Red Sox will be under .500 all year either.

That's more than I can say for my team.

Wrigley Wax said…
I remember Steve Dillard! He ended up as the Cubs starting second baseman for the second half of the 1979 and spent a couple more seasons as a utility infielder. Those late '70s Cubs teams were more brutal than the BoSox...and we're still waiting for that title!
April 17, 2011 at 3:33 PM

Anonymous said…
Trivia time; On active duty submarine force in San Diego. Worked part time job with Cub's backup catcher Tim Blackwell's stepfather. Had the opportunity to take Tim, Steve Dillard, Dennis Lamp, and the bullpen catcher (forgotten his name) on a tour of the nuclear submarine, USS Haddo. They were a great group of kids and they had a great time. The Commanding Officer was a rabid Cubs fan and treated the guys like royalty. Steve also managed the Mets farm team down here in Jackson, MS for a while. Great memories!
November 2, 2011 at 8:10 PM