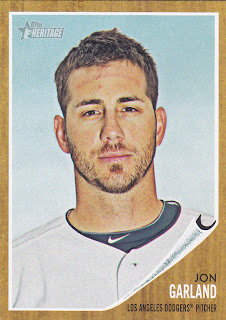 Hey, it's not stopping anyone else.

But this will be it on this blog. No more 2011 Heritage scans. Unless someone tosses me one of the two Dodger short-prints I need. Or that whole Jackie Robinson short-printed thing that I have almost pushed out of my memory. Or a Sandy Koufax autograph, which would touch off a week-long blog break so I could be resuscitated.

So until then, here are the last few 2011 Heritage cards that I care anything for: 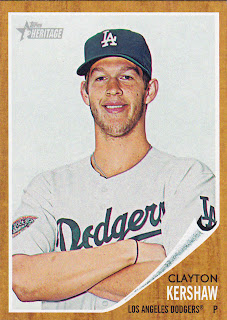 These come from Joe at Cobb and Halladay. He is collecting the set. Help him out if you can. Here is my favorite Dodger. He is throwing off the curve of mediocrity that is the Dodgers thus far this season. His last start excluded. 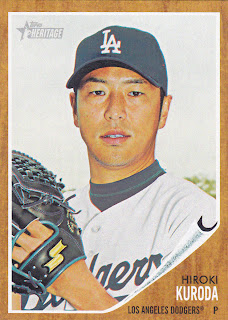 Another guy who has pitched tremendously until his most recent start. I like that glove he's got there, too. 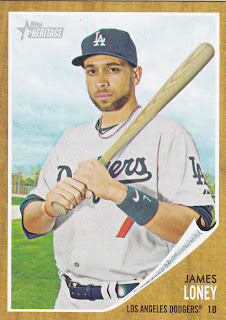 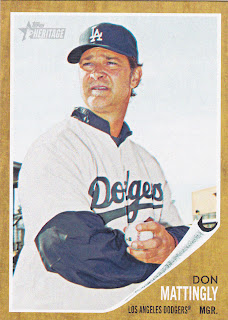 I like showing this card just because it still makes some Yankees fans' underwear bunchy. Mattingly even has the old-school windbreaker-under-the-uniform look going. 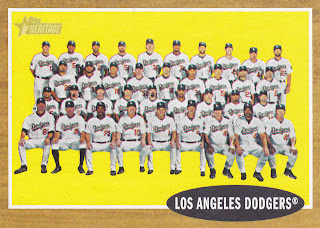 Fortunately, this team card does not exhibit the leg-less and torso-less players that we fear exist, thanks to this card. I still can't wait until Heritage gets out of the 1960s and scraps the awful yellow and red (and later, blue) backgrounds. 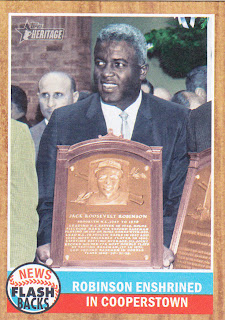 These cards completed the non-shortprint Dodgers team set for me. I still need to chase down Russ Mitchell and the rookies floating head card that features Kenley Jansen, but I'm not worried about those.

Meanwhile, there are parallels, chromeys, etc., that I'll take as they come in or purchase as the mood strikes. But I'm not desperate to land them immediately. I'm on wood-panel overload. 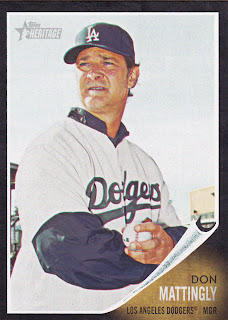 Here is a nice alternative. This is the first black-border Dodger that I've received. It came from Chris at Nachos Grande, who pulls way more Dodgers than I ever do.

I have another Mattingly parallel on the way, too. He's also not wearing pinstripes in that one. Hee-hee. 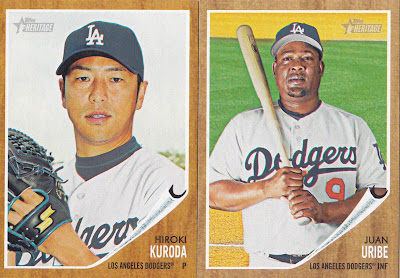 Matt F. of Heartbreaking Cards sent these two Heritage cards, which had already arrived at my home. But he threw in another nice little item. 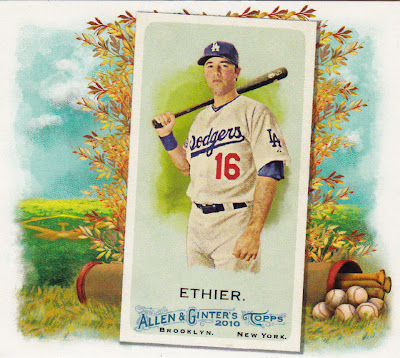 I actually do like these cards a lot. I'm tempted to cut the "card" out since it's in mini-form and I am majorly lacking in Dodgers from last year's A&G minis. But don't worry, I won't.

It does look like a breath of fresh air after all that paneling, doesn't it?

That must mean I'm ready for some A&G.

Can't wait for that.

Then we'll REALLY see some overkill.

Oh, Captain Canuck is helping me out with a poll regarding what I should do with Alyssa Milano's pic over on the sidebar. Voting could help me make my decision -- unless Kim Kardashian wins and then I'll just have to figure it for myself because obviously you can't handle a basic, fundamental decision about attractiveness.

I believe I've already come up with an answer, thanks to some of the comments. So I'm much obliged and all that.  But head on over to Waxaholic and vote. He's a good bud for doing this.

Anonymous said…
Something about the Mattingly... I like. Most of these Heritage cards are dull shots that are overphotoshop'd IMHO.
April 18, 2011 at 10:02 PM