The best rookie card ever 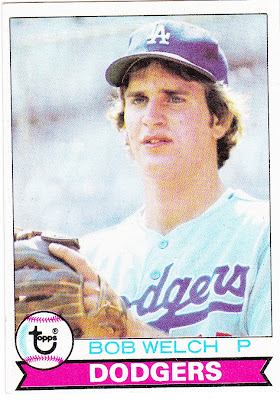 The other day Matt F. posted this card during his rookie card series on his blog. This is a card that releases many memories for me. So when I saw it, I wrote what I felt at that moment: "The best rookie card ever."

Matt came back with "That's some bold talk!" and he's right, it is.

I was only thinking about what the card meant to me. If we are classifying cards by their "rookieness," then that's the rookie card that means the most to me, therefore, it is "the best rookie card ever" in terms of my experience. (But it's not my favorite rookie card).

But then I started to think about what Matt said. My comment could be taken in another way -- that I think this is THE best rookie card and should be judged as the best rookie card when stacked with all the other notable rookie cards in history.

Then, yes, that's definitely some bold talk. But, what the hell, I've been known to have an opinion. I've been paid to write a newspaper column a time or two, and they don't let you do that unless you have something to say. So let's see if I can justify "the best rookie card ever" statement in the broader sense of the idea.

Most of the time, if a player had only a handful of at-bats in the majors, he would end up on one of those 3- or 4-player rookie cards, which was a perfectly appropriate place for him. He hadn't measured up to the players who had received their own card yet. Let him share the card with a bunch of nobodies.

It was one of the biggest World Series moments in Dodger history, and my favorite Series moment up to that point. So, the following year, when the 1979 Topps cards hit the drug store racks and I found out that Welch was in the set, I had to have that card.

What a glorious moment it was when I finally acquired it (I think I ended up trading for it, and I probably gave up too much). I had the first card of Bob Welch, who struck out Reggie Jackson with two men on and two men out in the 9th inning of Game 2 of the World Series!

To me, this feeling is much better than owning the rookie card of someone, who when you turn over the card, reveals that they have "no major league experience."

Sure, those players may end up being the greatest of all-time, and that's what prospecting is all about, but I'd rather deal in the "right now." Right now, this guy is tearing up Double A, and I have no interest.

I'm sure lots of collectors have been hoarding Brandon Belt cards for a couple of years. What a relief it must have been for them to see him hit a home run last night against the Dodgers. The potential pay-off to months of accumulation. Sure, Belt has been a "can't miss" kind of guy and rocketed through the minors, but life is unpredictable. I don't need that hanging over my head in what is a hobby for me.

I would have valued Buster Posey's 2011 Topps card much more, after his 2010 World Series performance, had it been the first card issued of Posey. But since there are so many Posey cards already, I look at it with a shrug of the shoulders.

Rookie card: 1992 Mike Piazza
MLB resume at the time it was issued: 1992 was his first big-league season

Rookie card: 2001 Albert Pujols
MLB resume at the time it was issued: 2001 was his first big-league season

Rookie card: 1979 Bob Welch
MLB resume at the time it was issued: struck out freakin' Reggie Jackson in the ninth inning of Game 2 of the World Series!!!!

Not much of a comparison.

Now, that's not to say that there aren't other rookie cards of players that match Welch in terms of accomplishments. Off the top of my head, I can think of Wade Boggs, Ozzie Smith and Kirby Puckett, each of whom had achieved a fine season already by the time their rookie card arrived. And I'm sure there are several others. But this is where my favorite-team bias comes in: Welch played for the DODGERS. Those other guys didn't.

Even with people like Welch, Boggs, Smith and Puckett, the vast majority of rookie cards over the last quarter of a century feature players who haven't achieved a damn thing in the major leagues. Every Bowman set 10 years old and up is a graveyard of players who never met their potential or didn't have much potential to start.

steelehere said…
Great post. I actually went to the Welch/Jackson World Series Game and still have the ticket stub from when I was a kid. If I ever get back to writing posts, I need write about my experiences from that game.

On a different note, I attended my first Dodger game today and realized it's going to be a long season if the Dodgers' are regularly starting these five players (Hector Gimenez, Aaron Miles, Jamey Carroll, Ivan DeJesus, and Xavier Paul) all at the same time.
April 2, 2011 at 10:51 PM

Jim from Downingtown said…
First, you have to consider the workings of the card world back in the 1970s. Players wouldn't receive a card unless they had made some sort of impact in the major leagues. Sure, they could have had only 10 at-bats in the majors, but at least they had worn a major league uniform in a major league game.

Most of the time, if a player had only a handful of at-bats in the majors, he would end up on one of those 3- or 4-player rookie cards, which was a perfectly appropriate place for him. He hadn't measured up to the players who had received their own card yet. Let him share the card with a bunch of nobodies.

steelehere said…
Jim,
In defense of Night Owl's post, cards from Topps sets released in 1973 and years prior were issued in series throughout the course of the season. In the case of Brubaker, his card was issued in series three, which came out during the 1967 season and after he played his first major league game.

Baseball Reference notes that the Dodgers selected Bruce in the December 1966 Rule V draft. On the assumption that the Dodgers were going to keep him on their roster the entire season (which is common of Rule V draftees that make team's opening day rosters), they probably chose to produce his baseball card.

He did start the 1967 season on the Dodgers roster and pitched one less than steller game on April 15th, 1967. Unfortunately for Bruce, the Dodgers offered him back to the Phillies but they refused to take him back. This resulted in the Dodgers demoting him for AAA for the rest of the season.
April 3, 2011 at 1:34 AM

gcrl said…
i could not wait for the 79 cards to come out so that i could have a bobby welch card and show it to the yankee fan who lived across the street. small victories until 1981.
April 3, 2011 at 8:41 AM

Oh, I wasn't ripping Night Owl. I was poking fun at Topps' decision to put Brubaker (with NO prior major-league experience) on a full card, while others were relegated to half a card (Reggie Smith, Tom Seaver, Rod Carew, etc) or no card at all (veteran Lenny Green, rookie Gary Nolan, etc).
April 3, 2011 at 10:55 AM