April 16, 2011
For the first time, I am showing more than one night card in one of these ANC posts. That may cause an issue if/when there is another night card tournament, but we can't worry our little heads about the future, can we?

I recently received four more of the Stadium Lights insert cards from this year's Opening Day. 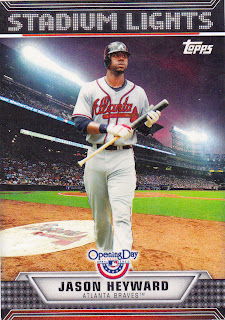 These two came from Spiff of Texas Rangers Cards. 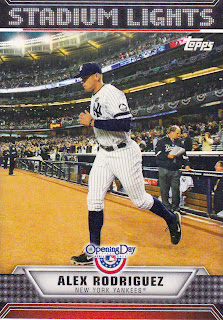 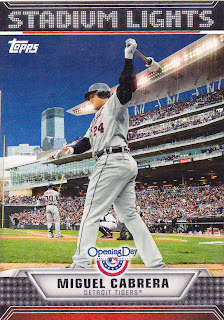 These two came from J.T. at The Writer's Journey.

I still think this is the best insert series in all of 2011. It beats the hell out of those Kimball Flimsies.

I now have six of the 10 cards in the set. I'm missing #2 Troy "Can We Play the Mets All the Time" Tulowitzki, #3 Robinson "John Sterling Get Off the Radio" Cano, #6 Chase "I'm Going to Miss the Whole @##$&* Phillies Championship Season" Utley and #8 Adrian "I'm Not Really Wearing a Red Sox Uniform" Gonzalez.

If you have any of those four, I'm interested. But know that it may take me awhile to coordinate a trade as I'm rather behind once again.

As you know, these cards glow in the dark. And as usual, I had to try them out again. Very cool. Alex Rodriguez glows more than the rest of them, which I suspected. We may have to call in the government.

Much thanks to both Spiff and J.T. for sending these along. Per usual, they sent other goodies.

I received this card from Spiff: 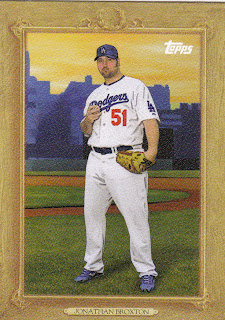 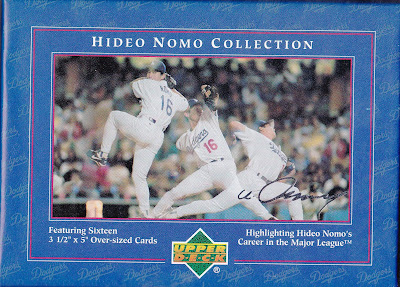 It is a jewel-type box of oversized Hideo Nomo cards. This was issued during the height of Nomomania. As you can see, this set highlights Hideo Nomo's career in the Major League(s), which at the time was one whole year long. 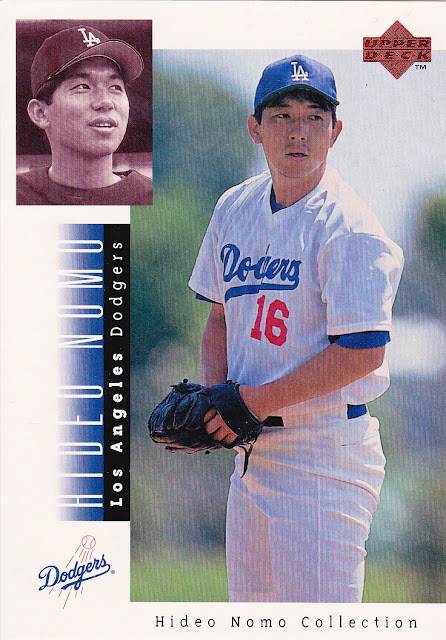 The best part about it (besides the box) is that it sent me over the 300 mark for unique Hideo Nomo cards, which is the most of any of my player collections. It's also predictable since Nomo seems to have an infinite number of cards. 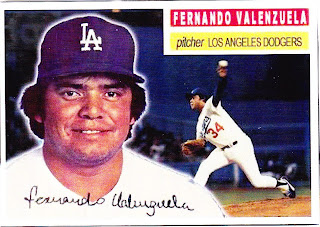 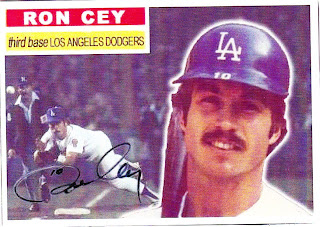 The Penguin!!! Look at the mustache crowd at the far left. It's like the same family decided to field a team and umping crew in the World Series.

By the way, I believe both of these cards are night cards.

And this is where I'll end it, because Blogger is being odd with image loading right now.

Not that I had any more images to load.

Big Sexy said…
Hi, I have Chase Utley and Troy Tulowitzki Under the Lights Cards if you're interested.
April 17, 2011 at 1:30 PM

Spiff said…
Glad you could use one of the extra Dodgers I sent. Those Under the Lights cards are really pretty cool.
April 18, 2011 at 8:29 PM