Breaking through the '71 Topps wall 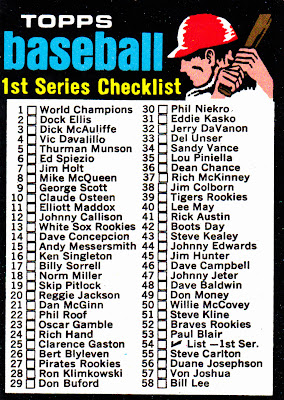 Of all the vintage Topps sets, 1971 holds the greatest mystique. It has been that way from childhood to adulthood for me. The '71 cards were the first "old" cards I ever knew, possessed by older boys in the neighborhood. They were mysterious.

The look of the cards added to the mystique, the pitch-black borders, and the bright, neon fonts. As someone attracted to dusk-till-dawn occurrences, this intrigued me at an early age.

As an adult, and a collector, '71 Topps held its aura, mostly because of the great Hall of Famers and all-stars who played before my time and because of the high numbered series, which were difficult to obtain and often way out of my price range. The '71 set has been like a wall that I have never been able to bust through.

But, finally, I am breaking through. Maybe not Rodney McCray style. But much slower.

Over the last few years, I have acquired most of the '71 set, both on my own and thanks to great collectors across the country. In the last few weeks I have gained a few more 71s, both at a card show and online, where I found some high numbers that were surprisingly cheap and in good shape.

But the defining moment of my '71 chase may have occurred when I received a package from grogg of Nearly Mint. It not only undermined the perception of a complete '71 Topps set as unobtainable, it obliterated it.

The first card in the package was the checklist you see above. It's a mere checklist, but it is the last checklist I needed and a terrific representation of all that is tremendous about 1971 Topps.

But let's move on. 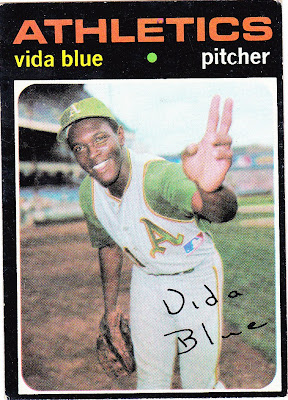 This has been an iconic card for me ever since my first year of collecting in 1975. Before I even saw a '71 card in my own hands, this was epic cardboard because of this card, which came out of the first packs I ever bought. Peace, Vida. 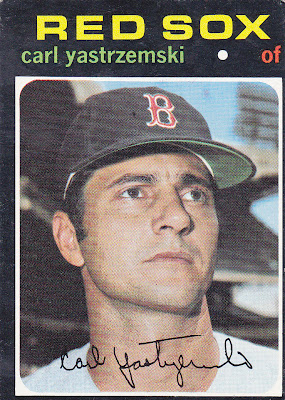 Yaz is now in my possession. You don't know how many times I have looked through one particular dealer's binder of '71s and failed to find a Yastrzemski card. The binder skips from #529 to #531. No need to look anymore. Yaz appears desperate to find a way out of Yankee Stadium. 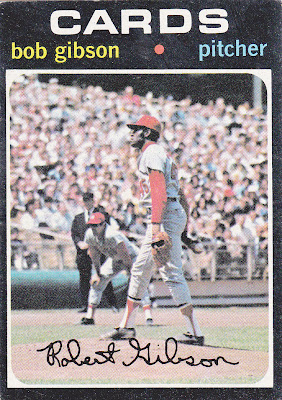 In the great '71 scheme of things, the Gibson card isn't that unattainable. But I think I've been intimidated all these years. First, there's Gibby, the master intimidator. Then there is the '71 set, as intimidating as they come. Then there is the terrific action photo. I couldn't help but think people would demand a ransom for this card because of the photo. I know if someone wants to obtain it from me now, they'll have to do the same. 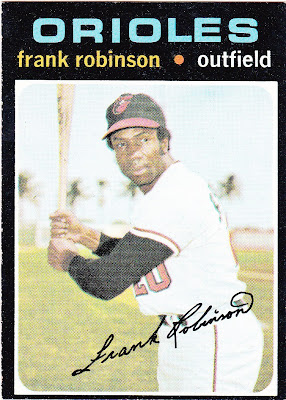 OK, youngsters, break out your shizzle, fizzle words, or whatever the heck you're using these days. We've hit the crossroads of everything that makes '71 Topps what it is. Hall of Fame player. High number. Frank Robinson is both. He is also a once unobtainable card now obtained. Good golly, I can't believe it.

That would be enough by itself, right? Vida, Yaz, Gibby, and FRobby?

Sure, if I merely wanted to poke the mystique of '71 Topps. Bruise it a little. Make it break out the bandages. That would be fine.

But that's not what I want to do. That's not what grogg wanted to do, I think. The only mission is shattering it. Breaking that mystique wall into tiny, little pieces. 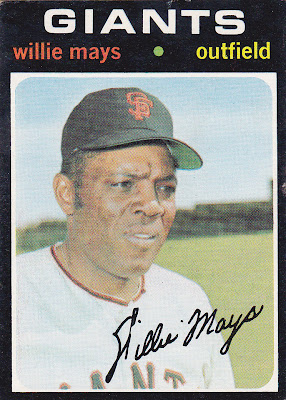 Say Hey! High Number Willie Mays is now a member of my '71 collection! WOW! I am without speech.

My hope is that grogg received a great deal on this card only because no one should be spending cash like that on me. It looks in fantastic shape, but he did point out the back, which has some paper loss: 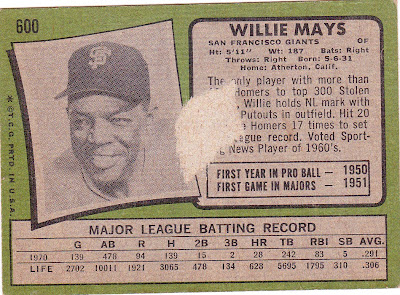 I don't care one speck about that. There are a few other '71s in my collection that have similar card back issues. It doesn't make me look at any of my '71s in a lesser light.

This is a significantly nice package that I received from Greg. He's got one hell of a card shop around him. I know I can't match what he sent (he sent several other great cards, which you will see in part 2 of this post), but I have gotten off to a pretty good start. Hopefully, with a little more poking around, I'll have something satisfactory to ship off.

Meanwhile, I have now completed 97.1 percent of the 1971 set. Just 22 cards to go. Most of these are high numbers that are a little pricey, but not all that unapproachable. I should be able to knock off most of them by saving a little cash.

The two major obstacles are the Dusty Baker-Don Baylor rookie card and Roberto Clemente. I looked around for a reasonably priced Clemente at the card show the other day. Nothing to be found.

But out of all the sets that I have collected since I have been blogging, this is the one that has amazed me the most, and one in which I now know that nothing is impossible. I have learned to expect the unexpected and am grateful for every last card.

The wall is coming down.

Thanks to all who have shown what can be achieved in this hobby. Card collectors are among the most charitable people I know.

carlsonjok said…
When I got back into collecting in November, I decided to collect the sets that I grew up with, which basically meant the 1970s. 1978 was pretty easy. 1974 was a little harder because it was a little more expensive. I look forward to 1971 and 1972 with no small degree of trepidation because of the high number series and the key stars like Clemente.
April 13, 2011 at 8:41 PM

AdamE said…
Wow nice stuff. I got an amazing package today also, what are the odds. Mine however cane from O No Another Orioles Blog...

Eggrocket said…
Great cards.
I finally completed my '71 about a year ago. The Baylor/Baker card was one of the last holdouts for me as well, certainly the last bigger tickets. And I found the same generosity with other collectors as you. I met someone in New York while I was there and as we waited at the Newark airport together (he was flying to Denver, I to Iowa) I commented (a bit sheepishly) that I wished I had the opportunity to hit a card shop while I was there, but simply had no time.
Turns out he was a collector as a kid, he was just a shade older than me (which put him in prime 1969-1972 Topps territory) and he thought he might have some of his cards as a kid. He got my address and a month later I got a box of cards including ALL of the 1971s I needed to finish off the set (I was probably down to about 10-12 at that point.) He also sent me a good supply of 1969s for good measure.
Collecting is fun, completing is a thrill. But finding others with a similar interest is one of the best things about this hobby.
Congrats on edging ever closer to a 1971 set. That will be a great binder to look through.
April 14, 2011 at 1:06 AM

Yankeejetsfan said…
I have always wanted to put this set together, as it is the year of my birth. For now, I am working on the Yankees team set. Then I'll probably attempt the rest.