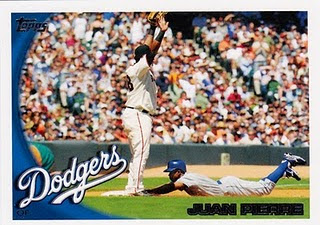 When I was a kid, watching my parents sit down on the floor was most comical. They seemed to move from standing position to floor-sitting position in stages. Those stages were equipped with grunts and groans as they maneuvered into a cross-legged position that looked almost painful.

I like to think that I'm younger than they were at my age. In fact, I try to sit and roll and slide on the floor as often as possible. But, I have to admit that it's not quite as easy getting up afterward as it once was.

Like most kids, I spent a great deal of time with my butt connected to the floor or the ground or the sidewalk. Staying rooted to mother earth made the most sense and much of the fun that I experienced as a child was at ground level.

I played with my cards by dumping them on the floor and organizing them in myriad ways. This was before binders and pages. So, if you wanted to organize your cards, you threw them on the floor and either lined them up on the linoleum or shuffled them in order and sealed them together with a double-winded rubber band.

I was a set-collector from the very start, and even though I didn't have the money to seriously attempt to finish off an entire Topps set until I was a teenager, I did all the things that set-collectors do. One of those things was organizing my set by teams. I'd sit on the floor and create stacks for each team. I would organize them in rows by divisions. Back in the day, there were only 24 or 26 teams and just four divisions. Organizing in this fashion was easy.

While organizing them, I'd take note of the best card for each team, even though I didn't have a complete set. It was interesting to see which teams had the best cards and which had the worst.

This was a seasonal ritual as a kid, but I haven't done it for a long, long time.

I've decided that for every complete set that I own, that I am going to go through and figure out the best card for each team, and feature them here.

I'm starting with last year's Topps set. The 2010 set is a little unusual in that Topps also had "franchise history" cards and team cards with celebrations on those cards. I've eliminated those cards, because when I was young, those cards didn't exist, and the intent was to see whose current player's card was the best on the team.

So, upcoming is a look at what I think are the best cards for each team in the 2010 Topps set. I grouped them together by division, to cut down on the length of the post, and to stay true the way I separated them as a kid. That means the images might be a little small. But you can always click on them if you want to biggie-size them.

For the record, I didn't get down on the floor to do this. I sat at a table. I am so old. 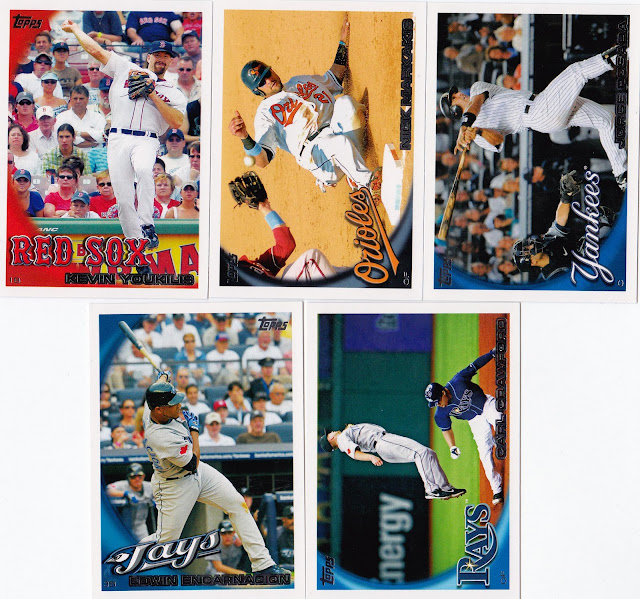 Team with the best cards: Red Sox. Easily. I would have been happy selecting five of them as the best. But the Kevin Youkilis card is an easy pick (I don't get that people don't like this card).

Team with the worst cards: Orioles. Thank goodness the Markakis card arrived. A bunch of mediocrity before that.

Team that I should go back and review: Blue Jays. There wasn't much to choose. I picked Encarnacion because it's a nice shot and I like the "Blue Jay-ness" of it, right down to the maple leaf. But there's probably something better that I missed. 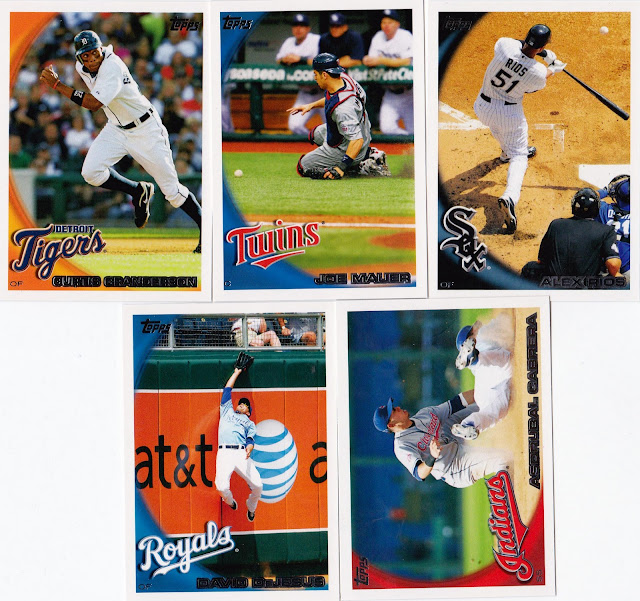 Team with the best cards: That's tough. Probably the Twins. I had to leave out the Denard Span card.

Team with the worst cards: Tie between the White Sox and Indians. Nothing very exciting when you compare these two teams with other teams' cards.

Team that I should go back and review: Tigers. I had the Wilkin Ramirez card selected, but all the empty seats in the background annoyed me. I think Granderson is a very fitting card. But I should look again. 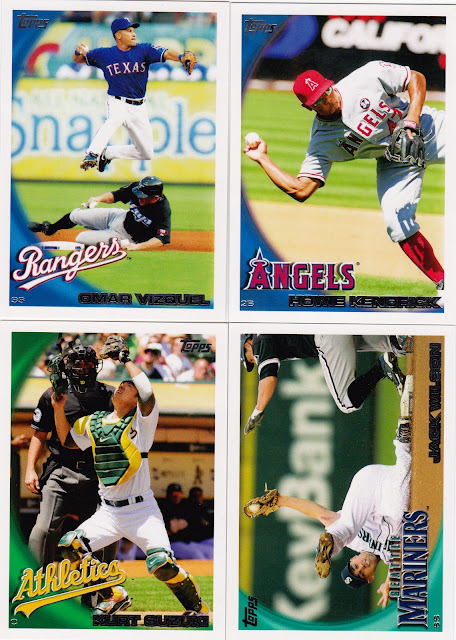 Team with the best cards: Easily the Rangers. The Vizquel card is tremendous, so I didn't consider any other Rangers. But they have several nice cards.

Team with the worst cards: Angels, although the A's are a close second. I'm not crazy about the Kendrick card, but I couldn't find anything else. Even Vladdy pointing to the sky bores me.

Team I should go back and review: Angels. I just can't believe all their cards were that dull. 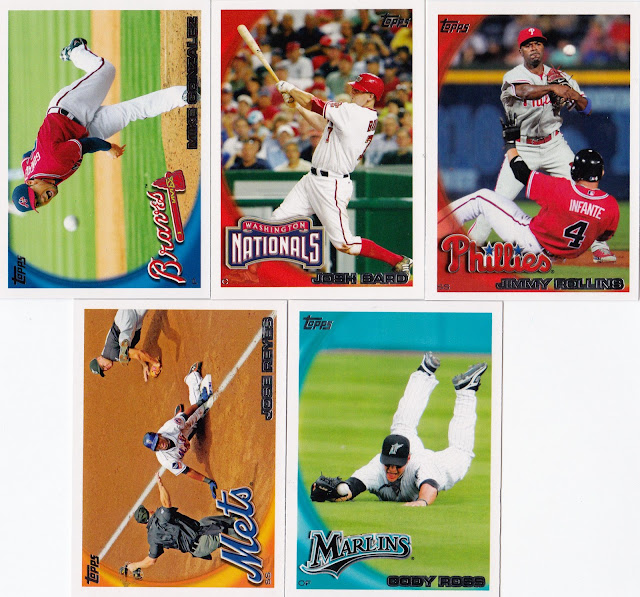 Team with the best cards: Mets. Even the David Wright card didn't make the cut.

Team with the worst cards: Nationals. The Bard card impresses me, but it's really nothing special.

Team I should go back and review: Nationals. I am lulled to sleep by that team. I bet I missed something. 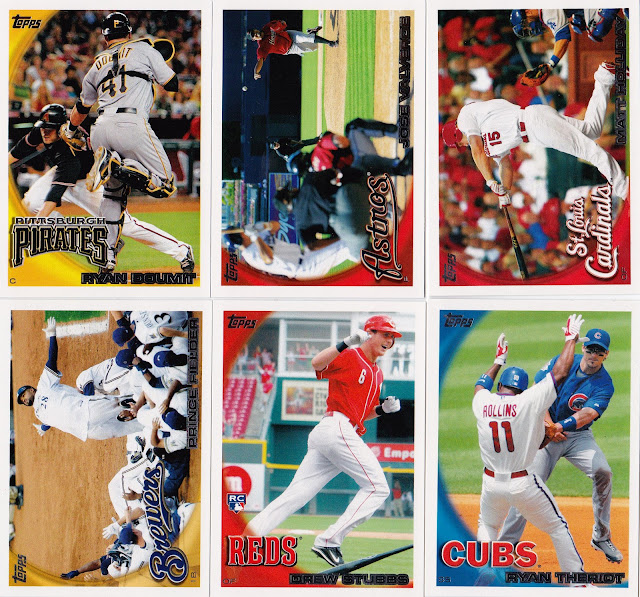 Team with the worst cards: A toss-up between the Astros and Cardinals. It's a big drop-off after the Valverde and Holliday cards. 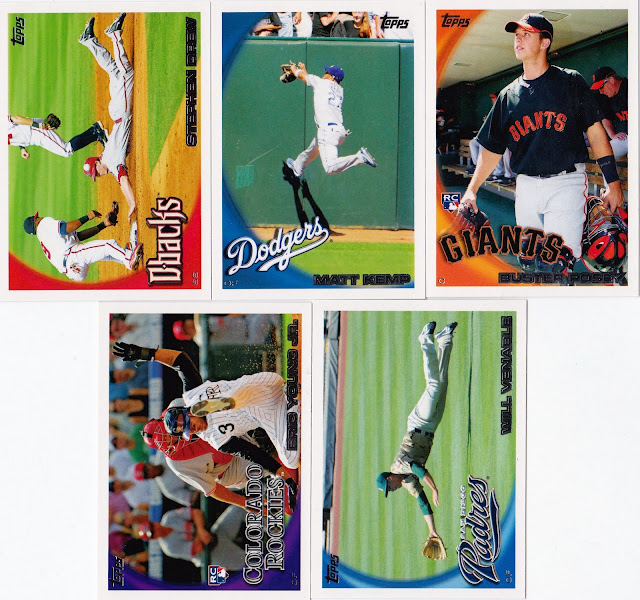 Team with the best cards: Diamondbacks. I was surprised by how many great action cards they had. I never pay attention to that team.

Team with the worst cards: Padres. It was like pulling teeth to find a card I liked.

Team I should go back and review: Giants. I stayed with Posey just because I think it's a wonderfully representative card. But there might be better.

There are lots of nice cards that got left out, such as the Juan Pierre card at the top of the post. But that's been part of the fun of this exercise ever since I was 10 or 11. Find which player has the best of the best.

I'll be interested in seeing how this goes for a lot of my complete sets, especially ones like 1993 Upper Deck or ones from my childhood like 1978 or 1980 Topps. Then there will be the supremely difficult ones like 1984 Topps or 1988 Score.

I may even have to sit down on the floor for those ones.

hiflew said…
Man your last few ideas are why I consider you one the best baseball card bloggers around. The idea is so simple and yet I didn't think of it and I have seen any other blogs doing it either.

Kudos and I look forward to reading more.

I'll definitely be doing '86 Topps as it's one of my complete sets.

GCA said…
I've always sorted my sets into teams. The leaders cards on the front page, world series, checklists, then either teams sorted by finish or my own preference. (Whichever way gets my favorite team up front). Team cards go first, then big stars (when I take them out of the big star book), then manager, then the rest with rookies at the end. (Yes, I think they are the least significant)
I just never liked the random mix of a set by the numbers, especially since the stars etc. are all over the place.
My friend encouraged me to keep my newest set in # order to get a sense of how it was intended. I'll try for a while, but will probably redo it when I get close to finishing, which will probably be a while...
April 5, 2011 at 8:12 AM