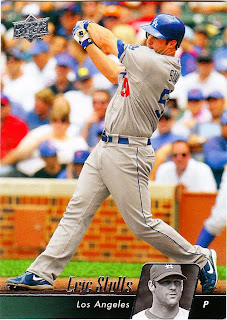 What I want to know is how you feel about pitchers batting ... on baseball cards.

Photos of pitchers batting on baseball cards was a phenomenon, I assume, created by Upper Deck. Or maybe it was Fleer, since Fleer was the one that kicked off the candid baseball card photo trend before Upper Deck swooped in and took all credit.

But anyway, Upper Deck and just about everyone else now has used the occasional photo of a pitcher batting.

Look there's another one now. 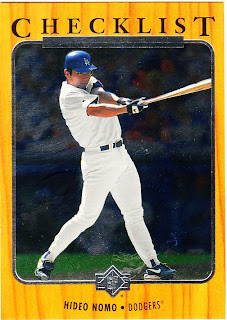 To me, these cards were amusing the first few times I saw them.

There needs to be at least one card per set that shows an action photo of a pitcher batting. The awkward swing, the poor form, the misplaced determination. It's the perfect way to turn what could be a boring pitcher's pose card into something memorable. Everyone needs a good laugh.

Seeing a pitcher bat can be a real good time. Does everyone remember when Fernando Valenzuela came to the plate? It was like the ballpark and the entire television audience stood still. Because you didn't know what was going to happen. Valenzuela had a real chance of possibly hitting a home run, and you would never forgive yourself if you missed it.

So that's actually the reason why I would be sad if the DH took over both leagues. It's not because of any dedication to double-switches or old-school 1940s baseball or anything like that. It's because there would be no pitchers batting on cards.

I still want the chance to see something unexpected and to get a crazy card of a guy like Stults or Nomo uncorking on a pitch that they have no chance to hit.

Major League Baseball is never going to be perfect. Ever. So why not enjoy some of the imperfection a little bit?

Think of all the great Upper Deck cards you would have missed otherwise.

AdamE said…
At one time wasn't there a blogger that collected pitchers batting cards?
April 13, 2011 at 5:32 AM

The Lost Collector said…
I'm pretty sure Colbey from Cardboard Collections still does.
April 13, 2011 at 9:18 AM

Kevin said…
Agreed. With the Orioles being an AL team, pitcher batting cards are a special treat. Since you mentioned Fernando, I believe the back of his 1993 Upper Deck card shows him batting in spring training. Dennis Martinez's 1982 Fleer card is an early example, but he's just posing with bat and helmet. Kind of odd, come to think of it.
April 13, 2011 at 9:48 AM

GCA said…
Batting pitcher cards are OK, but pitcher relic cards with bat pieces are pretty lame, I think. Unless that pitcher was known for his .300 average, why would I want a relic of what is most likely the weakest part of that guy's game? I'd rather have the jersey, or if you really want a piece of one of the tools that a pitcher uses, then put ball seam swatches in there. (Gaylord Perry's would be scuffed up :) )
April 13, 2011 at 10:10 AM

Justin McLeod said…
I don't actively collect them, but I have several. I enjoy them. It's a neat alternative to the usual middle of the wind-up, staring in for the sign, etc. pictures.
April 13, 2011 at 10:16 AM

Slangon said…
I also find cards showing pitchers batting amusing. What I really want to see though is a card showing a position player pitching. Now that would be worth seeing.

By the way, the 1973 Topps card of Jim Kaat shows him batting. Now there's a rarity. An American League pitcher batting. Of course that was also the year the DH was adopted.
April 13, 2011 at 1:54 PM

Anonymous said…
I love cards of Carlos Zambrano batting, because if worse ever came to worse, he's probably good enough to pull off switching to 1B or DH and hitting 25+ bombs a year with a considerably better batting average than Carlos Pena. Just give him a crash course in plate discipline and let nature do the rest. Or something.
April 15, 2011 at 2:29 AM