April 27, 2011
(Have you ever stood in line in the rain for the opening of a new Olive Garden? Neither have I. Yet, it happened where I live. I was dying to go up to each person and ask them why they were there. Here is to "thinking things through." This is Cardboard Appreciation. It's the 111th in a series): 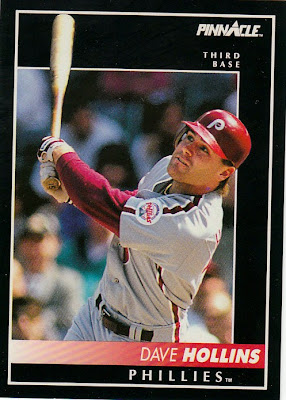 As a major league baseball fan, I am done "wishing."

Here is what I mean by that:

The Dodgers have this guy in their bullpen named Jonathan Broxton. He's a big guy from Georgia. He's an ox. How can you not like the fact that an ox plays for your team? We've got an ox in our bullpen. He's gigantic and throws close to 100 and can obliterate the hitter. He's ours and not yours.

But it doesn't work that way. I've known that for some time now. When I was a kid, I liked players for no reason at all. I'd attach my feelings to them and hoped they'd sense those feelings and do well on the ballfield. Usually the object of my affection was some scrappy infielder or a base stealer. Larry Bowa, Omar Moreno. Guys like that. There was no reason for me to like them. They didn't even play on my favorite team. But there was no logic to this equation. I just liked them because I liked them.

Then along came Dave Hollins. He was from Buffalo, N.Y., which was reason enough to like him. Not a lot of major leaguers came from Buffalo. He went to Orchard Park High School, which was a baseball power. I knew that from covering high school baseball in the area.

Hollins made in the majors. He played for the Phillies, one of the teams I liked. He played third base, one of my favorite positions. He was a power hitter. I liked that. Soon, he was a cornerstone of my fantasy baseball team. Hollins and Dante Bichette formed the middle of my order.

You know what happened with me and fantasy baseball. I stunk at it, I grew disillusioned, and I stopped playing. A small part of the reason was because I let my feelings -- no matter how inexplicable they were -- get in the way of running my team. I should have replaced Hollins. He would never have another season like his '92 and '93 seasons. I should have given him the ax. But I "wished" that he would do well instead.

So this is why I don't want to see Broxton in any closing situation anymore. I know he has the talent. But he doesn't appear to have the mentality for it. I may wish that his talent will overcome whatever mental issue he's having on the mound. But wishing has no place in baseball. Not if you hope to win. Dave Hollins taught me that.

Sorry, Jonathan. If I ran a fantasy team now and you were on it, you'd be done. No more wishing.

You hear that Dodgers? No more wishing. It doesn't win games.

Andy said…
There was recently a discussion over on the baseball-reference blog about use of terms like 'scrappy' which apparently are viewed as racist as they are more often applied to white players. Apparently there is an undercurrent of applying to white players terms like 'scrappy' and 'determined' which connote intelligence and ambition while terms like 'athletic' and 'skilled' tend to be applied to black players, connoting that their achievements are down to genetics and not intelligence or drive.

The readers got into it a bit, with some saying that this is pervasive racism in baseball and others saying that they use the terms without consideration of race. Those who favor the racism argument claim that those who claim no racism still tend to use the words in a race-shifted way.

Anyway, I was curious about your thoughts on this since you're a professional writer and probably think about things like this.
April 27, 2011 at 5:39 AM

night owl said…
I suppose if I used "scrappy" for only white athletes, it can be perceived as racist, even if there is no intent.

I happen to think African-American players like Juan Pierre and Dave Roberts are/were "scrappy," and I've probably referred to them as such, so I don't think it's a racist term.

Andy said…
On our blog, a fairly famous study was referenced that found that when media refer to professional athletes, terms that imply some extra effort or intelligence, such as 'scrappy', 'smart', etc, were applied much more often to white players than the players of color.

So I would think that there's a natural tendency to assume that a black athlete grew up in a lower economic level with perhaps less access to good education, while a white player had the opposite. I'm not saying this is a GOOD assumption, or one that we shouldn't fight against, but I can at least understand how and why it happens.

And it's true that if you look at, say, black players in the NBA, there are many who grew up in the inner city with little access to good schools but who played a ton of basketball from an early age and developed an impressive set of skills related to the sport. These guys are a lot more common than say someone like Grant Hill, who while black grew up in a strong economic situation with a great education.

My point is just that if the racist tendency in using those terms exists, it's not necessarily because there's racial judgment going on, as much as perhaps simply applying the averages too stringently. I'm not saying this laziness is OK--it's just also not exactly like being a Nazi.

deal said…
are all scrappy players middle infielders or 4th outfielders. Are any pitchers considered scrappy?
April 27, 2011 at 12:57 PM

night owl said…
It seems that part of the definition of a stereotypical "scrappy" player is that they are short, or relatively so. Pitchers aren't short, so maybe that's why they are never "scrappy."

I'm wondering if the attachment of "scrappy" to white athletes by some is because the fan base for major league baseball in the U.S. is overwhelmingly white. Therefore they might identify with the white player more than the African-American player. They don't know the African-American experience. That in itself is probably a breeding ground for racist views.
April 27, 2011 at 2:02 PM

LoCoDe said…
It's a huge part of racist history that people of color are considered lazy. Hank Aaron's book talks about it a lot.