April 25, 2011
I'm starting to feel that I have a lot of balls in the air on this blog and that I need to settle things down a bit before I start getting irritable. Or more irritable than usual.

I'm not going to flake or anything, but I have noticed a slight sense of trepidation in the past week when approaching the computer to write. That's usually a warning sign to ease off the gas a little before night owl crashes through the barricade.

So I'm going to do a couple of things here. First, I'm going to tie up a few loose ends in this post so I can focus on what I need to do. Secondly, I'm going to ask that if you read about me starting any new features, please find a way to shut down my blog.

All right, a few items before I fall asleep sitting up.

I'll break them down in the form of questions asked by a really annoying person as that might keep me awake: 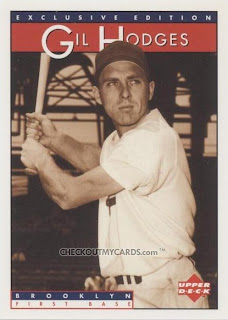 OK, I made a crack in this post that I would drive as far as it takes to visit my first Sonic Drive-In if they were alert enough to issue cards. It turns out that I should have made that drive in 1995 because that's when Sonic did issue cards. It issued a 20-card set put out by Upper Deck in conjunction with Coke and it issued a 12-card set sponsored by Pepsi. 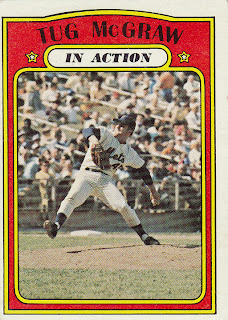 II. DID YOU ALREADY FORGET ABOUT THOSE ALL-NICKNAME TEAMS?

There hasn't been much time to do anything with this, but I'll be on vacation in eight days. I hope to make some progress then. If you have some favorite baseball player nicknames, leave them on this post. I've collected a list, but I need to do more research and then start breaking names down into decades. 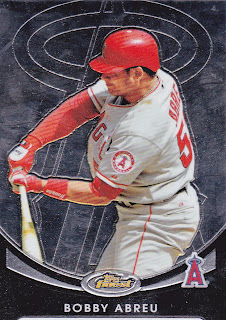 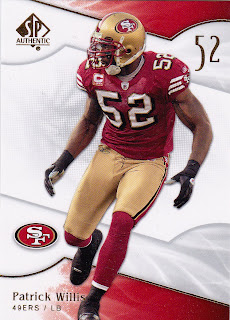 III. HEY! WHY ARE YOU SHOWING THESE RANDOM CARDS?

A little while ago, a fellow blogger sent these cards to me only because he couldn't remember who the Angels fan was who also collected Patrick Willis cards. He thought I might know. But I don't. If you're the guy who collects that stuff, let me know and I'll send them off to you. It's just a handful of items. Taking up space. Which is not mine to take up. Or so I've been told. 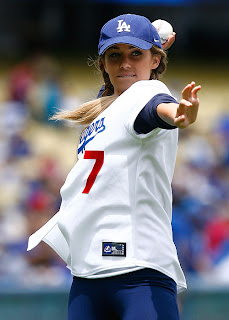 IV. SHE'S PURTY. IS THAT YOUR NEW DODGER GIRL?

There are only a few hours to vote in Waxaholic's poll to select the new Dodger Girl on my sidebar. Act now! The poll leader is who I want to win, the lovely Lauren Conrad. But even if she doesn't win, it doesn't matter. I've decided I will alternate Dodger Girl photos on the sidebar. That way I get to keep Alyssa Milano there, as she should be, while alternating with more "contemporary" Dodger fans. 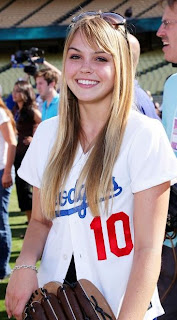 Don't expect me to alternate the photos every week. It'll be only when I feel like it, because something like this should be addressed in as shallow a manner as possible. 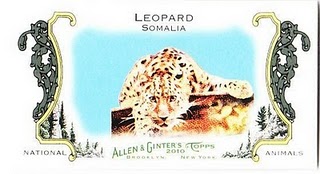 V. ARE YOU STILL WHORING YOURSELF OUT FOR DODGER MINIS?

Wellll ... I wouldn't put it that way, but yes. I was able to make some progress with my last post. But I still have a few more 2010 A&G Dodger mini needs. So if you have some off my want list and like what I have available, let me know (crossed out cards are currently in a transaction). I'm not into the variation backs, but I will take black borders.


VI. DID YOU SAY SOMETHING ABOUT A CONTEST?

No, I didn't, and how inappropriate of you to ask. But I do have plans for one. It's not going to show up immediately. I'd give it another month. There are a couple of blog milestones in the distance, so I'll tie the contest in with them. I actually have an idea for the contest (and, yes, you will have to WORK for your prize). But I haven't even considered the prizes yet.

VII. AREN'T YOU GOING TO SHOW US ANY NEW CARDS?

I'll keep it short. Here's an autographed card in all its horrible stickerness of a Dodger rookie who didn't do much: 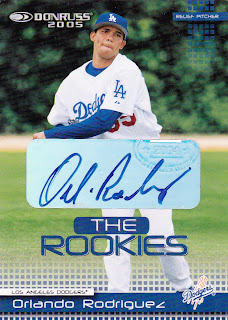 Orlando Rodriguez spent seven years in the minors and pitched in Mexico last year. But all I had to do was send a handful of unwanted Astros to Cam and this masterpiece was mine!

Bleah, what an ugly card.

VIII. WHY DID YOU NUMBER ALL YOUR QUESTIONS WITH ROMAN NUMERALS? ARE YOU UNAMERICAN OR SOMETHING?

Posts may appear at a slower rate this week, or I may get a second wind (as I often do), and you won't notice anything different.

Play at the Plate said…
A couple of things.

I. That is one of the ugliest sticker autograph cards in the history of mankind.

II. I'm going to get my Ginter minis and see if I have any you need.

III. There are three reasons I like your long posts. First, the writing is top notch. Second AND third, have something to do with that picture of Alyssa in the blue tank top. I get to see it every time I get to the bottom of one of your longer posts. If you take that picture down, I will lay on the floor and throw a tantrum and hold my breath until you put it back up. I'm not saying you can't put another picture up, but....well it's your blog.

IV. I'm not even THAT big a fan of Alyssa's, but she does look good in Dodger blue.

Mark Aubrey said…
VIII. WHY DID YOU NUMBER ALL YOUR QUESTIONS WITH ROMAN NUMERALS? ARE YOU UNAMERICAN OR SOMETHING?