Kick her to the curb? 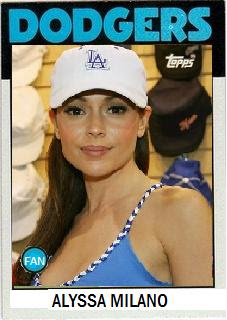 All right, this is serious business here.

As you might have noticed, I have a little bit of a thing for Alyssa Milano. Just a little bit, because that's all that my wife will allow.

I've mentioned her periodically in posts, and her lovely visage has sat on my sidebar for about two years now.

And that's what I'm afraid I must discuss.

The picture of Alyssa links to her Major League Baseball blog. As you know she's a big baseball fan and Dodger fan. And she used to blog a whole bunch. Some of the topics were kind of interesting. It was nice to read about someone in the entertainment field who was such a big baseball fan, a fan of my team.

But she hasn't blogged in a long time. A long, long time.

The most recent blog was about Twitter, which is appropriate because she's on the thing more than any other human being alive. I eventually had to unfollow her because she was driving me a bit wacky with not only some of her dippity-doo tweets but just the sheer NUMBER. It says she's made more than 15,000 tweets, which has to be a serious, serious error in underestimating. She puts out 15,000 in a couple of slow weeks.

Alyssa periodically tweets about the Dodgers, but it's not very often and it's only squeezed in between the following:

But that is my option if I want to link to something Alyssa is writing, because she sure ain't writing her blog anymore.

The other option is (*gulp*) remove her picture.

I can't believe I just wrote that.

So I'm turning to you. What should I do?

OK some of the above are serious options and some are not. But really, I need to come to some sort of decision. I don't want stuff on the sidebar to be pointless, and I feel like there's no point to having a picture of her there anymore.

I know. That can't be possible.

What am I saying?

Alyssa, forgive me. Come back to your blog. Come back!

madding said…
I vote that you replace her entirely with her Charmed castmate Rose McGowan.
April 18, 2011 at 3:27 AM

Dodgerbobble said…
Replace her with a younger hotter Dodger fan like Audrina Patridge. She might not know baseball like Alyssa, but she's much better looking.
April 18, 2011 at 3:45 AM

Paul Hadsall said…
Keep the photo linked to the dead blog or drop it from your sidebar... Ms. Milano does not need any help gaining Twitter followers.
April 18, 2011 at 7:24 AM

Anonymous said…
Dude, just the fact that she was there in the first place had me shaking my head. Yeah, she's a Dodgers fan, but she throws herself at anyone with a jersey on! You can do better.
April 18, 2011 at 7:40 AM

Mariner1 said…
I think you should leave the picture up and have it link to a rotation of pics of Alyssa. Some regular pics and some pics in Dodger outfits. It could even link to her line of clothes for MLB and the NFL. I still think she is a little hottie.
April 18, 2011 at 7:56 AM

Feather Chucker said…
I feel your pain. I've been in love with Alyssa since "Who's the Boss?" I guess I'd leave her pic up but remove the hyperlink to her blog. At least until Scarlett Johansson starts writing one.
April 18, 2011 at 10:23 AM

GCA said…
You could make a little gallery right there of notable Dodger fans and include all of the above. (The occasional dude to justify them to the wife...)
April 18, 2011 at 1:22 PM

Anonymous said…
Leave the pic. Who cares about the link?