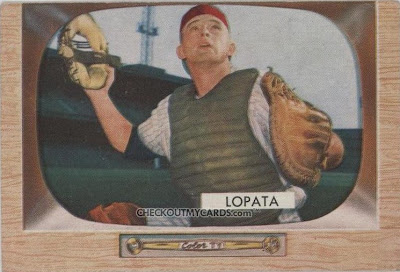 Here is another set that I believe has one of the more memorable card backs in the countdown, despite it's rather primitive makeup. It may not be fancy or packed with information, but it stands out regardless.

When I think of the card backs of the old Bowman cards, the 1955 card back is what my mind processes first. I'm not sure why, but those card backs appeal to me, almost as much as Bowman's television fronts. 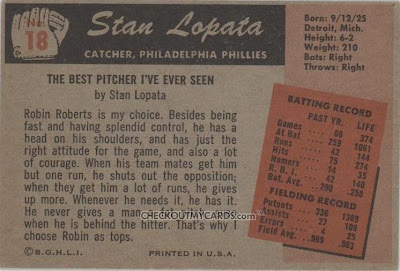 The backs feature the usual information. Vital stats. Career stats and stats from the last year. I like the color scheme as it seems to continue the theme of the front of the cards -- something that didn't become common in card collecting until the 1990s.

But for me, the best part of the backs are the personal stories featured on many of the '55 Bowman cards. This particular card has a recounting of the best pitcher Stan Lopata ever saw. 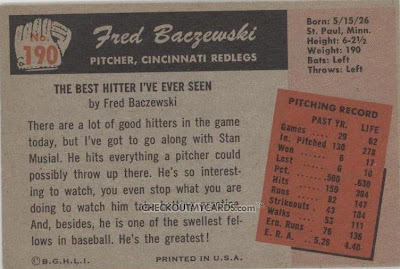 This card reveals the best hitter that Fred Baczewski ever saw.

There were other stories, too: 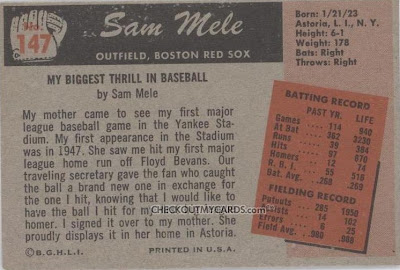 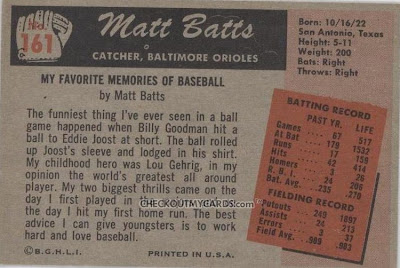 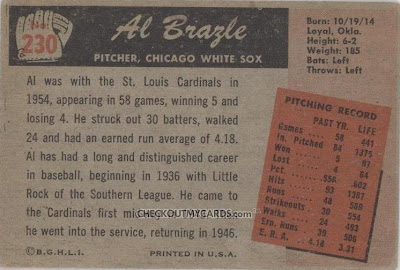 Sometimes the back featured a simple bio write-up of a player's career. That was probably disappointing in comparison to the other card back options. But the cool part of all this is that the set featured several different backs. It wasn't the same information for each player. That's great. I'd love it if a card set did that again. Each card would be a surprise when you turned it over.

As you can see by my snarfing up images from Check Out My Cards, I don't have many of this cards. In fact I have one. So I couldn't tell you the best of the set. But someday ...

Maybe I'll track down one of the umpire cards first.

Chris Stufflestreet said…
1955 Bowman is awesome from a back standpoint. The thing I really like are the "personalized" stories. Many of the players indicated Stan Musial of Ted Williams as their "best hitter" while several others named Bob Feller "best pitcher."

Card #4 features Eddie Waitkus, whose "Gretaest Thrill" starts off -- oddly enough -- with the words "In 1949 I was shot by a deranged girl."

I wrote an article about 1955 Bowman cards that was published in SMR. It is available as a PDF file on my site if anybody wishes to read it:

Bo said…
Those backs are great! I especially liked Mele's. If you notice, it is actually and error card - Floyd Bevens's name is misspelled.