September 14, 2010
(Today is National Cream-Filled Donut Day. I don't make this stuff up in order to justify a junk-food lifestyle. I think that's advertisers' job. But if I should cross paths with a donut today, don't think I won't honor the day. It would be rude to do otherwise. Time for Cardboard Appreciation. This is the 81st in a series): 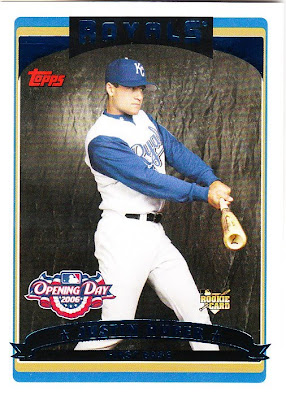 Cards like this fascinate me and probably only me. But that hasn't stopped me from writing about them before.

This is a card of Justin Huber, issued in the 2006 Topps Opening Day set. It is his so-called "rookie card."

The reason that this is so, I am assuming, is because Topps famously pulled the card of Royals prospect Alex Gordon from the base set. And I am also assuming that Topps at one point had planned to put Alex Gordon in the Opening Day set. But since Gordon was a no-go in the base set, that meant it couldn't use him in Opening Day either.

If my assumptions are correct (and they rarely are), then Huber was a last-minute replacement. He was filler.

If I had not attempted to collect the entire Opening Day set that year -- who knows why -- then I might never have come across Huber.

He seems to be an interesting guy. He is from Australia. He once was a big-time catching prospect in the Mets organization, but was forced to find a new position because of knee surgery. He was once traded for Jose Bautista (the guy currently leading the A.L. in home runs).  He's played in the majors for the Royals, Padres and Twins. He's now playing in Japan for the Hiroshima Carp.

I never would have known any of that if Huber wasn't a seat-filler for Topps. If that was what he was. But I'm going to say that because of Topps' screw-up, Huber got a card in the Opening Day set.

To me, that's kind of cool.

Anonymous said…
If I recall, Huber was the player that Rob and Rany (when they did Rob & Rany on the Royals) basically quit the Royals over. He was tearing the league up in AA, so they called him up and then used him sparingly as a pinch hitter and fill in.
September 14, 2010 at 10:03 AM