Tiffany is not who I thought she was 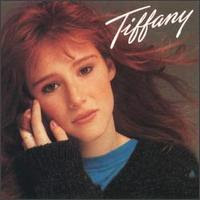 This post was inspired by the Spastik Mooss. So you can blame (or credit) him.

You all remember the pop singer Tiffany, don't you? When she hit it big, I was in college. I didn't pay a lot of attention to that kind of music. The college alt-rock scene had boomed in the late '80s and that's what I listened to and liked.

But you couldn't avoid "I Think We're Alone Now" at the time or the basics of Tiffany's story. She was 16. She sang in shopping malls. She ripped off a song from the '60s. OK, it was a teeny-bopper homage. Whatever.

She seemed cute enough, but that's all I knew.

Later it came out that she had family issues. There were career control problems and later an inevitable Playboy spread, and suddenly the perky teenager who sang before screaming kiddies in the mall was gone. Tiffany was not who I thought she was. Even though I hadn't given her much thought at all.

I'm sure most collectors are aware of the Tiffany sets that Topps produced right around the time teenager Tiffany was belting out Tommy James and the Shondells. They were classier, glossier versions of the regular Topps base and traded sets.

I believe the first ones came out in 1984 and they appeared just about every year through 1991.

I never saw these cards when I was collecting. But, like Tiffany the singer, I was aware of them. I saw them in mail-order catalogs. But I never got a good idea of what the cards were like -- probably because I wasn't paying much attention. I thought they were like Tiffany glass or jewelry. Cards made out of glass, basically. "Man," I thought. "Those have got to be expensive."

So, I dismissed the cards because there was no way I could afford Cards Made Out Of Glass and rarely thought of them again.

I am back collecting current cards for the first time since 1994. It is my goal to get the entire 2006 set. Stores, mostly Wal-Mart, are selling 2006 cards in rack packs. In each rack pack are three "vintage" cards. The vast majority of these cards are from 1980s Topps. But it's enough to get me back in the game. Buying current cards with a chance to fill some of my collection holes from the '80s is a fantastic proposition. I buy more cards than I have in more than 15 years.

But by the time Series 2 of Topps came out, some of the vintage cards were different. There were more '90s cards in the rack packs. A lot of the '90s cards I pulled were this: 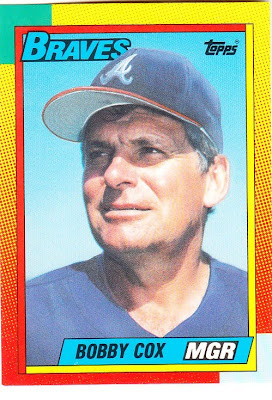 I wasn't crazy about these cards. I didn't like the design of the 1990 set (who did?), and getting more of these cards -- even if it was the Traded set -- didn't appeal to me.

The backs looked strange to me. 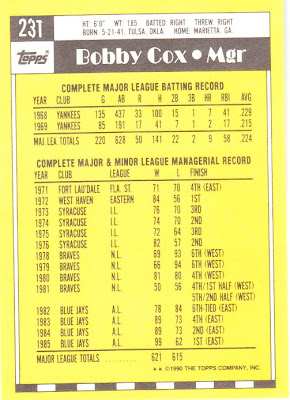 Unlike the 1990 base set, the cards were printed on white cardboard stock. And when I looked at the front of the cards again, I realized that they were glossier than the base cards.

I figured that they printed the 1990 Traded set on white cardboard instead of gray, possibly because they ran out of gray or something. (I barely collected in 1990 so I never saw any of these cards originally).

Anyway, I didn't like it. I thought it was cheap. It reminded me of the team cards that I sent away for as a child in the mid-1970s that came back on a flimsy white sheet instead of the great, sturdy gray cardboard that I knew.

Armed with my childhood bias, I thought this way for almost four years. I thought 1990 Topps Traded (by the way, one of the worst traded sets ever) was printed on white cardboard stock and that it was inferior.

Little did I know.

In the last year or so, I picked up some other 1990 Topps Traded cards. I'm not sure where. At a garage sale or the dollar store or somewhere.

I noticed they were different from the ones in the rack packs back in 2006. 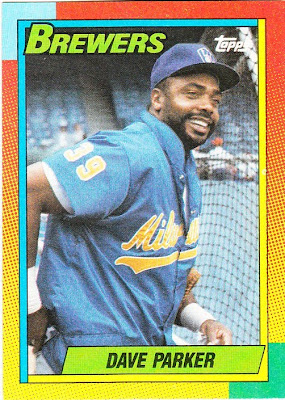 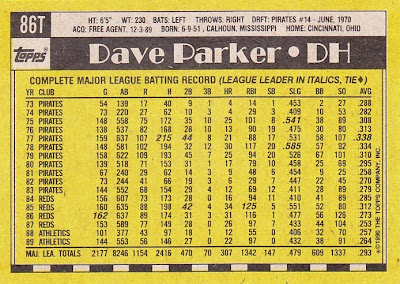 The cards weren't glossy like those other cards. And the backs were gray.

Hmmm, I thought. Did Topps print two different types of Traded cards? But I still thought the white cardboard stock cards were the inferior ones.

Then, recently, when I read Spastik Mooss' post, it dawned on me:

The white stock cards are the TIFFANY CARDS!

And they're not made out of glass!

But you knew that already.

The funny thing is that in the last few years I had become aware of exactly what Tiffany cards were and had a few from 1987. But I never made the connection between those '87 ones and the 1990 Traded until I read the Mooss' post. 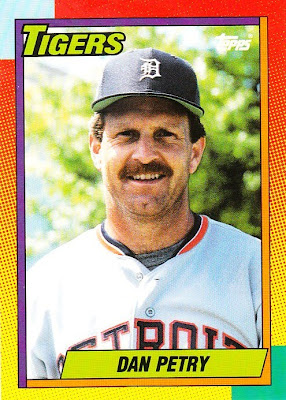 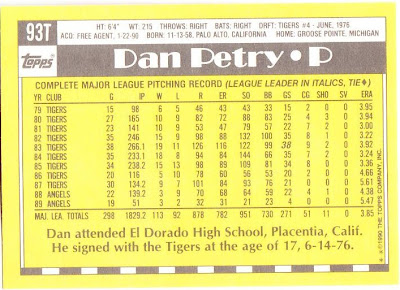 And now my 1990 Traded Tiffany cards are separate from the other Traded cards.

I apologize if you are now running to look at the backs of your 1990 Traded cards.

I also apologize if you are now humming a Tiffany song.

If you are doing both at the same time, I REALLY apologize. Truly.

At least I didn't link to anything.

madding said…
Just to confuse you even more, the 1990 Topps Traded factory sets (yes, I actually bought one) were printed on white cardstock, like most of the Traded sets issued in the '80s. Only the cards issued in packs had the familiar grey backs. Of course, they didn't have the glossy card fronts.

I think someone must have busted a ton of 1990 Tiffany sets (regular and traded) because I also got a bunch of them in an oddball lot from eBay recently, but I don't have anything from any other year.
September 16, 2010 at 9:26 PM

steelehere said…
Night Owl,
I think I might be throwing you a curve on this one so bear with me.

Does the front of your 1990 Topps Tiffany Card have a noticable glossy stock or does it have the same finish as the cards from the Topps Traded sets the card out in the 1980's?

I worked in a card store around this time and if I remember correctly, Topps released their traded set in both wax pack and factory set form for the years 1990and 1991.

Thus, if you take the Tiffany Sets into consideration, you actually have three different versions of standard-sized Topps cards that year. Note: There was a fourth in 1991 in the micro sets.
September 16, 2010 at 9:32 PM

Anonymous said…
I don't think I've ever seen the gray cardstock traded cards that you speak of. I'm familiar with the white cardstock.

The only Tiffany card I have is from 1987, I believe, that I received in a trade a while back. It's neat to finally have one.

Play at the Plate said…
Ok, I've got to go back and look at some of my cards since I've been sorting my Rangers. I know I have some of those glossy ones.

I saw the Tiffany issue.

Why do I always feel like buying a white Dodgers cap and a little blue tank top after I've been to your blog? Must be some sort of subliminal advertising.
September 17, 2010 at 1:10 AM

Martyn said…
Yes, If you watch "How I met your Mother" Robyn is based on Tifanny.

SpastikMooss said…
Haha...great post. I'm kind of glad that someone else didn't immediately recognize all the Tiffany parallels either.
September 17, 2010 at 10:44 AM