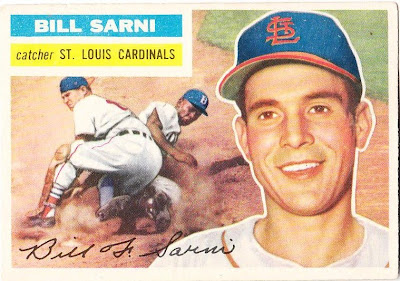 If you do a daily tour of the card blogs like I do, then you know this card. It was used as the header at Play at the Plate for a little while.

Play at the Plate is featuring a different card in his header these days -- a much better card in my estimation -- because Brian isn't a fraidy cat about changing his blog header more than once every two years. I, on the other hand, will probably have the same header until everyone pictured in my header is dead, I'm dead, blogging is dead, card collecting is dead, there is no cardboard, there are no trees, and the world is dominated by robot zombies. The only thing that will have survived from this current world are 87 copies of a 2010 Topps card of Shin-Soo Choo (because we all know that 2010 Topps isn't cardboard).

Anyway, enough of the future. The past is a much happier place.

But the extra special part of the play at the plate depicted in the action shot on the card is that it appears to be Jackie Robinson sliding into home plate.

I have had this card since I was a teenager, and since I am a Dodger fan, I have told myself that the picture does indeed feature Robinson and Robinson was absolutely safe on this play. I have believed this for the last 25-30 years.

But I've never had any proof.

The thing about the action pictures on the 1956 cards is I never knew if they were drawn from actual plays or if the artist just made up the play and selected whatever secondary figure he wanted to join the main subject in the photo. "I know! I'll put Mickey Mantle in the shot with this scrub that nobody ever heard of!"

But then I thought, they had to be drawn from actual photographs. It is a much more realistic way of creating the pictures than an artist making things up off the top of his head. (Some of the action shots on '56 Topps are actual photographs which must have been quite cool at the time).

That made me think that the person sliding into home plate was indeed Jackie Robinson and that what was being depicted actually happened.

So I started sleuthing.

I began with 1955, the year before the Sarni card hit the streets. Researching was a little tedious (if you can consider 15 minutes tedious). Back then there were fewer teams, meaning more games between two opponents. The Dodgers and Cardinals played each other 22 times in 1955.

Also, both Robinson and Sarni were regular starters in 1955. So just about every game featured both players.

I went through May and June (they played a five-game series in June!). I went through July and most of August. Nothing. By this time, both Robinson and Sarni were getting less playing time. Robinson was getting old and Sarni must not have hit as Nelson Burbrink was getting most of the starts behind the plate.

I think I have my play.

It's a Monday day game at Ebbets Field. Robinson starts at third base. Sarni starts at catcher. The Dodgers lead the Cardinals 2-1 going into the bottom of the sixth inning.

Jackie Robinson comes to the plate and bunts. Cardinals first baseman Wally Moon fields the ball and throws to Sarni at home, who tags out Campanella for the second out. Robinson reaches first on the fielder's choice. Furillo advances to second.

Robinson is then picked off first base on a throw by Sarni, but apparently the throw is errant because Sarni gets an error and Robinson reaches second and Furrillo third. Gil Hodges then walks. Sandy Amoros follows with a bases-loaded walk, scoring Furillo and sending Robinson to third.

The Cardinals replace their pitcher and then Robinson does what he did best. He steals home.

I think that is the play that is shown on the card.

The steal of home was actually part of a triple-steal on the part of Robinson, Hodges and Amoros, or perhaps a delayed steal by Amoros. Hodges stole third on the Robinson steal, and Amoros stole second. Apparently, after Robinson stole home, Sarni threw to second to catch Amoros. Hodges headed home and the shortstop threw out Hodges at the plate.

That seems so crazy, I don't even know if that's actually how it happened. But I do believe the steal of home is the play on the card.

The Dodgers scored three runs that inning and ended up winning the game 10-4. 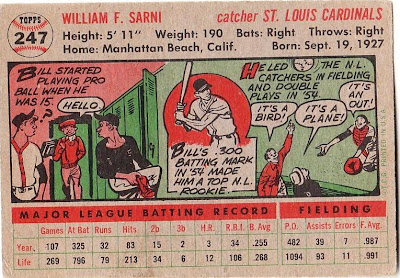 As for Sarni, you can see by the back of the card that he began his pro career at age 15. He apparently carried his books into the locker room.

Collective Troll said…
You are one heck of a detective... I have always loved that card. It made a great play at the plate header, but i always felt bad for sarni as the card shows the opposing team scoring...
congrats on hitting 200 followers, too...
September 22, 2010 at 1:00 AM

Play at the Plate said…
Very nice sleuthing. It's great that you can identify the game and play where that play occured.

I wasn't sure anyone noticed the header changes (other than the Troll who comments on it from time to time). I've been trying to trade for that Sarni and the Carl Furillo that's up now. I've got a '56 post in me if I can get it on "paper".
September 22, 2010 at 2:49 AM

night owl said…
Unfortunately, it turns out that's not Jackie Robinson in the picture, but Jim Gilliam.
May 2, 2016 at 12:41 AM