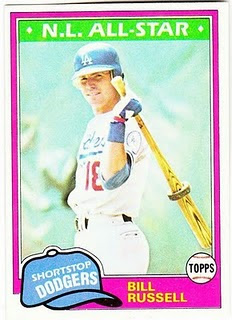 I've wanted to do this for awhile, so I'm going to do it here on the blog for the sake of officialness.

As you know, I'm fixated with color. Whether it's attributing a certain color with a letter of the alphabet or bitching about what color Topps chose for a particular team in a particular set, color is something that I find very interesting.

This here exercise has to do with the colors that Topps attached to teams in given years for their base set. I am going to create a series of posts and each post will list what colors Topps used for that particular team in a given set. Each post will be dedicated to a different team.

I'm doing this only for Topps because it's usually Topps that changes the colors on its cards depending on the team. The other companies have done a little of this, but generally Upper Deck, Donruss, etc., pick a certain color theme and it stays with each card no matter which team is featured.

Topps has done this, too. Sets from the 1950s and early 1960s, as well as others scattered through the years (1970, 1975, 1999, etc.), did not base their color schemes on which team was featured. So I won't consider those sets when determining which colors were used with which team.

For each team, I'll list the color scheme used for each year, and then I'll determine which color was used the most often and how that matches up with that team's actual team colors.

It does to me, and that's all that matters.

OK, the first Topps set that used specific colors dependent on the team was the 1964 set. On we go with the Dodgers:

A couple of notes before the final verdict:

1. As much as I whine about pink being used with the Dodgers, it's been used only six times. Just about all of those times, though, were when I was collecting as a youngster.
2. Topps did a much better job matching the colors they used with the team colors in the last few years. Its best year of this may have been 2005. Spot on.
3. Gray is very in vogue now with Topps. It's not just with the Dodgers. Topps uses it with a lot of teams. I know Topps wants me to call it "silver." But I won't. it's gray. (Or grey for a misguided few).
4. I didn't count white and black as colors. I'll have to do that with teams that use white and black as their team colors (White Sox, especially). But otherwise, I won't use them in the tally.

All right, the verdict: 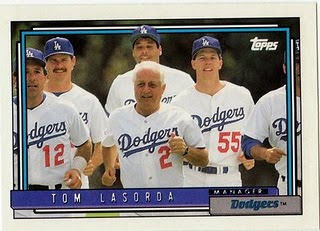 I will be placing this series on the sidebar, eventually.

EDIT: I revised the list and the tally to no longer include 1997 as Topps did not base its colors on featured teams. Per Kevin's note in the comments.

Nachos Grande said…
Interesting - it's only too bad the Rays and D-backs don't have a long history...Topps would have been all over the color palette with those two teams I'm guessing!
September 22, 2010 at 11:57 PM

Anonymous said…
They should try to follow the team colors if they are doing the same colors for each team.

I'm a big font guy - and a huge UniWatch blog fan and a fan of stirrups. Pajama pants should be BANNED! Show us your stirrups!

Kevin said…
Good idea! In general, Topps has been more consistent with their color choices for my Orioles than your Dodgers, I see. One suggestion: if I'm correct, the 1997 set featured only two border color choices - green for National League teams and red for American League teams. I'm not sure that I'd count that year in the color tally. Ultimately, that's your call.
September 23, 2010 at 8:13 AM

Johngy said…
I feel that way about signatures. Not just getting great signatures, but studying the various signatures of the various players (good and bad) I have collected. I find the actual signatures interesting, even of people I know on greeting cards and the like.
Great work on the colors.
September 23, 2010 at 2:54 PM