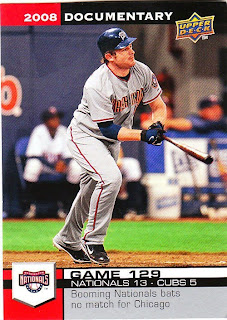 I feel a little guilty putting this set in the countdown, knowing what we know about the failings of Upper Deck Documentary.

But the majority of those problem have to do with the front of the card. Namely, the photo of the player, or the blurb on the bottom, or both, does not properly reflect the game that the card is featuring.

For instance, this is a photo of Austin Kearns of the Nationals (I think. Documentary won't tell us). The blurb mentions how the Nationals' bats were too much for the Cubs. 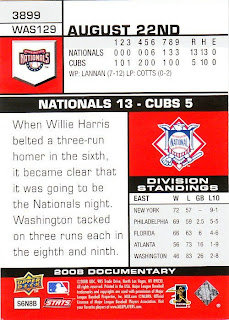 On the back you see no mention of Kearns at all. Just something about Willie Harris.

But let's not let the card front bring down the card back.

What I like about the back of the card is that it's probably the closest I've seen to a set featuring every team's games in boxscore-like form. Who doesn't love boxscores? They are one of the most awesome things on this planet. 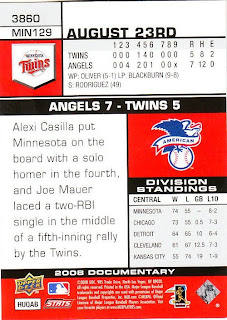 I love it. One of these days there needs to be a set that features full boxscores on the back. I don't know how you devise that or if  there's ever been that kind of set already, but if not, it needs to happen. Get our greatest minds on this project now. If you're trying to figure out how to clone an emu or whatever, stop what you're doing and figure out how to get a full boxscore on the back of a card. 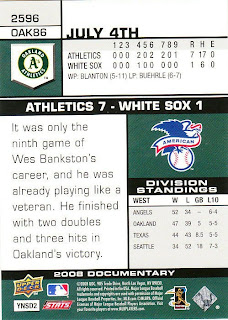 For obvious reasons, this set wasn't popular with collectors, and even though I would love to have the whole 162-game set for the Dodgers (yes, I know the card fronts are yawn-inducing), I seriously doubt that I'll get there.

But if I do, I think I'll display all of the cards with the backs facing front, to reflect the entire Dodgers season. That would be so cool.

I don't have very many of these cards, so I don't feel comfortable putting a "best one" out there, knowing that there is probably some great Dodger game reflected on a card that I don't have yet. So I'll hold off on that for now.

Anonymous said…
Hey, I need that Twins game #129! I can swap some Dodgers Documentary for that, if you're interested?

The Documentary set is a guilty pleasure for me, regardless of the complete ignorance of the front of the cards.
September 10, 2010 at 9:03 PM

AdamE said…
It is a guilty pleasure for me too. I like getting them in trades. I always contemplate buying them in pack form because I think there are 162 Red Sox I can get that can't be too hard. But than reality hits and I realize that EVERY team has 162 cards that I might get. Actually I am less likely to get a Red Sox out of Documentary than anything else because there is an even amount of each team but in a normal set of cards there are usually more Red Sox than most other teams.

Anonymous said…
Not quite, Adam -- I collect the visiting team games, too, so that's TWICE the odds. Also, if you pick the packs up for $1 at Dollar Tree, and knowing that trading them to other team collectors when you don't get what you want (and chances are they don't have the card(s)), well, that's win-win to me.
September 10, 2010 at 9:38 PM

TheBrooklynMet said…
Hey, if you have some of these you'd be willing to trade there are a couple on my want list. Let me know if you have any! http://clearcutcards.blogspot.com/p/want-list.html
September 10, 2010 at 11:48 PM

deal said…
yep it is definitely the fronts that are the problem. I would consider collecting for the backs, but it would still be a low priority.
September 11, 2010 at 12:44 AM

I have very few of these cards that aren't Dodgers, so all I can guarantee right now is that I'll send the Mauer card to mmmrhubarb. I'll have to look at the other 7 cards I have and see if it's anything TheBrooklynMet wants.
September 11, 2010 at 2:25 AM

gcrl said…
The photo was taken in the metrodome. Just another disconnect for documentary.
September 11, 2010 at 5:01 PM