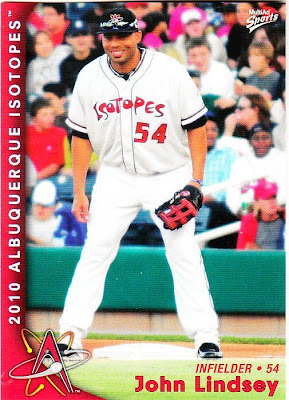 As a people, we suck at patience.

And, if it's possible, we're getting suckier.

People can't wait for anything. Email "takes too long." The guy driving 80 ahead of you is "too slow." How many times have you cursed your phone because you're not online in 10 seconds? I know I've done it more than once.

Fortunately, there is John Lindsey.

Lindsey is a baseball player in the Dodgers organization. He will report to the team today after getting called up to the major leagues on Sunday.

Lindsey is 33 years old. He has played in the minor leagues for 16 YEARS. And until today, he had never been an active member of a major league baseball team.

How many players do you think he has seen quit in that time because they didn't have enough patience, either with themselves or with the organization or with baseball in general?

Lindsey did well in the minors for two years, then returned to the Marlins in 2009 before coming back to the Dodgers.

Through all the doubts, and the "what am I still doing here" and the "these idiots have their heads up their ass," Lindsey plugged away.

He is the oldest Dodger to make his major league debut since 1954 (excluding Takashi Saito's first appearance in 2006).

September is going to be a tough time for the Dodgers. They're not going anywhere and those games aren't any fun. But for Lindsey, I can only imagine what's going through his head:

Unknown said…
I wish him the best! He is a really nice guy. Always has a smile on his face. I even catch myself not patient enough. I hope he has a story book ending.
September 6, 2010 at 1:53 AM

Congratulations to John Lindsey. I just hope Joe Torre plays him.
September 6, 2010 at 2:10 AM

--David said…
Excellent post! I hope his MLB career treats him well for all his patience. Like only a handful of players these day, I think he "would have played for nothing." I wish him the best!
September 6, 2010 at 8:59 AM

Steve78 said…
The stories of guys like this are are the stories of baseball. Awesome stuff.
September 6, 2010 at 5:22 PM

AlbuqwirkE said…
John Lindsey is easily the nicest player I have ever met... a true inspiration.
September 10, 2010 at 3:14 AM