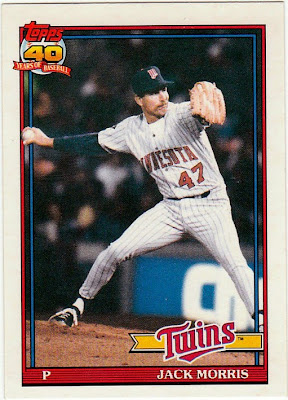 OK, with this card, I have now officially displayed 100 night cards in the Awesome Night Card format on this blog.

That is quite the occasion for a night card addict like me.

To mark the occasion, I have purchased a binder to house my night cards.

Yes, I know what you're thinking: "you mean, you don't have your night cards in their own binder already?"

No, I don't. Although I collect them, I've never separated them. They are merely included in my 1991 Topps binder, or my 1984 Topps binder, or my many Dodger binders, or wherever they land in my arbitrary filing system. There has never been an O-fish-ee-al Night Card Binder, until now.

This is a big step, because not only have I recognized another subset of my card collecting hobby in binder-and-page form, but I now must start collecting duplicates of a lot of these cards. In fact, that has been the one thing that has kept me from getting a night card binder (that and the fact that I hate shopping for binders). Dedicating myself to yet another branch of collecting -- especially when it involves acquiring cards that I already have -- isn't exactly appealing. But I am determined to fill this binder, so that is what I will do.

Also to mark the occasion, I'm going to do something else here on this blog, and that's why the Jack Morris 1991 Topps Traded card is featured here.

It is one of my favorite night cards because I believe it is the only night card in the entire 1991 set -- base set or traded set. It's also a great card as it's the first of Morris as a Twin, and we all know what he did as a Twin in 1991. He pitched one of the greatest World Series games I've ever seen. The card evokes those '91 memories.

But not yet. We'll start it next week.

Like the "Cardboard Appreciation, the review" series of posts, I will group a few night cards at a time and ask you to vote on them. I'll do that for as long as it takes to get through 100 and then we'll whittle them down until there is only one. But unlike the Cardboard Appreciation vote-off, this is not a stall tactic in order to find more night cards. I have plenty of night cards in reserve.

Instead, the card that is voted the best will get position No. 1 in my night card binder. I'll probably reserve the second spot for the runner-up, spot three for the third-place finisher, etc.

So, you get to choose the order of the cards in my night card binder.

Stop rolling you eyes. Somebody will think it's interesting.

If not, you'll all just have to suffer, because I think it's interesting.

And you're not going to see another new night card on this here blog until we figure out the best one. So have some fun and play along.

Otherwise, it's going to be a long night.

Nachos Grande said…
I think it's a great idea. Though perhaps you want a rule stating no Yankees can make the top 9 - I hate flipping open one of my binders and being greeted by the smiling overpaid mug of some Yank...
September 12, 2010 at 10:20 AM

Captain Canuck said…
I want you to rip up that card into 666 pieces, scatter them throughout a cornfield, and then set the field on fire.