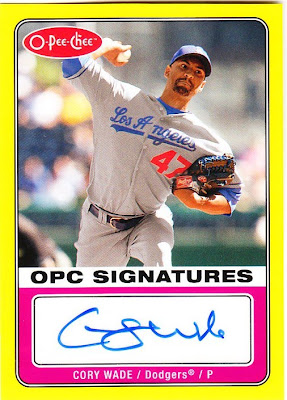 Last month, when half the card blogging world was making a pilgrimage to the National sports card show in Baltimore, I not-so-silently stewed in my inability to attend. I even kind of yelled about it a little.

But it was all in good fun. Even if I didn't have to work while the National was going on, I probably wouldn't have made it anyway because August is a super-broke month for me. They really need to move the National to a different month.

So, making the National was pure fantasy for me.

Fortunately, getting cards from the National is not.

I recently received several selections from Baltimore-based bloggers (say that sentence 10 times fast). Some of those cards were from the National. At least one card was picked up specifically for me. That, my friends, is the action of a gentleman and a scholar. 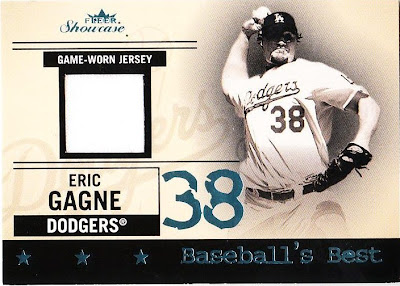 That is the card from Kevin of Orioles Card "O" the Day. It's a 2004 Fleer Showcase jersey scrap from Eric Gagne, back when he was king.

I realize that nobody wants Gagne cards anymore and they were probably throwing Gagne cards at collectors as they walked by, yelling, "Free! Free! For the love of God, take these, they're FREE!" But I've got a connection to Gagne, and I won't ever stop wanting his cards. Kevin knows this, and I'm grateful that he thought of me.

He also sent the Corey Wade OPC autograph card up at the top of the post. He pulled that from a box of '09 OPC. And I'm much obliged about that, too.

Wade had a miserable 2010. He was injured, underwent surgery and is trying to work his way back in Triple A. The Dodgers' bullpen will take all the help it can get, but I don't know if Wade can do it. We shall see -- which I can say about almost every Dodger.

Kevin also gave me hope for eventually finishing the '09 OPC set as he is collecting it, too. He sent several cards off my wants: 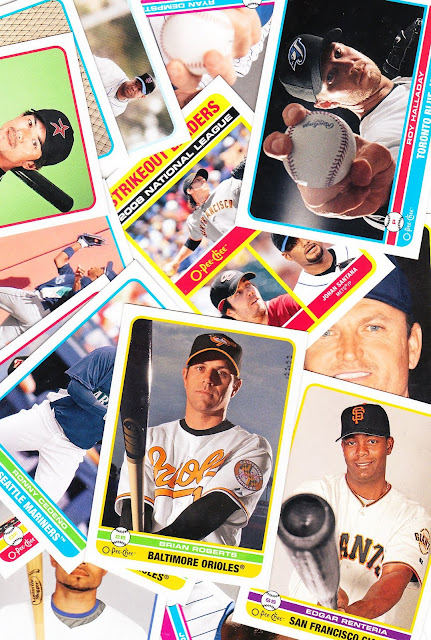 After thinking that I may never complete this set (there are no 40-percent-off OPC blasters around me like there are other places), I have received three separate packages containing OPC. It is quite reassuring that there are a few bloggers still interested in this wacky set. I have been reinvigorated!

The other Baltimorian who sent cards was the most righteous beardy.

Not only does he bust a lot of boxes but he also holds a lot of contests. The National contest included a guessing game involving what vintage Orioles he picked up at the show. I missed out the first time, but there was one slot left and I was fortunate enough to claim it with a reguess.

The best part was that since I finished sixth and there were only six packages, I didn't even have to pick which one I wanted. I just waited for whatever prize was leftover to reach my doorstep.

Yes that is the ultimate in laziness: I don't even want to pick out my prize package!

There's a bad side to that, though. It usually means ending up with some stuff you don't collect. 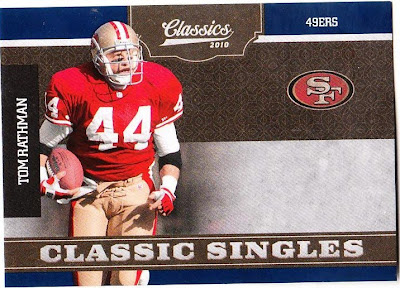 Here is one of the cards, which he picked up at the National. I believe this is a common variety base card from 2010 Panini Classics. Rathman comes from a time when I paid attention to football, so I do know the dude. That seems silly to say about someone so famous, but you wouldn't believe which players I don't know now. There are people who have competed in the NFL for a decade -- non-offensive line people -- and I've never heard of them. 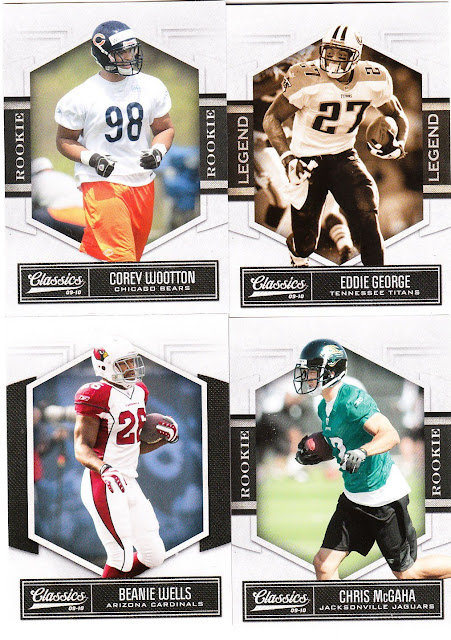 Four more Classics cards, three of them serial-numbered (Wells is not). Amazingly, I have heard of three of the four players here. Take a wild guess which guy I don't know. And if you say Eddie George, then you really take my lack of knowledge about the NFL way too seriously. 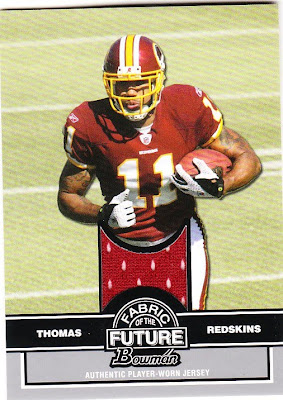 I also received this swatch card from 2008 Bowman of Redskins receiver Devin Thomas. He is one of the receivers that the always-in-chaos Redskins will depend upon this year. And I only know this because I read about it on the sports wire at work. One day, I was zoning out reading one of the million NFL camp stories that come over the wire (seriously, do we really need to write about who has been added to the practice squad?). Suddenly I saw the name "Devin Thomas" and I thought, "hey, I have a relic card of him!" Then I started thinking about how it was a jersey bit from a photo shoot and how goofy that is and the rest of the night at work was shot.

So, anyway, you may have gotten the gist that all of these football cards are up for trade. And they are.

Beardy likely took pity on me -- I don't know why since these cards were free -- and sent me this: 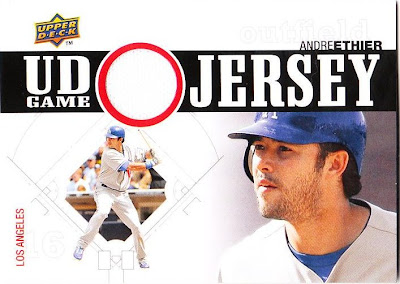 Awesome. I really need to officially list my Andre Ethier collection on my Dodgers I collect page.

It's great that both beardy and Kevin remembered folks who weren't lucky enough to attend the National. As Kevin said, the cards sent were an opportunity to "vicariously experience a small bit of the fun."

Anonymous said…
Man, I'd like that Devin Thomas. And any other Nats/Expos cards you might have. I'm pretty sure I have some stuff to offer. Want to work out a deal?
September 7, 2010 at 9:29 PM