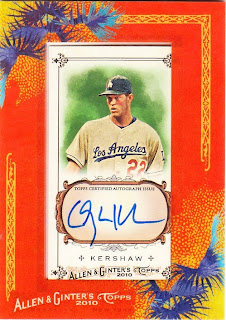 I didn't even know it was an annual event until Chris at Nachos Grande alerted me. And then out came the balloons and streamers and noise makers. Because I got an A&G Kershaw autograph for the second straight year, and I didn't have to pay a dime for it!

There are certain bloggers who pull more Dodgers hits than anyone. I think I've pulled three Dodger hits in my life. But beardy and Chris probably pull that many in a weekend.

Fortunately, they are nice enough to trade them to me. (As for any of you other bloggers who pull Dodger hits frequently and don't trade them to me, well, you sir, are rude, rude people).

I've made two trades with Chris in the last few weeks, and besides the A&G Kershaw card, here is the best of what he's sent my way: 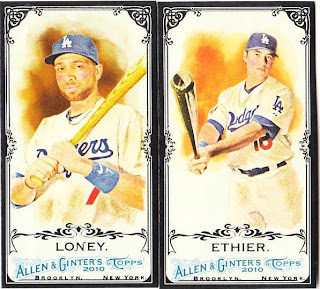 Two great black-bordered minis. I have dupes of the Ethier one now. I guess I should send it here. 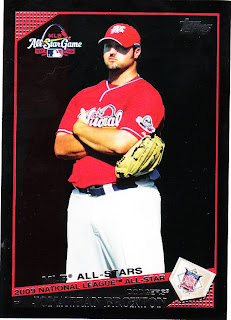 A Wal-Mart black card of the Dodgers' closer/former closer/wait he's the closer again/oh, crap, no he's not. This is back when he was an All-Star and before Torre turned him into damaged goods. 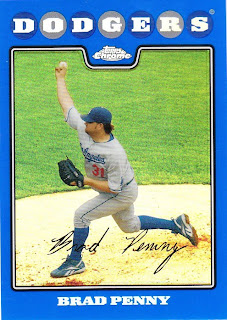 I am hypmotized by the wonderfulness of this card. I think if I get all the blue refractor Dodgers from 2008 Topps Chrome, I might be able to stop collecting. 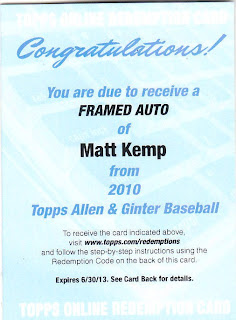 Oooo. I've been redemptioned! Topps is a little quick with the "congratulations." Congratulate me when I get the thing. We're not talking about having a baby here.

I have officially redeemed the code. And I have been informed that I am scheduled to receive my Kemp autograph by December 18. It could be a joyous Christmas. Or a bitter-and-twisted Christmas. It's up to you, Topps.

I also received several of the A&G This Date in History cards. I'm hoping I can complete this year's A&G set earlier than the previous two. We'll see.

Many thanks for the cool cards, Chris. Hopefully, we can celebrate the third annual NGSNOGKA day next year. Or better yet, how about if we skip the holiday and I pull the Kershaw this time?

And yes, the post title is a reference to that awful joke: "what do you call cheese that's not your own?"

I'm sorry. I can't help it. Stupid amuses me.

Play at the Plate said…
I love nachos.

What were we talkin' about?

Oh yea, nice lot o' Dodgers. I have to agree with you on those Dodger Blue Refactors. That's a match made in cardboard heaven. Or refractory metallic looking heaven. Or...well, you get the point.
September 5, 2010 at 9:40 PM

Nachos Grande said…
Glad you liked 'em. I managed to pull TWO Dodger autos in Ginter this year, but not a single Red. Maybe I should just buy your boxes next year and save you some money looking for 'em!
September 5, 2010 at 10:48 PM