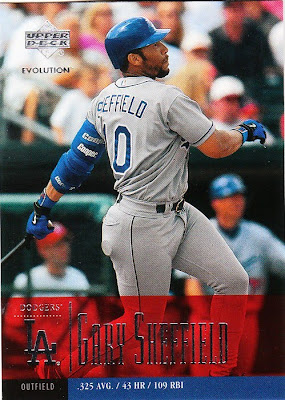 I didn't like the way Sheffield behaved for much of his major league career. He carried around a UFO-sized chip on his shoulder from the time he entered the majors. Because of that, even fans of the teams for which he played had problems rooting for him.

But unlike other baddies, like Barry Bonds and Albert Belle, I've felt admiration for Sheffield. I've caught a few glimpses of a sometimes-good heart in that menacing-looking appearance. Or so I told myself.

I think I gave Sheffield a pass for a couple of reasons.

First, he played for my team (but then, he played for a lot of teams). He was one of the few genuine power threats the Dodgers have had over the last couple of decades.

Secondly, he may be the most impressive hitter I have ever seen in my time watching baseball. When he was at-bat, it seemed like he could do anything every single time. He had the quickest swing I ever saw. Except for Bonds, Ichiro, and periodically Pujols, I've never been as impressed with a hitter as I have been with Sheffield.

So, when Spastik Mooss said he was putting his Dodgers Sheffield cards on the block, I jumped on them immediately. Sheffield played with the Dodgers during a period when I did not collect and also during a period of very cool cards.

Here are some of them: 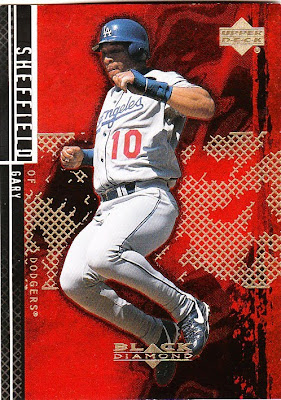 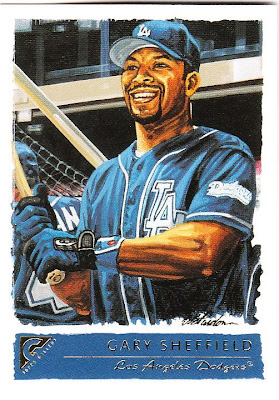 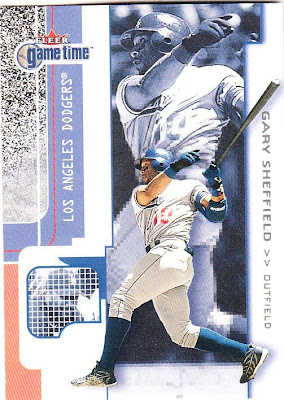 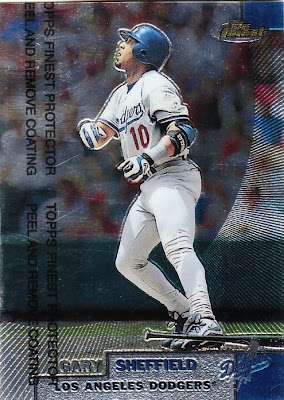 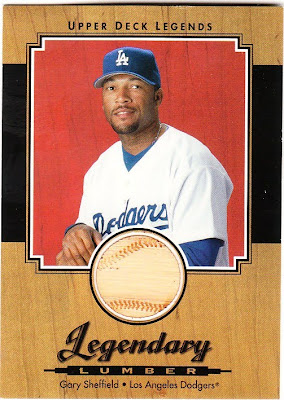 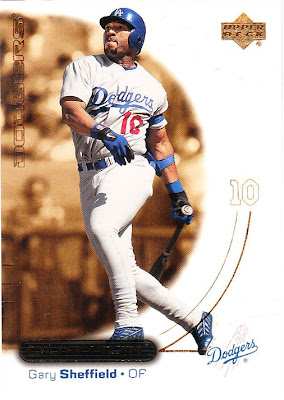 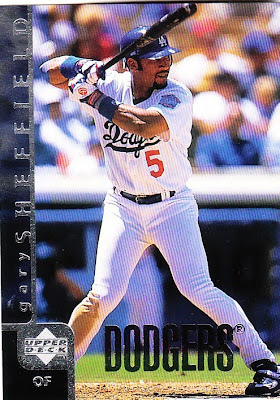 I absolutely love the Black Diamond cards from 2001. The bat relic card is cool, too. But the Gallery card looks frightening.

Many thanks to The Great Sports Name Hall of Fame for those Sheffs, a couple other Sheffs, a Nomo card I needed, and some Warner Brothers Dodgers cards that I'll have to save for a potential post. I've finally gotten your cards together, Mooss, and they should be out at the end of the week.

But I also received a bunch of other Sheffield cards from caljr3000 of Too Many Grandersons. Wait until you see THAT card package.

I'll show some of the Sheffields here first, because I noticed something: 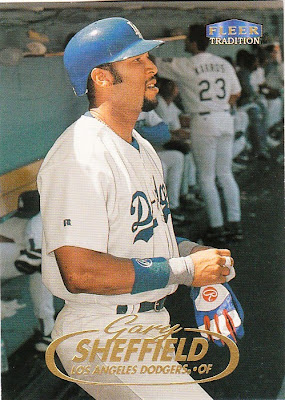 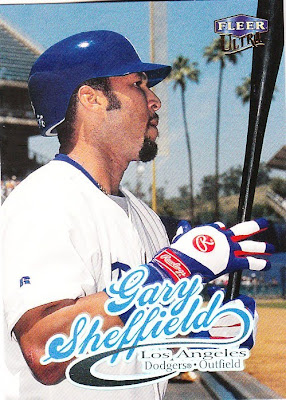 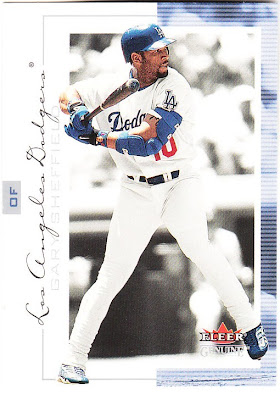 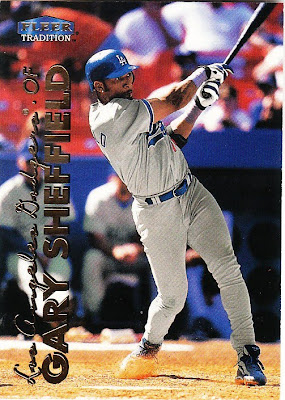 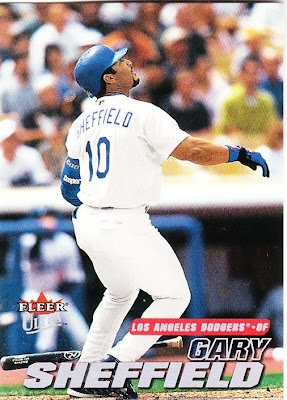 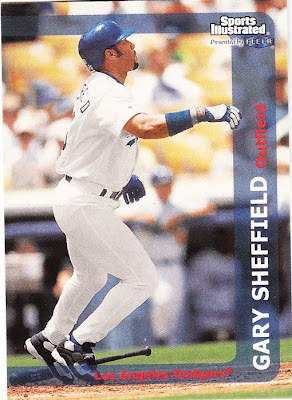 OK, I cheated a little with the fourth Sheffield card. He's in a road uniform on that card. But as for the rest, did you see what I saw?

They are all Fleer cards and put together it looks like they are a sequence of photos from the same at-bat, from walking out of the Dodgers dugout to admiring a blast. He's even wearing the same batting gloves and arm-guard in some of the pictures.

I think I'm pushing it a little (the backgrounds in the last two photos don't look identical), but it got me thinking: with all the card lines that companies put out in the late 1990s and early 2000s, how often did they use the same photo sequence for multiple cards over multiple years? It had to happen a fair amount.

Also, on another Sheffield topic, I'm tempted to put Gary Sheffield in the "I'm Badass and You're Not" Club. That club has been reserved for players from my childhood -- 1970s and '80s players. Us fans have a bias against modern-day players while we romanticize past players. So I don't know if I can put Sheffield in the club without people crying "steroids!"

But it's a thought.

I thought he was badass at the plate.

Captain Canuck said…
as a fan, I never had a problem with Gary when he was a Brave. He played hard, and was a fearsome hitter. How he got around on inside fastballs with that hitch in his swing I'll never know.

His teammates in the clubhouse felt completely differently than I however.
September 22, 2010 at 2:49 PM

SpastikMooss said…
Glad you liked the cards, and glad it was part of a Sheff post here over on your blog. The guy got harder and harder to like as his career continued on (thinking Yankees and Tigers and speculations specifically), but man could he mash.
September 22, 2010 at 3:09 PM

Jim said…
Here's my response to your question about photos from the same batting sequence. I'm sure there are more!:

If you want to put a modern day player on the list how about Adrian Beltre? I never noticed before this year but he is really intimidateing to look at. I don't remember who it was (maybe even you) that asked who the scariest guys in baseball were, well he should have been on that list. I wouldn't want to meet him in a dark alley.

Oh and don't touch his head, don't say I didn't warn you.