Sometimes I know what I'm doing 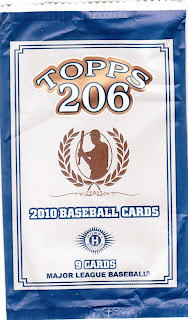 I am not terribly smart when it comes to collecting cards.

I do stupid things. I buy blasters. I buy repack boxes. I spend too much on shipping. I'm sure there are other stupid things that I do that I'm not even aware of -- until you good people remind me. What are friends for if not to point out your failings?

Anyway, I stumbled across a rare moment of clarity recently. It had to do with the Topps 206 set that is out in stores now.

I don't like this set. I mentioned that a little while ago. It killed retro for me. But aside from that, I plain don't like it just because I don't like the way it looks. Or in the language of the schoolyard, "I just don't like its FACE."

When sets like this come along, collecting gets difficult. As a team collector, I must have all my Dodgers. But I don't want to blow money on the other inconsequentials. When I pull Pirates or Rockies from a set that I dislike, I feel too stupid to live.

Fortunately, A Cardboard Problem was holding a case break of 206, and the Dodgers were mine for a small fee. And that's when I arrived upon an intelligent thought.

Embolded by this light-bulb moment, I entered the break, I saw my cards on video, and now I see them here in my clutches. And I don't have to buy any more 206 for the rest of time. I am so proud of myself right now that the smugness is probably seeping out of your computer screen and getting on the carpet.

Sorry. But I did good.

Let's take a look at the Dodgers in the set: 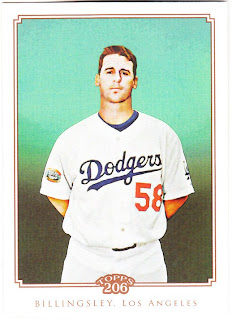 Chad Billingsley. Thrilling, isn't it? I loathe the "no caps" rule. I know why it was done. I respect accurate tributes to older sets. But I still don't like it. It's 2010, boys. Put a cap on. Thank goodness they're all wearing baseball uniforms. These cards are a load of laundry away from being those awful senior photo cards from the early 1990s. 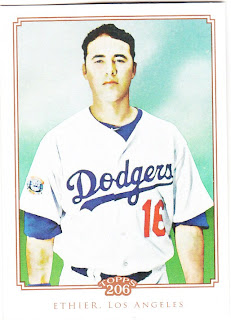 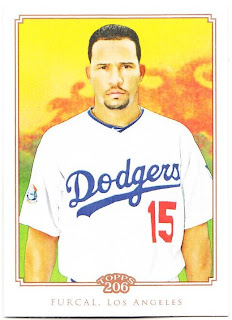 Rafael Furcal. One improvement over last year's cards are the added features in the background. My lack of knowledge about cigarette-era cards is phenomenal, so I don't know if this is a tribute to a past set. But I like it a lot better than the blank backgrounds from last year. 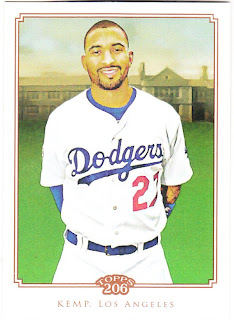 Matt Kemp. Apparently posing in front of a penitentiary. That's a tad spooky. 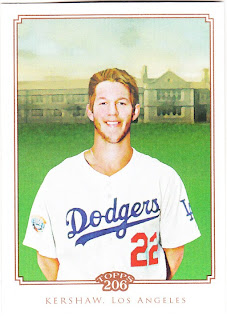 Clayton Kershaw. Let's hope the security is adequate back there. Hope you have your running shoes on, Clayton. 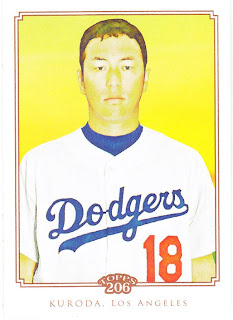 Hiroki Kuroda. Here is one of those blank backs that I don't enjoy. 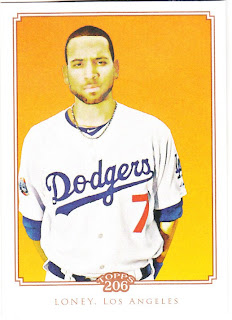 James Loney. The off-center-ness must be another ode to the original set. Either that or it's some sort of T206-1982 Fleer mash-up. And if that's the case, I take back everything bad I said, and I will buy every blaster that I see within a 60-mile radius. 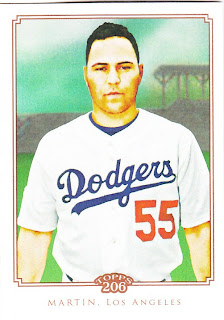 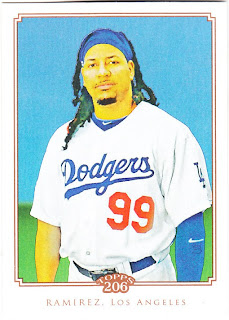 Manny Ramirez. I heard that Joe Tinker wore a doo-rag back in the early 1900s, and they told him to take it off or he wouldn't be in the set. Tinker refused and he didn't get in the set. True story. Standards are lot lower these days. 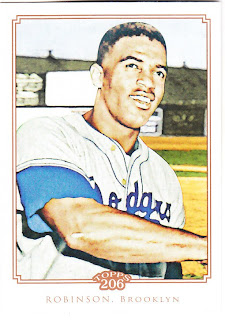 Jackie Robinson. Even though I'd like to see other old-timey Dodgers in sets once in a while, I can't get mad at getting a Robinson card.

Them's the Dodgers. But, as you know, modern-retroish sets can't leave well enough alone and we need pointless parallels. Here they are: 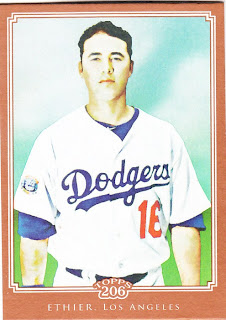 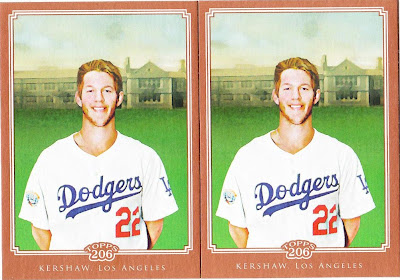 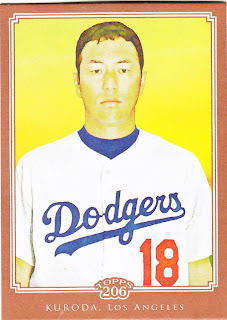 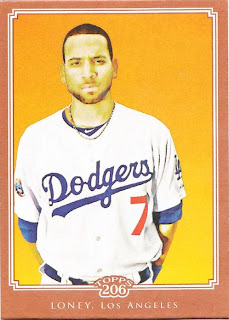 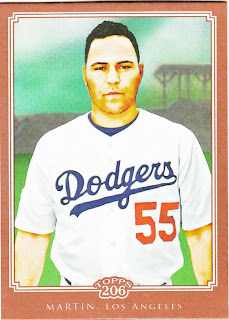 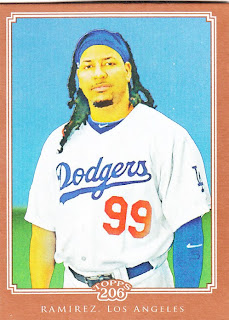 I know what you're saying. "Where are the Billingsley, Furcal, Kemp and Robinson bronze parallels?"

Well, they didn't show up in the case. Will I now try to chase those down? Hell no. But feel free to send them to me. (the Kershaw, by the way, is not a parallel of a parallel -- thank goodness. It's a dupe).

Of course, that's not all with the parallels. We must have our minis, which is the highlight of the set for most collectors: 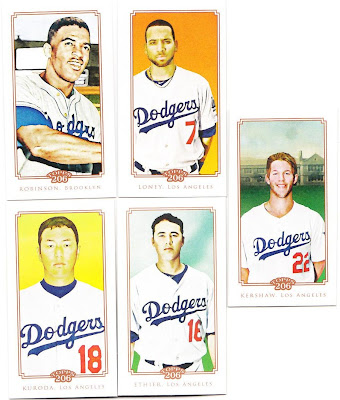 There are a few guys missing from here as well, but I don't do the mini chase thing either, although I'll probably put up a want list.

The Kershaw card is a Polar Bear back mini. A couple are Piedmont backs and a couple are Caramel something. I feel dirty even mentioning that. And I refuse to show them. I am really close to going on an anti-variation back crusade. Complete with protest signs and bullhorns. When I officially go off my rocker, you can expect to see things like that.

OK, onto what you would call the hits from this particular set.

The first is the dreaded variation back: 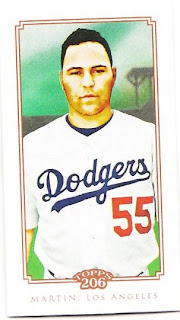 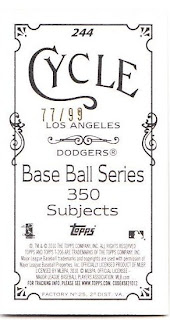 I have nothing more to say about that. 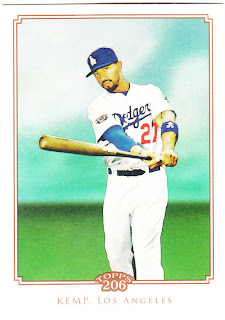 The second is a short-print. Short prints feature players wearing caps. In this set, you have to pay extra for a player wearing a cap. That is so, so wrong.

The third hit makes me giddy: 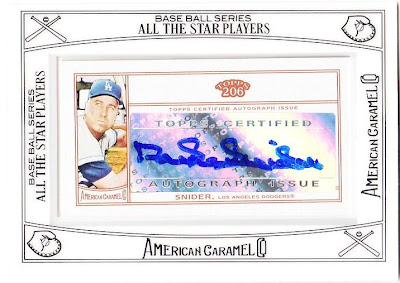 Look! The Duke of Flatbush signed my foil sticker!

I still love it. Snider has signed a few cards TTM for me, which this card can't beat with a tire iron. But it's still great.

Topps 206 apparently scrapped the blue borders on the hits, which is too bad. But the white borders do look better in person than they do on the blogs.

I am still unclear on why this set exists. I know that some collectors prefer this to A&G because this is an all-baseball set. But I would imagine that is a relatively small number of collectors. Generally, I think A&G and Topps 206 appeal to the same kind of collectors. And I don't know how both can peacefully coexist -- meaning remain profitable for Topps.

I know A&G isn't going away soon. And given the number of people I've come across already who said they wouldn't collect this set, I don't think the future forecast for 206 is bright. But that's just my hunch.

Regardless, despite the mug shot-like poses and the lack of caps, I will enjoy my 206 Dodgers and my rare moment of clarity that brought them to me. A boatload of thanks to Marie and Sooz at A Cardboard Problem. You've saved me from myself once again.

Jeremy said…
Matt Kemp and Kershaw look like they are on Shutter Island. I like the different backgrounds this year. I just wish if they were using a building in the background that they wouldn't reuse exact same "building" each time. The SP's are the nicest though with the action poses.
September 8, 2010 at 8:47 PM

Cameron said…
One thing I started doing this year is buying Reds team sets of all the new card sets that come out. You can get them on eBay for around $5 depending if they include SP's which I'm not a big fan of. It'll save you a lot of time, money, and space.
September 9, 2010 at 8:57 AM

Fug-lee. I'm not touching this set.

But I did like the homage to the early Fleer sets - though the pictures are a bit more in focus here!
September 9, 2010 at 9:47 AM