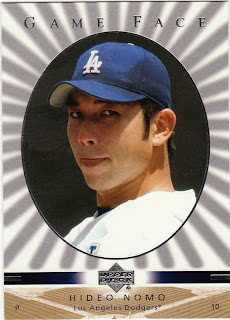 I was just looking up the current weather conditions in Osaka, Japan. It's 66 degrees there with scattered clouds. They might get some rain tomorrow. But that sure beats the pants off the foot of snow we have here with more bleepin' white crap on the way.

So, why the Far East forecast? Well, if you're still asking that after staring at the card up top you're having a rough day aren't you?

On Thursday, I received a package in the mail from Ben of Cardboard Icons, and it was chock full off Dodgers. Plus, out of the 75 cards that he sent, 33 of them were of Osaka, Japan's pride and joy, Hideo Nomo. I don't know why a Red Sox fan would have that many Dodger Nomo cards, but I'm not arguing it. If you ask me, it's a beautiful thing.

Ben finished a strong second to Mark of Stats on the Back in terms of the most cards of one player sent to me in one package. Here's the list (I don't know why I keep track of this stuff):

I don't think anyone will touch old Orel. And I don't think I want anyone to try. But that doesn't mean I'm not grateful for all the Nomos. These are some very cool cards that Ben sent. (By the way, Ben and I share a profession, and you should really check out his blog because he's a lot more on top of the goings-on in the hobby today than I am).

Here are some of the Hideo highlights: 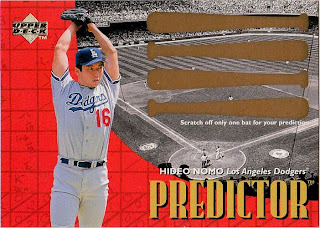 1997 Upper Deck Predictor. This is kind of cool. You apparently scratched off one of the bats, revealing a player goal. If the player met or exceeded the goal during a game, you mailed in the card and received a "Totally Virtual card." I'm not sure what that is. Sounds like some on-line type of card, something like etopps or toppstown or something of that ilk. OK, maybe it's not that cool after all. 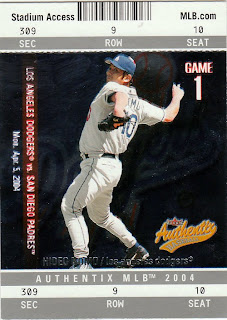 2004 Fleer Authentix. Another "Night Owl is confused" card. It's a cool-looking card, but I don't think Nomo wants to be remembered for the game listed along the left side. On April 5, 2004, the Dodgers' season-opener, Nomo gave up seven earned runs in five innings, including a grand slam to Phil Nevin and another HR to Jay Payton -- both in the fifth inning. The Padres won 8-2. That's not one to put in the scrapbook.
And if you're wondering, Section 309 is in the left field bleachers at Dodger Stadium, which is possibly where one or both of those home runs landed. 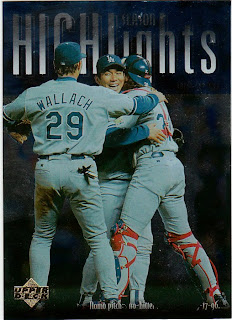 1997 Upper Deck, season highlights. A more pleasant Nomo memory: his no-hitter against the Colorado Rockies in 1996. It's the most recent no-hitter in Dodger history. 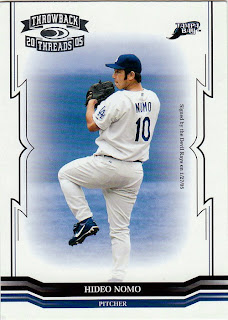 2005 Donruss Throwback Threads. He's wearing the Dodger uniform but he's a member of the Devil Rays. These cards always throw me because I never know whether I should put them in my Dodgers team binders or leave them out. As it stands now, I don't put cards like that in my team binders. But I do put in players who are wearing a different uniform but are listed as Dodgers. I guess my question is, what do you team collectors do? 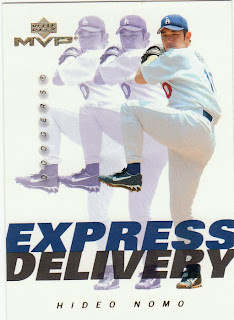 2003 Upper Deck MVP subset. I absolutely love this card. It looks great. Receiving all the Nomo cards over the last few months made me realize how many nice-looking cards there have been of Nomo. Here are just a few other really nice ones that Ben sent me. 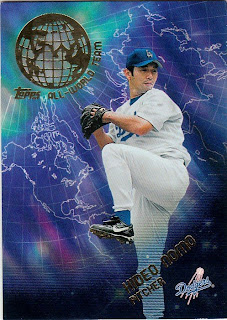 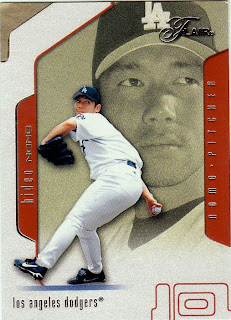 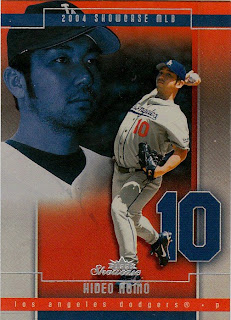 Good stuff. And, of course, the best-looking cards are the shiny ones (I'm not talking late 1990s tacky shiny, I mean CHROME shiny). 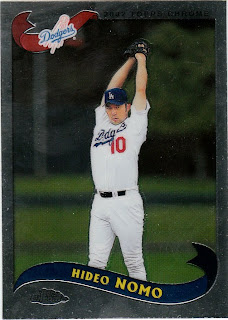 I know that doesn't look great scanned, but you all know what it looks like in person. Chrome cards have been going strong for quite awhile now. Most collectors still like them a lot. I sense interest in jersey and other game-used cards waning, but I don't get that sense with chrome cards. I don't think chrome will be around forever, but it seems to have staying power for some reason. 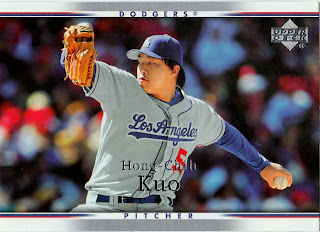 Ben did send some other non-Nomo cards. He filled a void in my collection by sending several 2007 Upper Deck Dodgers. For some reason, I had few of those. Here's Hong-Chih Kuo, who needs to have an injury-free season if the Dodgers aren't going to pick up another reliever. 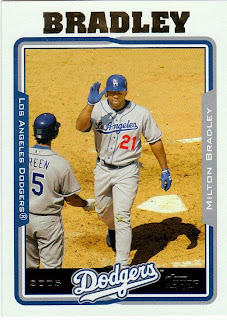 Milton Bradley, 2005 Topps. Bradley can hit, but he had a rough time in L.A. That's OK. Because every time I see Bradley now, I think of this guy: 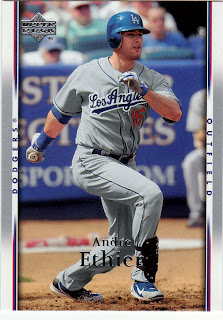 Andre Ethier, the man the Dodgers traded Bradley to get. And that's a trade that worked all right. 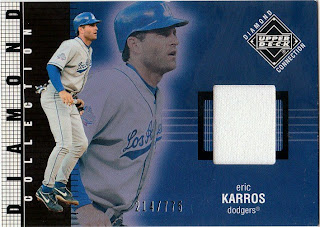 Finally, I received a nice jersey card of Eric Karros (2002 UD Diamond Collection). Very nice, very generous, even if these cards are everywhere these days. I still rather like them, even if it's just fabric. (Just no pants cards, please. Those creep me out).
Ben said this was a Christmas present. That's very nice of him. Merry Christmas to Cardboard Icons! (Maybe I'll have some cards to you by MLK Day).

To answer your question, "I don't know why a Red Sox fan would have that many Dodger Nomo cards ...": It's because I've bought a ton of wax over the years. You would not believe the amount of cards I've amassed of certain players, particularly marginal stars from the mid 90s to early 2000s.

And I apologize for the condition on that Erik Karros jersey card. A few years back when I'd trade set needs for stacks of common game used, I'd receive a couple jersey cards with creases. (Yes I know how they got there ...) That said they work well as freebees to team/player collectors. The crease ruins the monetary value, but for a team collector the swatch still remains pretty neat.
December 22, 2008 at 9:49 PM