November 05, 2016
(Today, Nov. 5th, has always been the threshold date for me for seeing snow. It probably goes back to a year when I was a kid in which I noticed the first snow of the season on Nov. 5. So now, if it snows before that date, I'm annoyed. If it snows after that date, I'm still annoyed, but accepting. That's life in the Northeast. Time for Cardboard Appreciation. This is the 249th in a series): 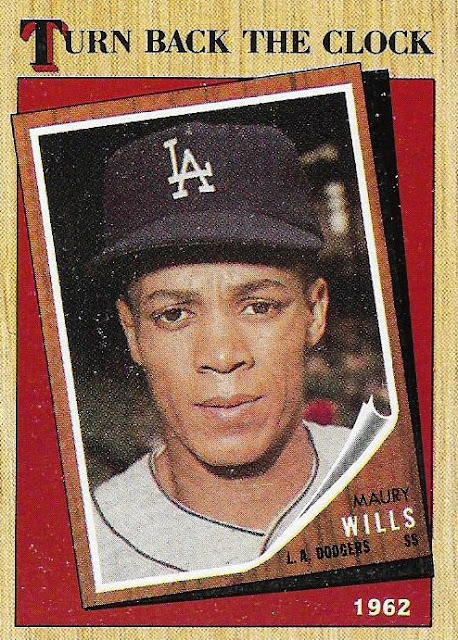 I hope all of you non-Arizonians turn back your clocks with glee tonight. Outside of a couple obvious days, this is my favorite day of the year, a day in which I can gain a well-deserved breather with an extra hour of sleep.

To celebrate Turn Back The Clock day, I'm featuring a Turn Back The Clock card from the 1987 Topps set. I've already done a profile on these cards in hopes that they would reappear in a modern set. But if they have, it's been in one of those online exclusives, which I pretty much ignore because I refuse to have my hobby run by a deadline.

However, I would gladly accept an online exclusive if it was an actual 1962 Topps-style Maury Wills card.

As you know, the flashback 1962 Topps card featured in the 1987 Topps TBTC subset doesn't really exist. It's also the third time that Topps featured that nonexistent card in one of its sets. 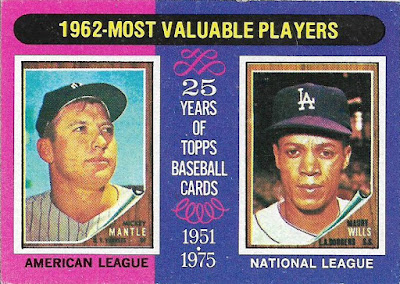 The first time it was created was for Topps' 1975 MVP retrospective. Wills never appeared in the 1962 set, so the company made a mock-up (it's not the only MVP subset card for which it made a mock-up, it also did so for Roy Campanella, but the Wills "card" has endured much longer). 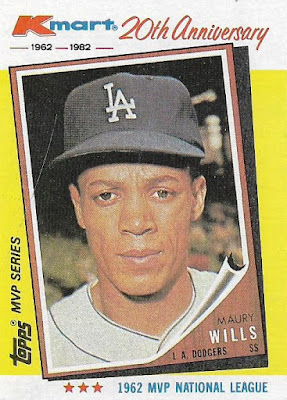 No doubt collectors who weren't around to collect the 1962 set probably sought out the 1962 Topps Maury Wills card before figuring out it didn't exist. I know there was a point when I thought it was in the '62 set.

It is one of the original "cards that never were" and has been featured so many times -- and in sets that were issued by the bushel-full in the case of the '82 and '87 sets -- that it's an actual card in everyone's consciousness.

I would like Topps to go the next step and create a physical card of the '62 Maury Wills for people to collect and touch and own. Preferably not a card with some sort of "window for ordering" or any of that nonsense.

There was probably a greater desire for a card like this before the Internet Age. Today, with digital "cards," any virtual card in any virtual design can be created. There are now entire multiple sets of "cards that never were." And some collectors appear to be completely content with that.

But I don't live in the virtual realm and have no plans to do so. I want my physical cards to join me in the physical world. A 1962 Topps-designed Maury Wills would be an excellent partner.

Anonymous said…
I agree, I've been looking at that non-card for 40 years, it's time it were made into a real card. The simplest solution: Topps Archives. And for those who don't like the thin cardboard stock of archives, another simple solution: "old school cardboard" variations. There you go, Topps. Make it happen!
November 6, 2016 at 7:15 AM

Commishbob said…
Whenever I see that non-existent Wills I am reminded of those long ago days in the schoolyard at St. Mary's in New Jersey. Me and all my card collecting friends never knew why there were no Maury Wills cards in our Topps sets and had no real way to find out for sure. Outside of the annual debut of the Mantle card nothing created a stir like the 1963 Fleer Wills. It was like it confirmed his existence.
November 6, 2016 at 9:47 AM

BaseSetCalling said…
Long Time, no see. If only I had bought out my local K-Mart at 10 cents a box for that set back then. I think Topps and Wills kissed and made-up but not in time for the apropos Heritage set. 2016 was lesser than 2015 and I thought that Topps is watching me more than ever, delivering a set like that. But for us, baseball (card) fans, there's....
November 8, 2016 at 12:52 AM