Just 2 cards, but they're kind of interesting, kind of

November 26, 2016
Not a lot of cards have come to the house the last couple of weeks. It's that end-of-the-year busy time, and money is devoted to various holiday expenses instead of cards. As mentioned before, I don't get involved with the Black Friday hobby deals, because spending money on myself at this time is not recommended if I know what's good for me.

I have just two cards on my desk that I have received that are waiting to be shown.

Each arrived as a one-card package. Each has a tale to tell. 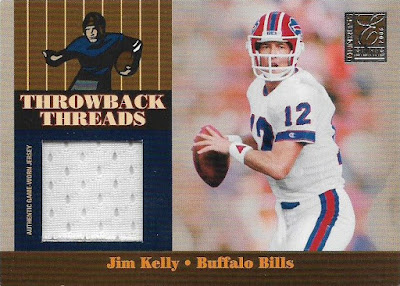 The first is a jersey card of Jim Kelly sent to me by Matt of Bob Walk The Plank. It is my first jersey card of Kelly, and probably only my second or third jersey card of an NFL player ever. My NFL collecting is very limited.

But if you're going to throw a jersey at me, make it of the quarterback when I covered the Bills back in the late 1980s.

This card is from 2006 Donruss Elite. The back assures that this swatch was taken from an actual jersey worn by Jim Kelly in an official game. I am fully on-board with that.

I was watching the Cowboys-Steelers game last weekend and the announcers were talking about how Dak Prescott simply does not throw interceptions. Following the NFL in my usual "know enough to get the newspaper out" way, I was stunned to find out Prescott had thrown two interceptions all year. "Hell," I thought instantly. "Kelly could do that in a single half." Then the announcers read my mind by saying that Prescott doesn't force the ball to receivers. "Yup," I said to the TV screen. "Kelly did that all the time."

Let's check out the next card. 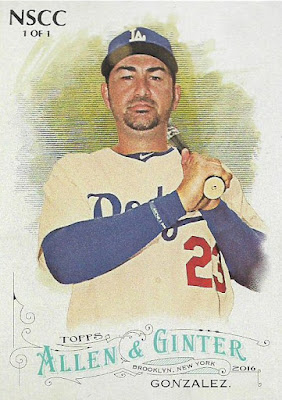 This card is from last summer's National Sports Card Convention. Ryan Cracknell of Trader Crack's and Beckett sent it to me.

He asked whether I owned the Gonzalez NSCC card yet. Intrigued, I said "no," and, "yeah buddy, I'd like it."

I had no knowledge of the cards being offered to NSCC guests. The only knowledge I had to go on was of a nifty Jackie Robinson A&G mini from a convention several years ago that I own. That one is pretty cool.

The problem is that it isn't much different from the 2016 Allen & Ginter card of Adrian Gonzalez, which is right here: 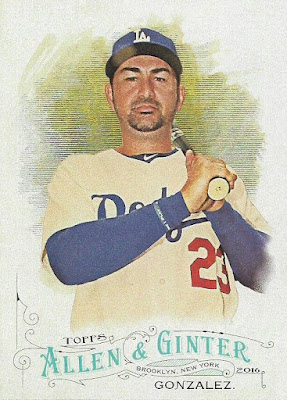 See anything different between the two?

That's right, a gold foil stamp proudly proclaiming that it's a 1 of 1.

You're lying if you do. There is no other difference. 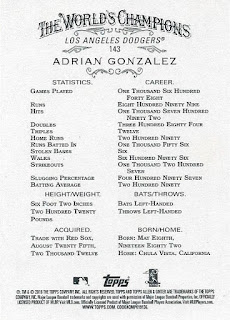 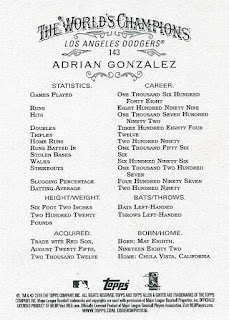 Those are the backs of each respective card. There is no difference between them. I swear I didn't merely scan the same back twice.

I have precious few 1 of 1's in my collection, so I don't stare down the mouths of gift-horses, but, gee whiz, could you have done something else to make this "1 of 1" special? Drawn glasses on Gonzalez? Given him earrings? Something?

I am so glad I was born before the days when slapping gold foil letters on a card automatically made it exclusive. It's just shiny letters, you guys. Don't fall for it.

But cards like this are as close as I've gotten to the National Sports Card Convention. So that's kind of something. And I'm kind of falling for it.

And the card desk is finally clean. That's definitely something.

Two Packs A Day said…
With regards to the NSCC, that's just Topps being Topps. I believe the Hawaii dealer show also took base cards and just put a Hawaii show logo on the card. The Holiday set should be just the normal cards wtih a snowflake on them. The Topps 65th factory set should just be the normal set wtih a 65th logo on it. You'll see if you've been around long enough that Topps like to phone things in - cards with a special foil stamp instead of a remake of the card or using the same photos over and over again for a player.

Fuji said…
I pulled for Kelly and the Bills in each of those four Super Bowls. Shame they couldn't win one. At least Donruss pulled through and made a great looking memorabilia card of him.
November 26, 2016 at 11:42 PM

BobWalkthePlank said…
Glad you liked the card. I'm getting caught up on my blog reading from this past weekend.
November 30, 2016 at 2:17 PM