The second wave of retro 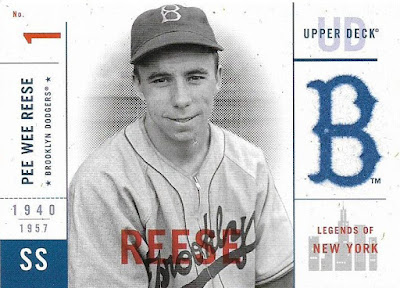 I have loved retro-style baseball card sets since I was a youngster. The old-style Renata Galasso/TCMA sets from the 1970s and early 1980s captured my imagination and interest in history. Seeing old-time players on cardboard was a thrill.

The first set I ever ordered through the mail was a retro set, a 12-card TCMA All-Time Dodgers greats set from 1975 that looks like it was produced on a mimeograph.

The sets that showed up at this time I consider the first wave of retro. Most of these sets are considered "oddballs" and span a long period of time, going back to the '50s and earlier. The early '60s Fleer sets and '70s sets like Kellogg's All-Time Greats were rare cardboard glimpses of the players who toiled on the fields during dad's and grandpop's era.

Then came the second wave of retro.

Although there were retro card sets earlier in the '90s, like the Ted Williams Company sets, I point to the 1999 Upper Deck Century Legends set as the one that sparked the second retro wave. The 131-card set contained current players but mostly yesteryear players like Carl Hubbell and Al Simmons and others who may not have been in a set since the TCMA days.

In the years that followed, collectors would be besieged by retro sets, both sets that contained retired players and sets on old-time designs. Here is an abbreviated list:

There are many others. The sad thing about this second wave, which I'd say ran from 1999 until Upper Deck and Fleer disappeared from baseball cards, is that I missed almost the entire era. I wasn't collecting at all when the wave began, and just got back into the hobby on the strength of my favorite retro set from the time, 2004 All-Time Fan Favorites.

There isn't a lot about baseball cards that I miss during the period when I wasn't collecting, roughly from 1995-2005. But I sure wish I was active when retro sets like Fleer Greats and Topps Retired Signatures were going down. That must have been some kind of fun.

Another favorite is the 2001 Upper Deck Legends of New York set. In a way, the set is fatally flawed, because it contains cards for Yankees and Giants, my two least-favorite teams of all-time.

So I just focus on the Dodgers and the greatness of the blue.

Recently, gcrl of Cards As I See Them, sent me a bunch of Dodger needs from that set. 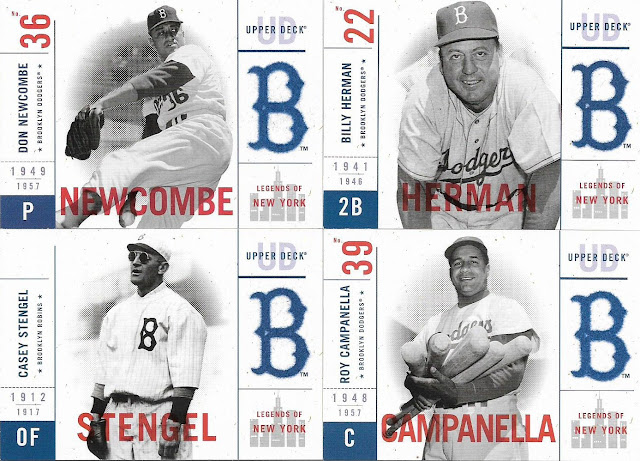 These are considered the base cards, I guess, as each card features the player's full career stats. That Stengel card will creep you out under a full moon. 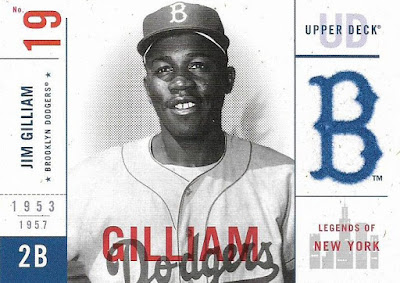 I've written about these cards before, and how the fuzziness on them (the "B" on the card is made from some sort of felt material) weirds me out. Fuzzy items like this bother me like nails on a chalkboard bother other people. I actually try to handle these cards so I'm not touching the fuzzy part -- I know it's odd, but it's got to be done. 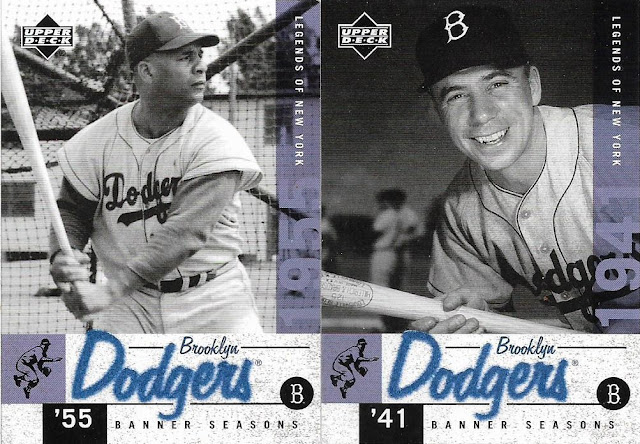 This is a different design in the set. I needed a number of these so I'm glad Jim sent them along. The write-ups on the back tell a short story of a famous Brooklyn Dodgers season.

The word "Dodgers" is fuzzy. I'll be handling these cards by the tops, yes sir. 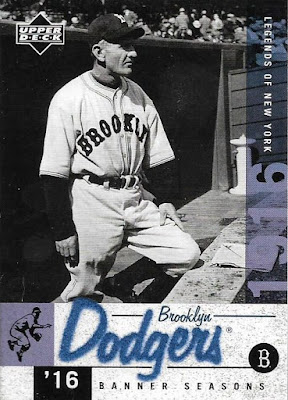 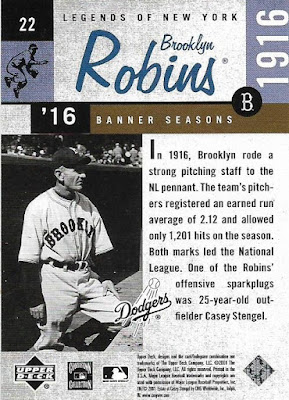 Interesting to me that the front of the Stengel card says "Dodgers" and the back calls the team by the nickname it carried at the time, the Robins. 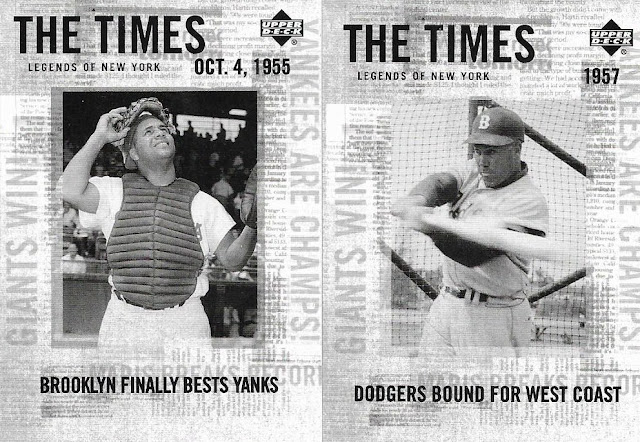 As a newspaper guy, it pains me to say that these cards are the dullest of the bunch. But newsprint-style isn't all that exciting without some color to spruce it up.

I should be grateful though as these cards have no fuzz.

All of the above cards from Jim get me down to needing just three more for the set. I might actually look into grabbing those three sooner than later just because retro sets like this still have a hold on me.

For the record, my favorite retro sets from this "second wave" are the Fan Favorites cards, the Upper Deck '70s Decade set from 2001, the Fleer Greats set from 2006 (especially those awesome inserts), and, of course, 2008 Allen & Ginter.

Retro sets are here to stay with Archives, Allen and Ginter, Heritage and Gypsy Queen going strong for Topps and Panini's Diamond Kings remaining popular. I'd love for a third retro wave to show up, but I think you would need a few more card companies for that.

Just keep the felt or shag carpet out of the set.

Don said…
Don't sell the mid-90s short. That period had Ted Williams; Action Packed; Tools Archives (53 and 54 set reprints); Upper Deck All-Time Heroes; and Upper Deck BAT. There might be a couple more, but companies were experimenting during that time period.
November 7, 2016 at 10:04 PM

GCA said…
2004 Timeless Teams is one of my all-time favorite sets ever. The use of different photos of retired players is always awesome. Fan Favorites is kinda the same way. As is 2007 Sweet Spot Classic...
Too bad the contract situation these days screws us out of getting more sets like these.
November 8, 2016 at 9:25 AM

Brian said…
WOW! I thought my dad was the only one with the "creepy fuzz syndrome".
The fuzzy skin on a peach would make him shudder and would have me or Mom peel before he could eat it.
November 8, 2016 at 9:57 AM

defgav said…
Aw man, I love the fuzz! I'll often cut out windows in a penny sleeve so I can feel the fuzz and still protect the corners.
November 9, 2016 at 5:47 PM

Fuji said…
I'm a huge felt guy. Probably stems from the days when I would walk around in velour shirts. At least we can agree on UD Decade.
November 11, 2016 at 10:47 AM

carlsonjok said…
Interesting. I hated 2006 Greats of the Game. It was probably because I first discovered and loved 2004 Greats which were really nice cards with thick stock and an embossed surface. 2006 was after Upper Deck took over Fleer and was on plain card stock. A major disappointment to me. I busted a box of 2006, but never had any interest in building the set. I'll have to look and see if I even still have the cards.
November 12, 2016 at 9:24 AM