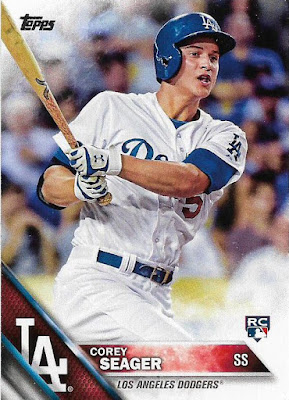 We have just wrapped up 10 years of the much-maligned rookie card logo.

To me, the rookie card logo doesn't have much of a point. The logo most definitely does not signify the player's rookie card, not with Bowman and any number of Panini and minor league products out there. I own 17 cards of Corey Seager that were created before the above "rookie card." And for the general collecting public this is the case, too, as a player's first Bowman or Bowman Chrome card has been deemed the "true rookie card" for players for years.

The logo has even less of an impact on someone like me, who doesn't collect rookie cards and is far more dismissive of them than many other collectors. For me, the players who receive the rookie-card logo are often unnecessary intrusions into Topps' flagship set every year (and many of the other sets it puts out as these players show up in Heritage, Allen & Ginter, Archives, Chrome, Finest, GQ, etc.). As someone who views the flagship set as a historical chronicling of the past year (and the current year in the case of Update), many of these rookie-card logo cards don't fit in because the players on those cards barely had an impact on the season.

Corey Seager is an exception, of course. But other rookie-logo players look like they've been forced into the set for reasons that are still beyond me.

The rookie-card logo selections seem so random at times that I've taken to calling the rookie-card logo player "the golden child." They are the players Topps deemed worthy of appearing in a set, with other players who had actually Done Things On The Field, through some sort of formula that we don't know and then anointed with the logo.

To illustrate, I thought I'd go through each of the Dodgers' rookie-card logo selections for the last 10 years (this is for flagship only). 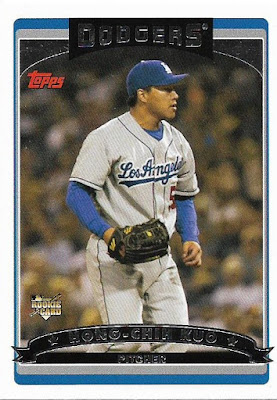 Hong-Chih Kuo was the first Dodger to feature the rookie card logo, and therefore the first "golden child". Kuo had played a mere nine games in the majors when he showed up in the 2006 Topps set. He did have some impact on the 2006 season, appearing in 28 games, so I consider this a decent choice for set inclusion. 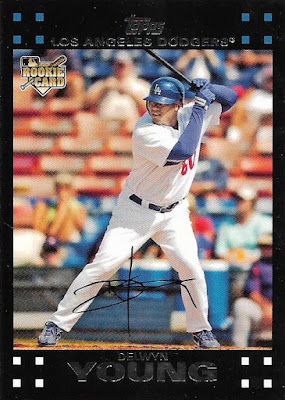 Delwyn Young had played eight games in the majors when he received a card in the 2007 set. In 2007, he played a whopping 19 games. In 2008 he played 83 games. So if we were going by 1970s and '80s rules, we would have first seen a card of Delwyn Young in the 2009 Topps set. But we've got to wedge our rookies into every set we can. I have a difficult time believing a Delwyn Young card issued two years earlier is selling more cards. 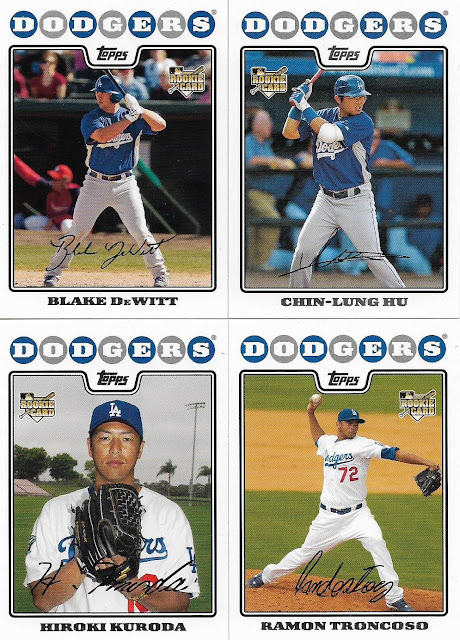 You lucky Dodger collectors! In 2008, Topps issued a whopping four players with rookie card logos. Out of these four, only Chin-Lung Hu had played in any major league games before 2008. Fortunately, all four of these players received appreciable playing time in 2008. 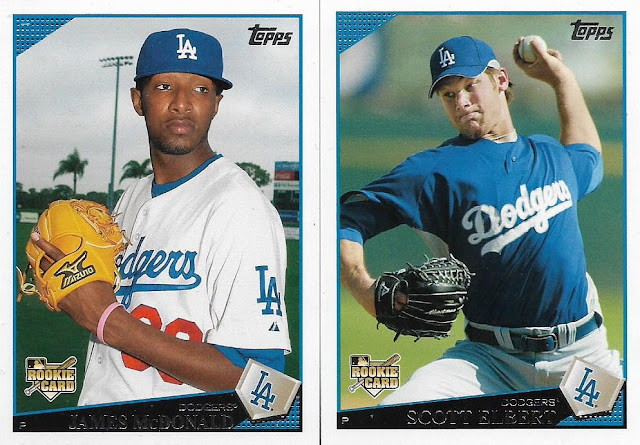 James McDonald had appeared in just four games before 2009, Scott Elbert had appeared in 10. Both greatly improved their game time in 2009, so these were suitable inclusions in the set I suppose. Nobody was getting rich, though, off of McDonald or Elbert rookie cards. We could have waited until 2010 to see them. 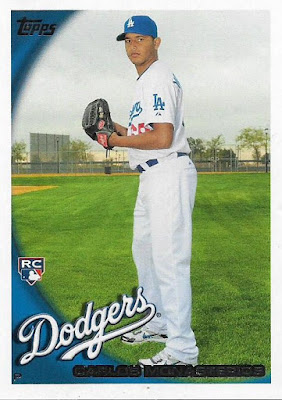 The rookie card logo changed in 2010 with Topps' agreement with Major League Baseball. Why MLB has to get into the rookie card game, I don't know.

Carlos Monasterios didn't play a lick of major league ball until 2010. He appeared in 32 games, mostly in relief, for the Dodgers in 2010 and that was it. No return to the majors. 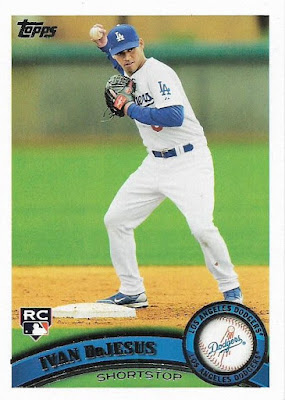 Ivan DeJesus was the Dodgers' designated "golden child" in 2011. DeJesus didn't play his first major league games until 2011 and even then he played in just 17 games. 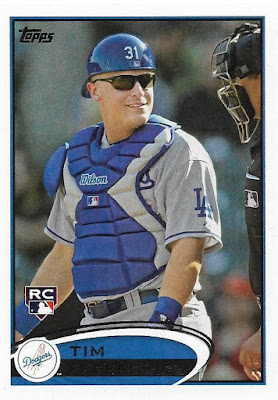 As is typical with the golden child, you will not forgot him. In the year that he is golden, he will appear in abundant sets baffling you all the while as he burns his name into your brain. 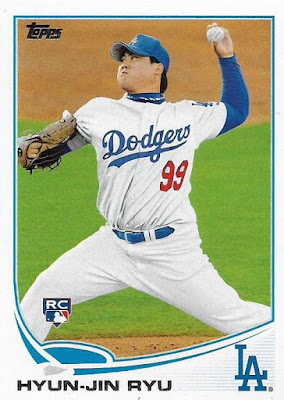 Hyun-Jin Ryu was signed by the Dodgers in the 2012 offseason, so of course he didn't play in the year preceding this card. By the time the 2013 season was under way, however, Ryu was in high demand, and this was a no-brainer to include in the set. 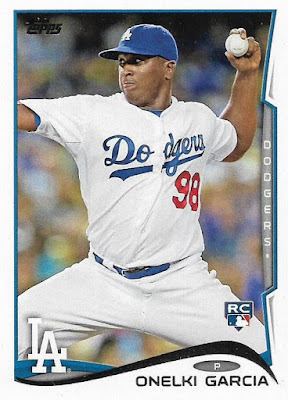 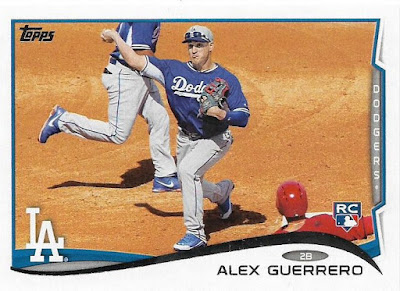 Onelki Garcia delivered a solid performance in Triple A in 2013, plus parts of 3 games in the majors. That was enough for Topps to include him in the set. However, Garcia didn't pitch in another major league game. This is a player who would have never received a Topps card 25 years ago.

It was a golden child trio for the first time in 2015. Joc Pederson had been mentioned for a long time and seemed like a natural fit even if he had played in just 14 games when the card was issued. He did appear in 151 games in 2015. 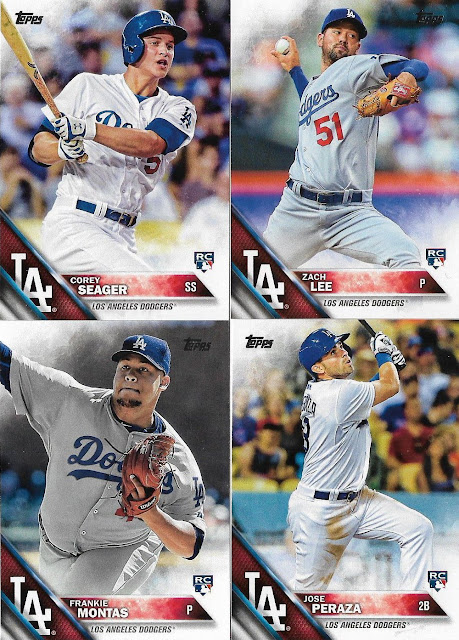 Wow. Good thing Corey Seager is there, right? The three other guys are no longer with the Dodgers. Jose Peraza was practically traded before his card showed up in packs.

Meanwhile, Zach Lee and Frankie Montas, as designated golden children, have appeared as Dodgers in probably a dozen different Topps sets. Lee has all of one game with the Dodgers to his credit and is now a Mariner. Montas has never pitched in the majors for the Dodgers. Not one official game. But at least I have 10 different cards of him as a Dodger! Wee!

The rookie card logo aside, the time has long past for including players like this in sets consisting of regular major leaguers, especially when some major league players are left out so we can pull guys who have six pinch-hit at-bats in September for their whole career.

A more thoughtful process for including players like this needs to be in place. Guys like Corey Seager and Hiroki Kuroda need to get into sets and I think if you're on top of the baseball news you know when someone is earmarked for a starting role heading into the season (like Seager) or signed out of Japan to be a starter in the rotation (like Kuroda).

Everything else is a complete crap shoot -- prospects with no guarantee of sticking in the majors. 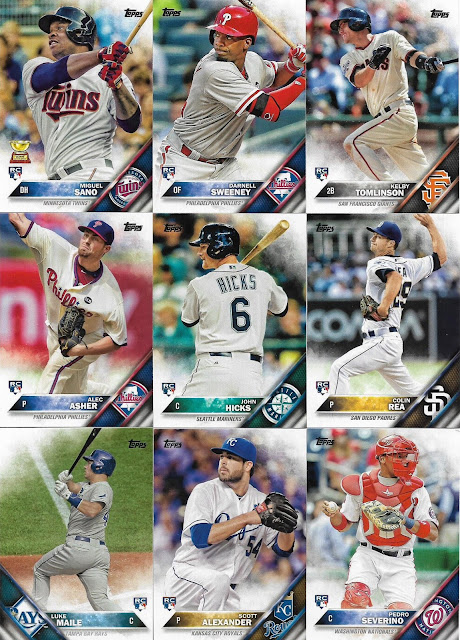 That's just about all of the rookie logo golden children that I've gathered from 2016 Topps. Some of these guys I'd say definitely deserved a card in the 2016 set. Others I'd say "no way."

I know there are people reading this saying, "I like to see guys like this. They may never get another card again. It's great that they have a card."

And my answer to that is: That's what Bowman is for.

If Topps never produced a card of Onelki Garcia, it wouldn't bother me for a second.

Billy Kingsley said…
My personal feeling is that everyone on the team should get a card in the flagship set, for every sport. And that they should retroactively issue cards using the design and paper stock for previous years for people who didn't get a card.
November 16, 2016 at 11:29 PM

Brett Alan said…
I completely agree. There are too many guys who are solid major leaguers but rarely get cards after they move past RC status. It's especially annoying when they change teams and get no cards with their new teams.

Also, why in the world are their limits on what info can be on the backs? Cards with the RC designation have limited stats and don't list hometowns or acquisition information, at least in the main Topps sets. Anyone know why?
November 16, 2016 at 11:30 PM

GCA said…
That's right. Bowman is for prospecting. Flagship is for significant players. I'm so over all the rookie saturation in every single current product for the last couple decades. Get rookies in every pack, short printed rookies, rookie swatches, rookie autographs, shiny rookies, rainbow colored rookies, parallel rookies, exclusive rookies. Uh, sorry. I'd rather have base cards of players who play, inserts, and retired veterans that have accomplished something. Sorry to buzzkill your hype, card companies.
November 17, 2016 at 9:48 AM

Fuji said…
I miss the days when a player's first pack pulled card was their rookie card... and if they had an earlier card from a traded/rookies set it was their xrc. A few days ago, I decided to track down a Jose Altuve rookie card for my collection, but ran across the issue of buying one of his Bowman cards... or his official Topps rookie card. It was annoying, so I ended up saving my decision for another day.
November 19, 2016 at 9:10 AM