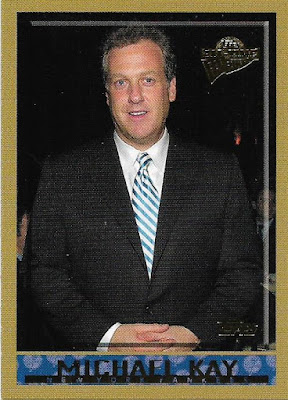 This is a continuation of yesterday's post concerning Topps' All-Time Fan Favorites sets from 2003-05. Check it out if you want to get up to speed.

While tackling the opposite end of the All-Time Fan Favorites spectrum -- the least favorite of the favorites -- I realized something:

If being well-liked is important to you, do not become a baseball broadcaster.

Looking for "least-liked" in a set of supposed favorites isn't the easiest thing to do, but the cards that jumped out at me as people who have been criticized a time or two were almost always announcers. People are willing to dismiss your travails or faults if you play on a baseball field, but you better damn well be Vin Scully or Ernie Harwell if you are broadcasting.

That was interesting to me.

So, anyway, these are the 10 least favored fan favorites from the set, the "what the heck is this guy doing in here" people in the set. The "honorable mention" picks that just missed the list include Michael Kay, Steve Lyons (both broadcasters) and Jim Leyritz (big HRs, but also one, big, self-serving personality). See if you object: 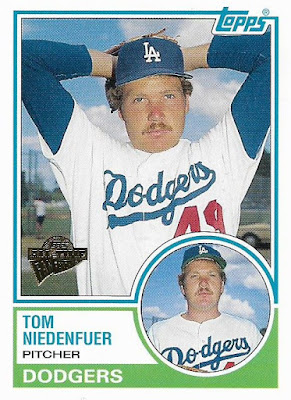 This was called by gcrl in the comments of the last post. I don't expect anyone but a Dodger fan to know why Tom Niedenfuer is here, but they should. Grooving a fastball for Jack Clark during the decisive game of the 1985 NLCS, two days after giving up a walk-off home run to Ozzie Smith, I won't say is unforgivable, but I will say, he ain't no fan favorite with me and hasn't been for any period he wore a Dodger uniform. Topps, my goodness, what were you thinking? 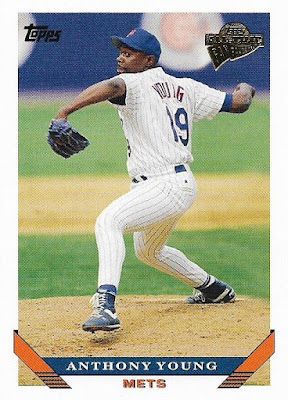 Anthony Young's claim to fame is losing 27 straight decisions with the Mets. His career mark in three years with the Mets was 5-35, it says so right there on back of this card. I understand that Young was good-natured about the whole thing and he makes for one heck of a SABR biography, but I can't imagine a single Mets fan saying Young was their favorite player during this period. And, if they did, well I guess that says something about Mets fans, or the team. 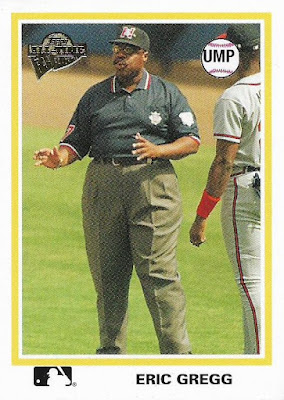 In general, I think putting an umpire in a "Fan Favorite" set is ridiculous. Umpires, by the nature of the job, have more critics than fans. But Eric Gregg? Author of the worst-called game in baseball playoff history (the Livan Hernandez fiasco in the 1997 NLCS)? No, no, no, no, no, no, no. Very successful manager. Would do himself a huge favor if he took himself and baseball a little less seriously maybe by 5 percent. 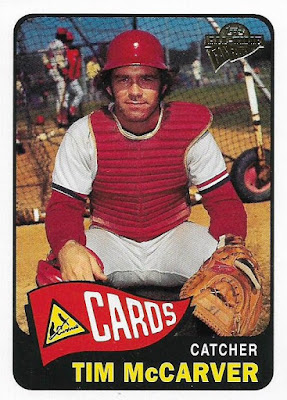 Here come the broadcasters. Tim McCarver, I'm guessing, made more appearances on the site Awful Announcing than any other baseball announcer in history. McCarver's downfall was using far too many words to state the obvious, causing irreparable harm to listeners' ears. It's too bad, because McCarver was a pretty good announcer way back in his Mets days in the '80s. And he did make some pretty terrific baseball cards. 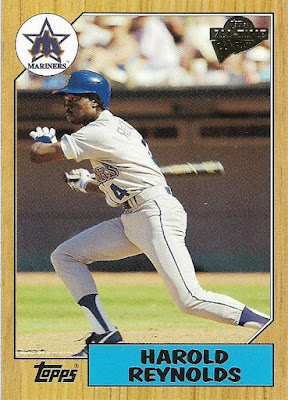 Good gosh, there are some times when I listen to Harold Reynolds speak that I wish that McCarver was back, and, oh, what a terrible thing to make someone wish. I don't know what Reynolds did to convince people that he could talk about baseball on TV. I get that he is enthusiastic and gregarious, but he is not smart about talking baseball. At all. The stuff that comes out of his mouth. Just shhhhhhh. 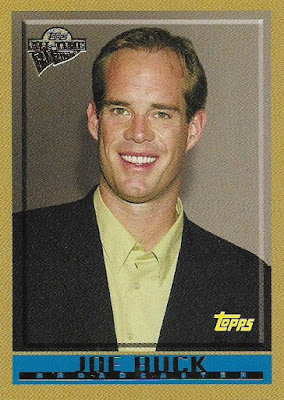 We're on quite a streak here, huh? I'll say one thing for McCarver and Reynolds -- at least they love baseball. I get no impression of that from Joe Buck. Just give him his giant paycheck. My least favorite part of Buck's announcing is that I think, from everything that I have learned about broadcasting over the years, is that he is the play-by-play guy. So, WHY IN GOD'S NAME IS HE SUPPLYING HIS OPINION ALL THE TIME? Next to him in the booth during the World Series was John Smoltz, who has become a wonderfully perceptive and communicative color man. But Buck could not be still because JOE BUCK KNOWS SOMETHING. 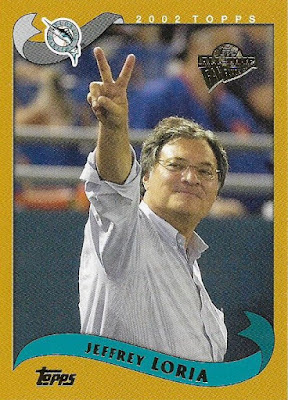 A very weird choice by Topps. Jeffrey Loria is despised by anyone who enjoyed the Montreal Expos. And I'm fairly certain that the way he's handled the Marlins over the years would have gotten him tarred-and-feathered with another team in another time. There was that World Series title, but good gosh, so much pain around it. 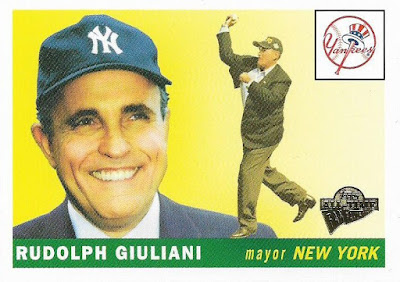 OK, I am really going to try to avoid getting political here. I'll just say that at the time that this card was issued and I pulled it, I thought "what on earth is a politician doing in this set?" There were extenuating circumstances with 9/11, of course. But now? You can find Rudolph Giuliani's detractors lined up around the country. This is why, Topps, you don't put present-day politicians in baseball card sets. 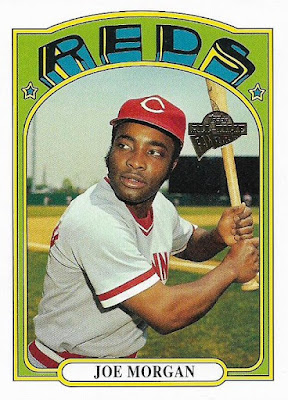 Terrific player, obnoxious announcer. I'm afraid his announcing overshadowed his playing days. Morgan's obstinate way of refusing to credit the current means of evaluating baseball talent -- means that have garnered certain teams World Series titles, by the way -- ticked off plenty of baseball fans. It was as if he came on TV every day and announced "the earth is flat" in the most stubborn way possible. Also, the way he cozied up to Barry Bonds and the Giants irked the hell out of me, but that may be just me.

Some of these, of course, belonged in the set. Morgan was a well-respected, Hall of Fame player before he even started announcing. You can say similar things about McCarver and Reynolds. And La Russa definitely had his fans in Chicago, Oakland and St. Louis.

But there are other choices I will never understand. I'm still looking forward to that Royals-Dodgers World Series that should have happened in '85.

I have one more Fan Favorites post in me that I'll feature soon.

Tony Burbs said…
Joe Morgan - he really gets under my skin with his stubbornness. This is especially so with his continued insistence on propagating the myth that the basket at Wrigley was called "Banks Boulevard" and it caught so many of Mr. Cub's home runs. First of all, the basket wasn't even there until Ernie was a shadow of his former self with only a couple years left and little power. Furthermore, the only documented evidence of the basket having that nickname comes from... you guessed it... Joe Morgan. Literally no one else on the planet has ever called it that. What the heck, Joe?

I'll admit to a soft spot for Anthony Young. I worked a few of his high school games and knew him at the University of Houston. A very nice kid. That record of his is pretty painful though.

Unknown said…
All these years I thought I was the only one that Thought Joe Morgan was a horrible announcer. I always got the vibe that he thought he was tremendous and no one else would ever come close to his talent level. Tim McCarver and Joe Buck was the worst duo. One that has his opinions about everything you never wanted to know and the other who thought his perspective and his brashness about other players lack of talent is something he needed to share every Saturday. I will let the New York residents past and present give their comments about Rudy. Overall I enjoyed this post and the last one as well.
November 23, 2016 at 8:36 PM

buckstorecards said…
Loria deserves all 10 spots. Maybe you fit Joe Buck into the 10th spot, but to call Loria a fan favorite with the Expos situation going on in 2004, and the stadium mess yet to come is mind-blowing.
November 23, 2016 at 8:59 PM

Teresa Whitesel Navarro said…
X-out ALL the cards with people wearing suits/street clothes. I understand the issues pointed out about announcers who played in the MLB, or umps, but I certainly have no place in my collection for Loria, Buck and Giuliani!
November 23, 2016 at 10:23 PM

Matthew Glidden said…
Harold Reynolds did indeed rate as a fan favorite in pre-competitive Seattle, but speaking as an M's kid from that 1980s era, there wasn't much to go with. We had Harold, Alvin Davis, and Septembers of "mathematically alive."
November 24, 2016 at 12:04 AM

BobWalkthePlank said…
I watch highlights from the Eric Gregg game at least once a year. The batters reactions in that game are priceless.