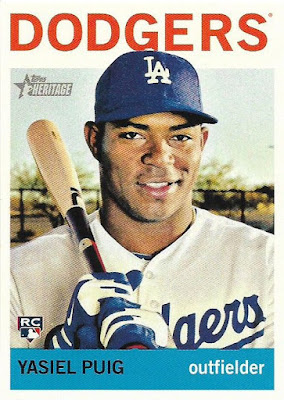 I am in a constant fight with myself over what to absorb into my brain. As a member of the media, I have always tried to gather as much information as I could for myself. You should have seen me in college. This was before the internet, but I had subscriptions to several different current events magazines, made daily visits to the library to consume even more information, and constantly monitored the TV news.

As I became more settled and the world seemed to get more alarming, I started to change my philosophy. Too much information wasn't good for my health. And I could see it wasn't good for others either.

That's never more apparent than it is now. And although "outta sight, outta mind" seems like a flippant excuse for sticking your head in the sand, it has served me well. I've gone back to that reminder again lately. I will focus on what I can see and affect where I live. My hope is others do the same, make the right decisions, and stop themselves from getting worked up over things that they can't control.

I had completely forgotten that the above Yasiel Puig card had existed. It was so out of my mind that when Steve of Collating Cards asked whether I needed it, I shrugged it off as something I had already. "2013 Heritage needs? Pssssh. Got that covered miles ago!"

But actually I needed the card, and the other Dodgers that came with it. 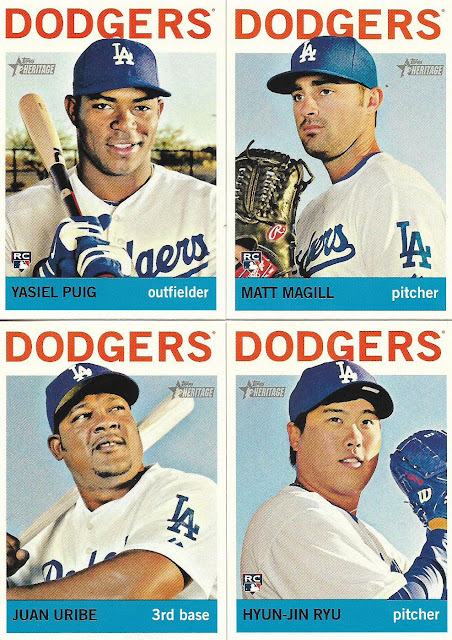 Suddenly, out of the recesses of my mind, these cards began to look familiar.

They are all from that nefarious buy-it-only-from-the-Topps-online-store-we-will-control-how-you-shop-for-cards boxed high numbers set! For a three-year period, Topps issued a Heritage High Numbers set that wasn't available in your usual stores. I'm gathering that this kind of "packaging" didn't succeed because Heritage High Numbers has returned to the big boxes as is our constitutional right the last two years.

I had been so infuriated by the first version of the online-only Heritage High Numbers set back in 2012 that I eventually chose to ignore future versions -- mostly to avoid giving myself a coronary -- and was so successful at it that I had forgotten the cards even existed.

That's how "outta mind, outta sight" can help save a lot of angst in your collection.

I continue to do this with the online exclusives -- Topps' Throwback cards and the ToppsNow offerings. Sure, they're real cards, but if I tell myself they're not real, not worthy of my collection (at least not at the price being offered), then I'm not plagued by the "I've gotta get those" demons and I sleep well at night.

Now, let's see some cards Steve sent that I am all too aware of and must get in my collection. 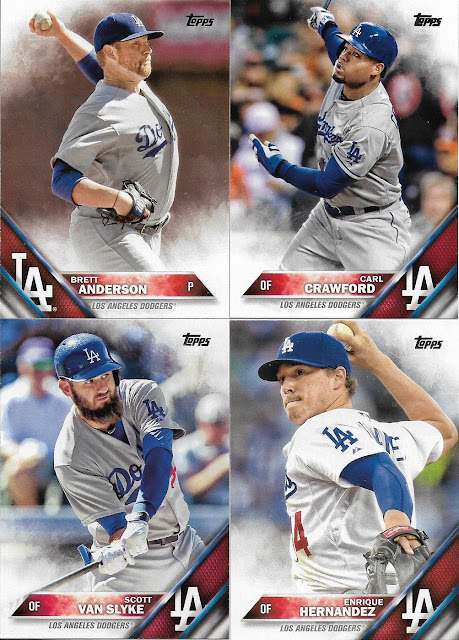 Necessary evils. 2016 Series 2 cards of Dodgers who barely make a dent in the lineup. I get the feeling that there are Series 2 cards piling up in the warehouse at rates not seen since Donruss existed in the early '90s. Anybody buy Series 2 and willing to admit it? 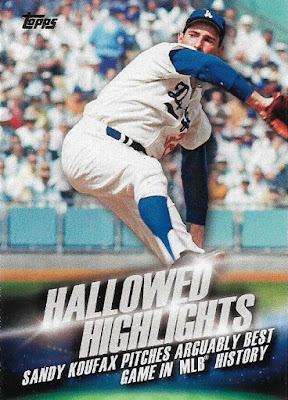 Plus one insert. Please note that in the 1960s, there was no smoke on the field. It made for more enjoyable photos. 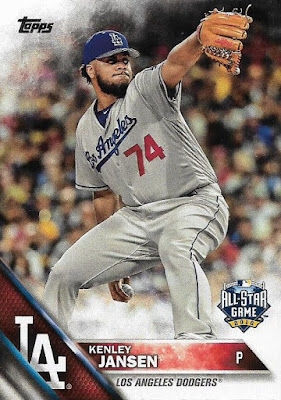 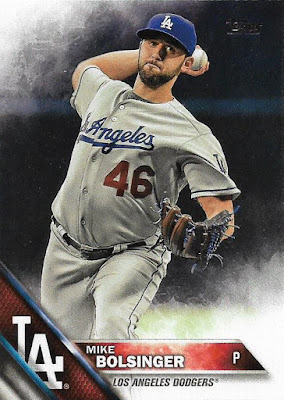 Back to smoke. These are a couple of Update needs. Timing is important in issuing Update sets. Mike Bolsinger turned out to be less a factor for the Dodgers than Andrew Toles. But we don't have a Toles card because deadlines are a thing. 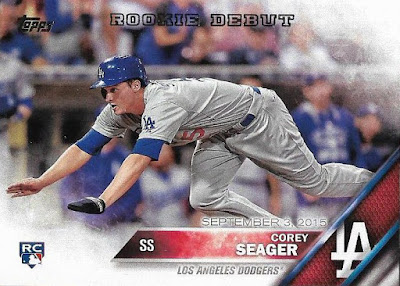 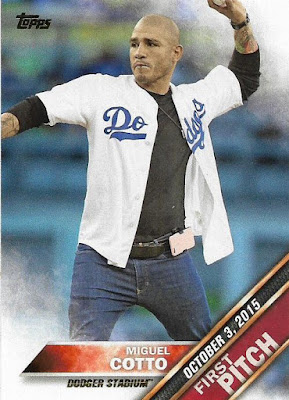 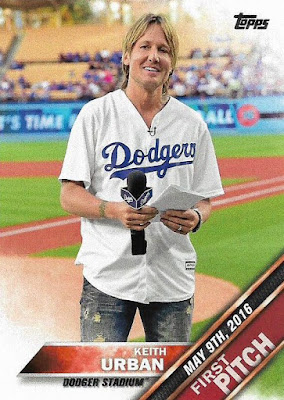 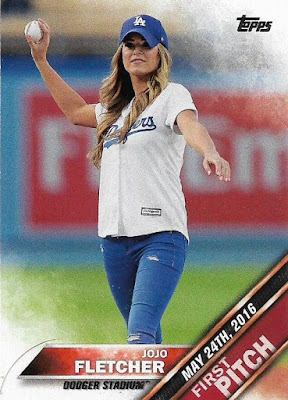 Steve also sent the last three Dodgers First Pitch inserts that I needed. As is the case with many of these cards, I have to look up who the heck is throwing out the pitch. Keith Urban I knew because I share my neighborhood with a lot of cows. The other two I had to look up.

Here are all the Dodgers First Pitch cards this year: 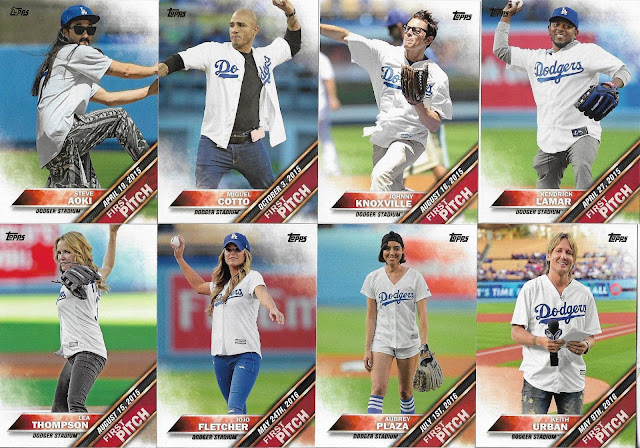 That's a lot to collect for one team. Twins collectors don't have this problem.

Steve contributed three more Archives' '79s for my quest. I'm down to needing six or so more cards from this. After that I'll stare and sulk at those super-shortprint numbers that I need. Right now they're outta sight, outta mind. 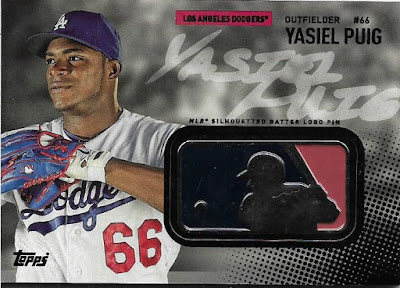 I'll end the post where I started with another Puig item that wasn't in my brain.

It's a super-thick, manu-relic card from 2015 that looks quite handsome. It's well-designed and the MLB logo is some sort of embedded pin. Had I known this existed, I might have driven my brain crazy trying to get it.

I appreciate the cards Steve sent, and I appreciate those who are concerned with world problems and equipped to handle all the weighty issues that go along with it. But for many of us, simply concentrating on what's around us and less agonizing over what's happening way out there, will be more productive. For you, for your community.

A narrower focus on the collection is healthier, too.

Plus it's a nice surprise when you get a card you've completely forgotten.

SpastikMooss said…
I had no idea that both Kendrick Lamar and Aubrey Plaza appeared on baseball cards. I may need to make a purchase.
November 13, 2016 at 8:22 PM

Tony Burbs said…
I've been employing that strategy for a few days now myself.

I'd forgotten about the online only nature of HHN already; thank goodness Topps corrected that scourge of an idea.
November 13, 2016 at 9:35 PM

GCA said…
I do the same thing for my player collections...ignore each year's Topps Tribute, Triple Threads, Bowman anything, Five Star, Museum Collection, Tier One, etc. until I find them on a dealer table at a show for a buck or less each. No other practical way to get those singles anyway....
November 14, 2016 at 8:55 AM

Fuji said…
Look, it's another beautiful female Dodger fan! As a Padres fan... I'm already envious of all of the star power you guys have on your roster. You guys get the hot women too? It feels like high school all over again. :)
November 15, 2016 at 12:44 AM