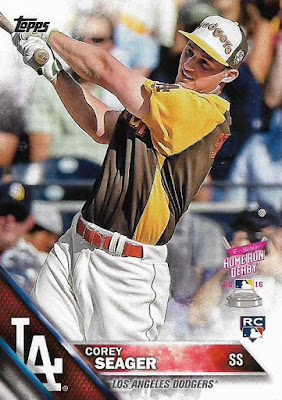 If you pay attention to what is written on social media, particularly on Twitter, you have probably heard how lousy 2016 has been.

Any time a celebrity dies, or the election becomes more sordid, or a tragedy befalls people somewhere in the world, there is the inevitable, "oh, f-you, 2016" lament.

I think this sentiment has arisen because the world has shrunk so much, even in the last five years. We are fed information from everywhere at a rapid clip. It's not like 1983 anymore when we'd wait until the evening news or morning newspaper to be informed of the day's happenings and in between focus on what was in front of our faces. We're battered with information constantly and with stuff we'd never know 20 years ago, and we actually move things we have no control over higher on our priority list because of it. Of course we think 2016 is a wreck! It's all we see, because we won't turn it off!

Personally, my 2016 hasn't been that terrible. Oh, there are some things I'd like to change, but a lot of pleasant and semi-pleasant happenings have occurred in the last year, and I get a little annoyed when I read people dumping on 2016 again. It really hasn't been that bad if I don't refresh Yahoo News every 15 minutes.

I'd say the only place where the lousiness of 2016 has had any kind of major impact on my life is with baseball cards. Yes, baseball cards. Many of them have been kind of brutal this year and yet I keep forcing them into my collection.

Take the card shown above, for example. I received that and several other 2016 Update needs from Mark Hoyle recently. The card contains many features that I do not like about current cards -- the TV graphic design, the haziness clouding the photo, the filtered look of the picture, the corporate sponsorship, and the awful team-centric all-star jerseys and caps.

I see that and I can't wait to boot 2016 into the stratosphere.

So let's see some more 2016 Update to get me into an indignant rage. 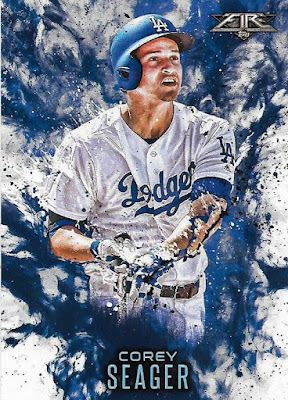 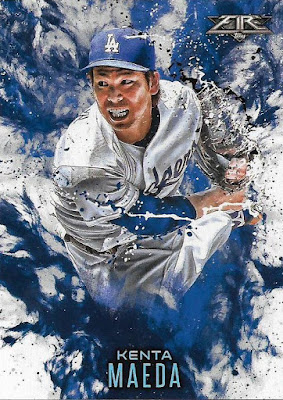 These "Fire" insert cards are ... weird.

I suppose if you're into super-arty cards, they're up your alley. It looks like the players were sucked into a Jackson Pollock painting. I'm a little more concerned that Corey Seager's hands have disintegrated. 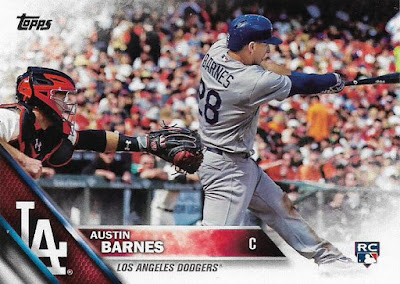 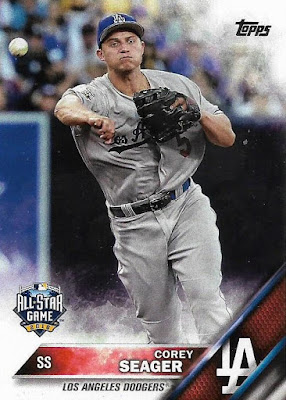 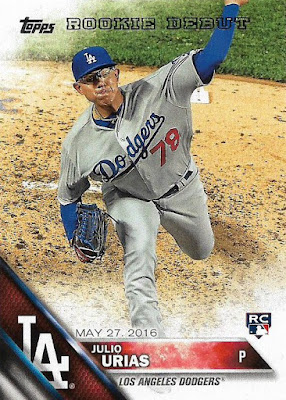 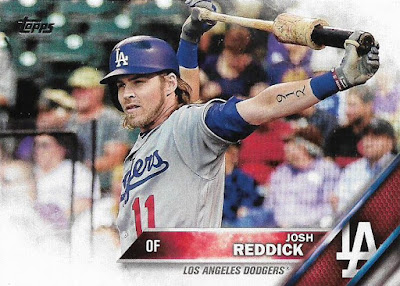 More smoky photos as I quickly tick off the Update cards I am required to jam into my collection. I'm getting very close to not having to show any more 2016 cards on this blog (I know of at least 1 or 2 more times I have to bore you with them). That's a nice goal to have. 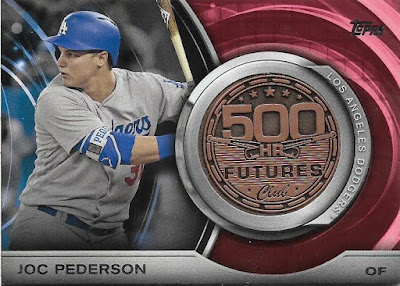 Mark asked me if I wanted this item before he sent it to me. I almost started my reply email with "'Want' is a funny thing, Mark ..." But I wisely didn't. Instead it was more like, "Just go ahead and send it to the hopelessly addicted Dodger fan."

This is a 500 Futures Medallion card that I believe shows up in retail blasters. It's super-thick with some sort of bronze/copper coin-looking crafting. As usual with cards like this, I want to take it apart and see what is inside. But I won't do it with this card. If I'm really curious, I'll buy a blaster myself and cut up the inevitable Rockies medallion that I will receive.

So those cards get me a little closer to saying good day to 2016 forever.

As for what I mentioned earlier, I'm not suggesting that you don't do your part to help make the world a better place. I try to do what I can. But focusing a little more on what you can do close to home and on the good that exists close to home, while also counting your blessings, may put you in a better place. It will help you counter the online drumbeat of "GUESS WHAT HAPPENED IN THAT PLACE YOU'VE NEVER HEARD OF TO THAT PERSON YOU'VE FORGOTTEN ALL ABOUT UNTIL NOW."

Get caught up in that too much and you'll wish away every last year until you die.

Billy Kingsley said…
2016 hasn't been too bad. If I didn't lose a family member I really liked to cancer I would say it was pretty good actually.

That Joc Pederson "500 Futures" medallion is humorous. Have they used anything to come up with their list of people for that other than, "hey, this guy hit homers last year!"
November 7, 2016 at 7:34 AM

BobWalkthePlank said…
The All Star cards never bothered me. If they ever go away I'm going to send you links on how bad 2016 was because of the death of Update All Star cards.
November 7, 2016 at 7:46 AM

Johnnys Trading Spot said…
Thats it dammit, everyone close those social media accounts and drop your cable/sat. No cheating with netflix or hulu either. Heck while we're at it, dump our smartphones. I think the world would be better. You know......sometimes you just need to SMILE.
November 7, 2016 at 6:09 PM