November 18, 2016
This hasn't been the best week for my love affair with blogging. In fact, if I were the type to take a week off from blogging just because I wasn't feeling it, this would be the week.

But you know me, I press on. Because a writer writes. We're weird like that.

I've been procrastinating on the promised Pedro post because I didn't feel like writing about any of the Pedros up for vote. I've already done a bunch of posts about Pedro Martinez, the player who got the most votes in "Vote for Your Favorite Pedro". And I've done several on the the runner-up, Pedro Guerrero.

Here is the final vote tally:

So, there you have it. Martinez is our new ruler. I think it will be fun.

My first act under his new rule is to show all of the Pedro Guerreros I have. That's right, Guerreros. Although Pedro Martinez may have gotten the most votes and be one of my favorite players, Guerrero strikes at the heart of my formative years. He is the player I latched onto as I began really paying attention to baseball, up-and-coming rookies and the World Series.

Guerrero was the guy who burst on the scene with his 5-RBI performance in the decisive Game 6 of the 1981 World Series against the Yankees. I couldn't have loved a player more at that particular point.

So, stealing a series from Wrigley Wax, here are all the Pedro Guerreros I have (Dodgers only): 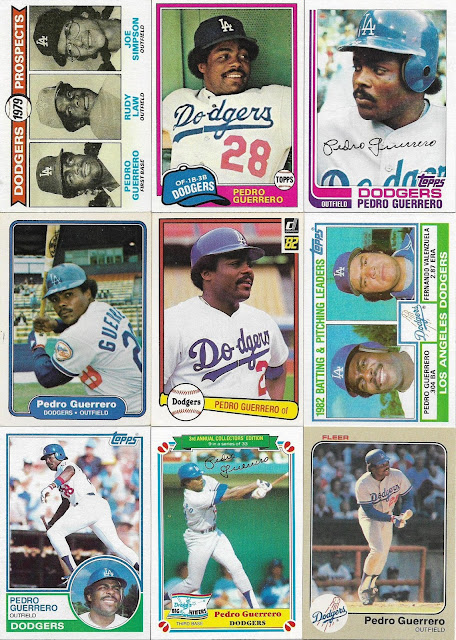 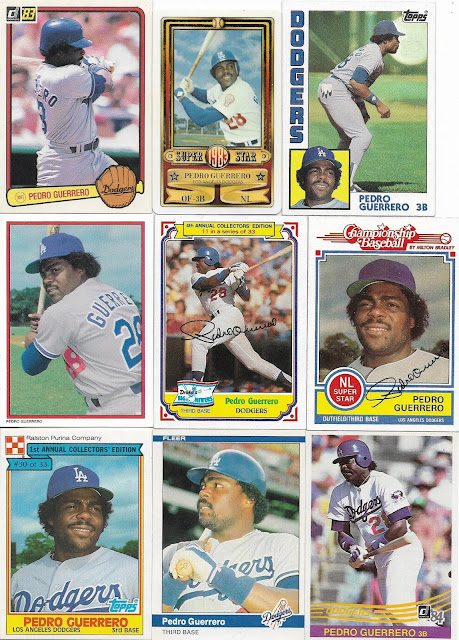 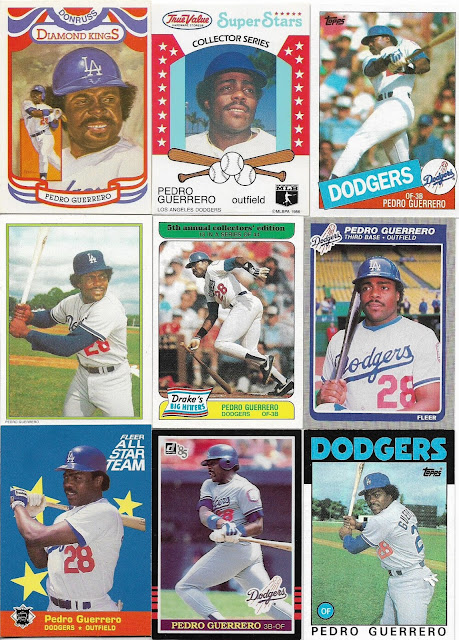 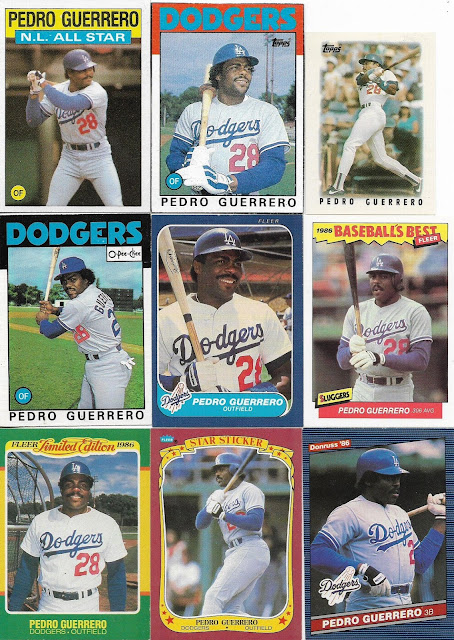 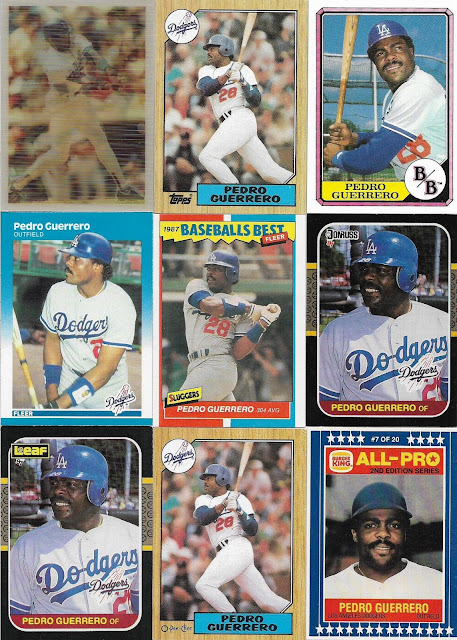 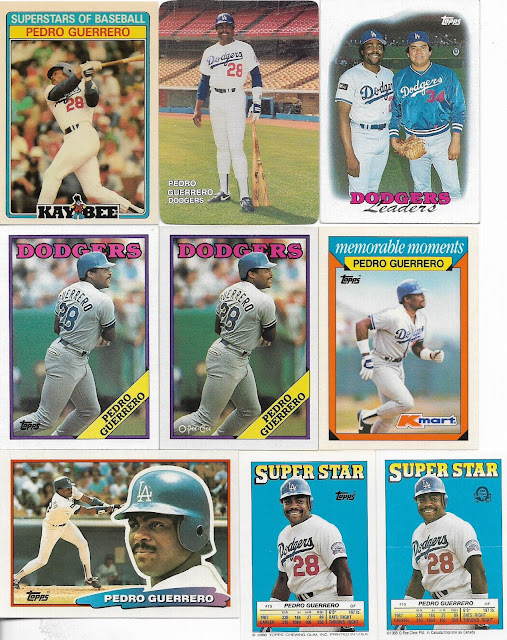 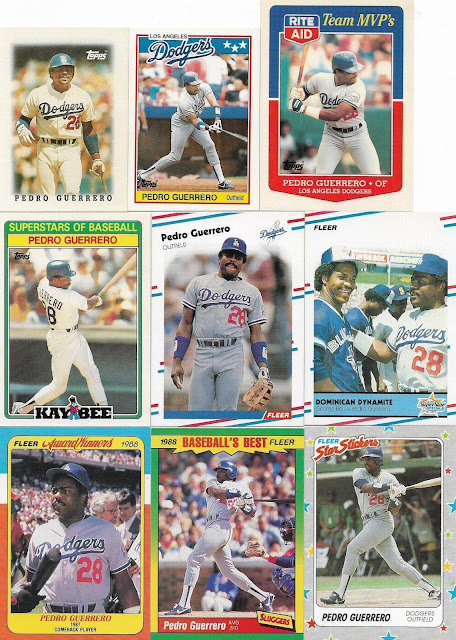 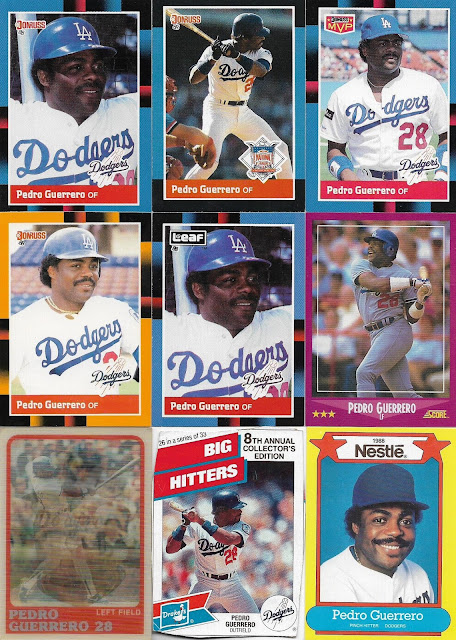 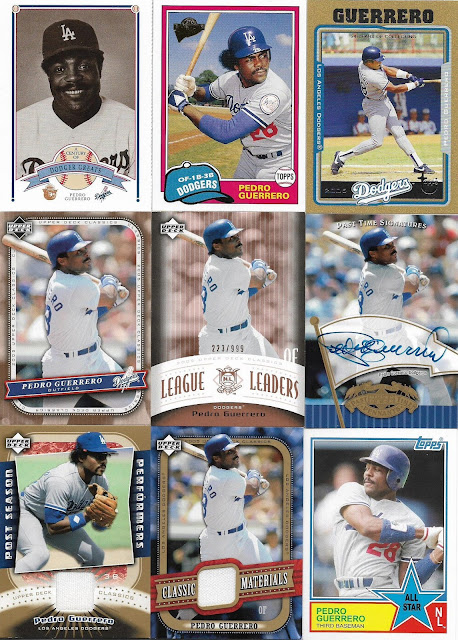 (Nice job, Upper Deck using the same damn photo over and over).

This has been a productive activity because I noticed a few Guerrero cards that I should have had by now, and they have already been ordered up.

I also have a few stickers and tiny cards: 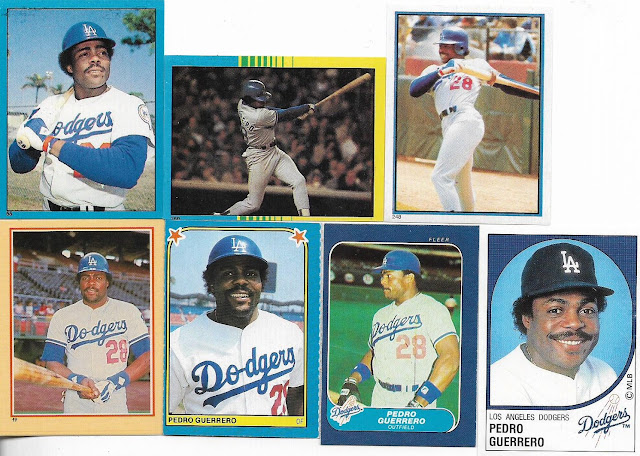 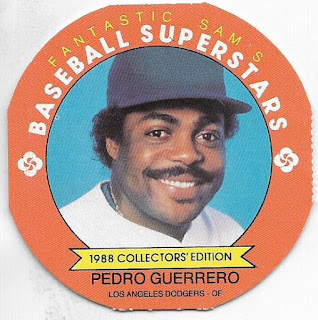 Guerrero arrived right in the '80s sweet spot of food-issue oddballs, which makes for some exceedingly great cards.

Mike Matson said…
I admit the main reason I picked Pedro Martinez is the fact he was an Expo..

Fuji said…
I knew there were a lot of oddball issues produced in the 80's... but seeing Guerrero in so many of them really puts things into perspective.
November 20, 2016 at 12:51 AM