The most favored fan favorites 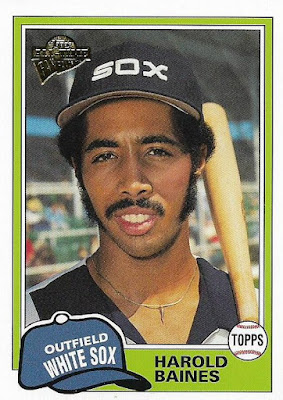 My obsession with Topps' All-Time Fan Favorites sets, circa 2003-05, continues. I have completed two of the three sets and finally, yesterday, I put up a want list for the 2003 set. Turns out I need just 11 cards to complete it. That shouldn't be too difficult.

While I was researching which cards I needed, a thought came to me: which of these players are the biggest fan favorites of all? There were obviously players with more devoted fans than others. For example, Nolan Ryan was/is a bigger favorite than Darrell Evans and both players appeared in Fan Favorites.

So I decided to put together a top 10 list of my perception of the most favored fan favorites. This is based on what I see here on the blogs and other online sites, in my interactions with baseball, and my experience over the years. It's by no means the most accurate, this is merely my perception.

I eliminated any Dodgers from consideration. As a Dodgers fan, it's difficult to get outside of my own fandom for specific Dodgers and compare it with the fandom of other teams' players. Part of this exercise is my puzzlement with the enthusiasm that fans have for certain players. I have no puzzlement whatsoever for fans of Dodgers players.

Before I list my top 10, I want to mention some honorable mentions. This was a pretty difficult list to make and there are many players in these sets who would make the top 10 if someone else made the list. So here are the honorable mentions: 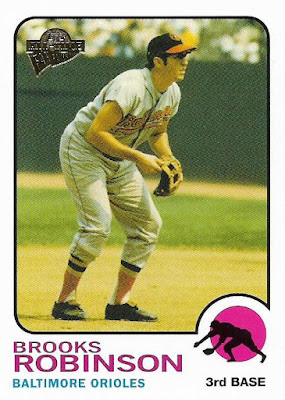 As a kid just getting to know baseball as Brooks Robinson was ending his career, I heard a lot about Robinson's legend. There didn't seem to be any other Oriole who could compare to what Brooksie did in the eyes of Orioles fans. 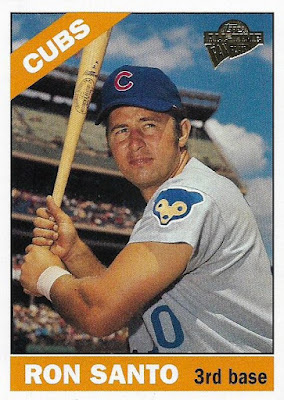 Cubs fans are a vocal lot. Ron Santo was before my time. But I've certainly become familiar with how much he meant to Cubs fans who rooted for the team in the 1960s. 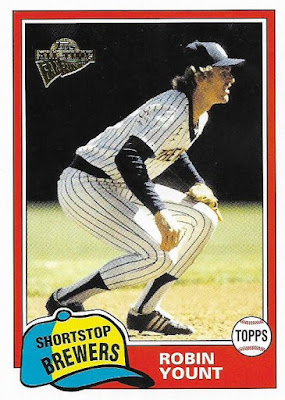 The most effective way to become an ultimate fan favorite is to play your entire career for one team. Robin Yount certainly did this better than most. Twenty years with the same team. Imagine if he could have played into his 40s. 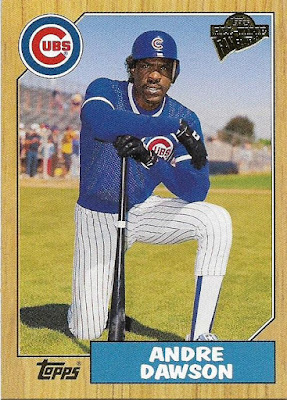 Andre Dawson had the benefit of playing for two devoted fan bases (three if you include the Red Sox) -- the Expos and the Cubs. Plus he has the nostalgia factor of the Expos going for him. One of the untouchables for fans who grew up in the 1980s, who seem to dominate the online world. 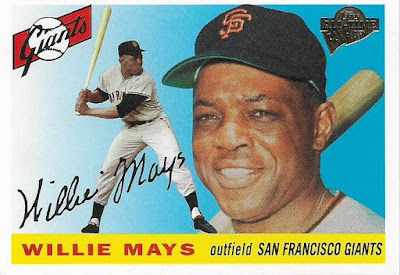 It's difficult for me to gauge fandom of players from the 1950s. It's the reason Stan Musial isn't on this list. I just don't sense the fervor. But Mays lasted into the 1970s, and he was revered when I was growing up with baseball. He's also been the beneficiary of a couple of documentaries that featured his game. 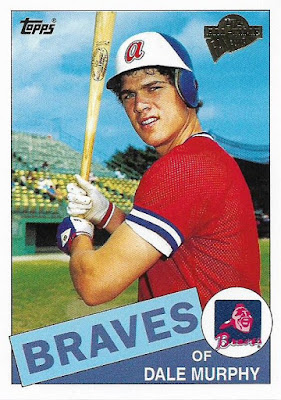 I can't say I will ever fully understand the enthusiasm for Dale Murphy. I guess you have to be a Braves fan who experienced the awful Braves teams of the '70s. Murphy's back-to-back MVP awards signaled the rise of the Atlanta franchise through the early '80s. Murphy's always been a nice guy. That certainly helps. 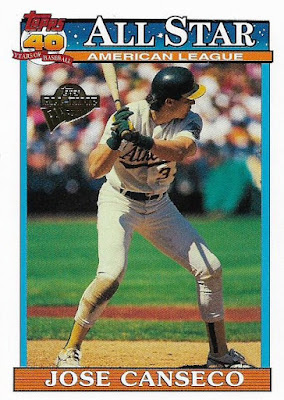 Before blogging, I had no concept of the enthusiasm for Jose Canseco. I came from a different generation where his kind of brashness was to be criticized, not savored. But it became clear that a new kind of slugger intrigued baseball youngsters in the late '80s. And during my first couple of years of blogging, I probably saw more enthusiasm for collecting Canseco cards than any other player. 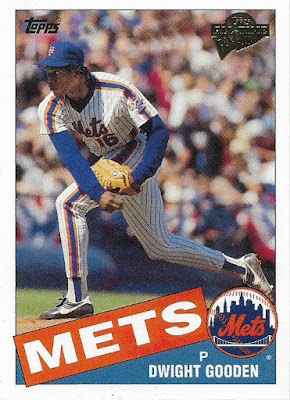 Dwight Gooden's otherwordly ability from the outset created legions of fans who remain devoted to Doc to this day even with all of his current troubles. I probably respect Gooden fandom more than any player on this list, save for one. 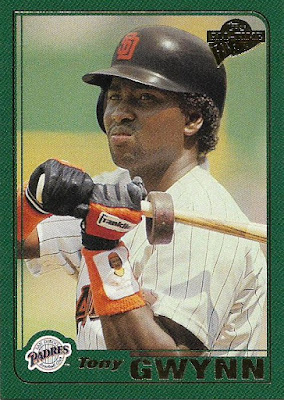 There are three players who will ensure that I will own just the cards of them that complete a set: Greg Maddux, Frank Thomas, and definitely Tony Gwynn. If I have any Gwynn extras, they will end up with an abundance of Gwynn collectors that I know. Gwynn is an exceedingly rare breed, someone who played for the Padres for at least a decade -- does anyone else like that exist? This is why he is so popular. 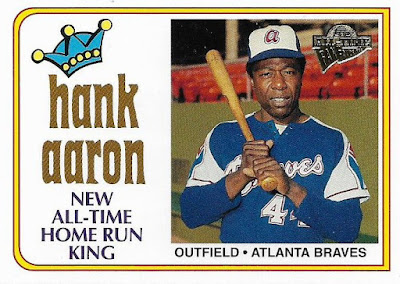 There are several notable fan favorites who would have been on the list except they didn't have cards in this set: Mickey Mantle, Roberto Clemente, Willie Stargell to name a few.

Of course, none of these are my fan favorites. None of them (Canseco doesn't count) played for the Dodgers.

(Up next: the least favored fan favorites).

Unknown said…
Hey this is a fantastic Top 10 you came up with. Brooks Robinson was the best. Thanks for including Dale Murphy, not as a Braves fan but he is a top notch classy athlete.
November 22, 2016 at 8:31 PM

Metallattorney said…
I loved those sets. I actually completed the 2003 set long ago, purely through opening packs. Unfortunately I have likely traded everything off.
November 23, 2016 at 12:25 AM

Anonymous said…
I thinks your enthusiasm for Murph is deeply dampened by his HR's against your Dodgers. During his career (1976-1993), he smacked more homers against 'em than anybody else. If you expand the dates to the last 25 years of the 20th century, he still leads the pack. A fat part of that was done at Dodger stadium itself. In fact, he's 3rd all-time in HR's at Dodger stadium among visitors, trailing only George Foster and Barry Bonds. Yeah, it makes sense why you lack a lil' Murphy love.
November 23, 2016 at 5:40 AM

Daniel Wilson said…
Great list! I don't think I've ever announced it on my blog, but I'm a Hank Aaron collector of sorts. I'm trying to get all his base Topps cards from his playing days.
November 23, 2016 at 7:44 AM

Fuji said…
I totally agree with Gwynn at #2. As a Padres/Gwynn collector, I'm always being fed duplicates and it's never a problem finding them a new home.
November 23, 2016 at 9:57 AM

GCA said…
Ah, OK, so who wants this stack of Gwynns I pulled for someone that didn't end up taking them? There's junk wax base all the way through later 90's inserts? email at QAPLAGCA at yahoo dot com.
November 23, 2016 at 11:19 AM

Commishbob said…
Neat idea for a post! I'm not familiar with those sets but they sound cool. I'd put Brooksie at #1 but that's my orange and black soul talking. I am puzzled by Jose Canseco's popularity...then again I've been puzzled by a few other folks' popularity recently.
November 23, 2016 at 11:40 AM

defgav said…
I have so much junk-era Gwynn dupes that I will usually throw in one with all of my eBay card sales. Also one Benito Santiago card. And two other non-Padres cards just so I don't overload the buyer with Padres.
November 23, 2016 at 4:57 PM

AdamE said…
I think your data is slanted but all the bloggers who's favorites are the Braves. There is no way Murphy is more collected than Ryan. Is there not a Rickey Henderson Fan Favorite card? He would be right there at the top too I think.
November 23, 2016 at 8:53 PM

night owl said…
There is no Henderson Fan Favorite because Henderson was still active when the Fan Favorites sets were released.
November 23, 2016 at 9:03 PM