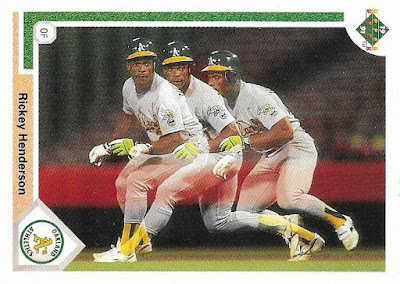 There is a discount store on the other side of town that has been the topic of at least a dozen posts here, going way back to the first few months of the blog.

The card offerings at the store, an Upstate New York chain called Real Deals, have never been as good as they were when I first posted about it. Back then you could find random offerings of early-to-mid 1980s Fleer mixed in with a stray 1990s Pacific card, and, of course, the usual junk wax.

But the store is worth checking out periodically. Sometimes there are no cards at all. Sometimes someone has just opened a box of 1990 Fleer and a box of 1988 Score. You just never know. Nobody's getting anything they can display on a mantel here, but the potential for a fun rip is always there.

The last time I was interested in the cards offered there is when my wife brought home a few packs of 1988 and 1989 Donruss. I'm the last collector on earth that enjoys opening a pack of that stuff, and as long as it was sitting on a store shelf in the back of the toy aisle, I was always a potential customer.

My most recent visit, though, those junk wax packs were gone. I scanned the aisle for any sign of old baseball cards nobody would want. I found some.

I have less than zero interest in '91 Upper Deck. I know I shouldn't be that way. But I can't get myself to care. It's nondescript to me, too much like the other UD sets from that time. It's boring.

So, sadly, I walked out. I hoped I wouldn't have to wait for all those '91 UD containers to be purchased before some other kind of cardboard appeared. I knew I wouldn't go back for a few months and I haven't.

But just now I came across the 1991 Upper Deck Rickey Henderson card. It's always been pretty cool. It's a night card of course, and I've always liked Rickey. The time lapse photos that UD did at the time I cannot lie were definitely not boring.

And now this makes me want to go back and see if any of those containers are still there (of course, they're still there, everyone who's ever wanted to complete that set and some who haven't have already done so).