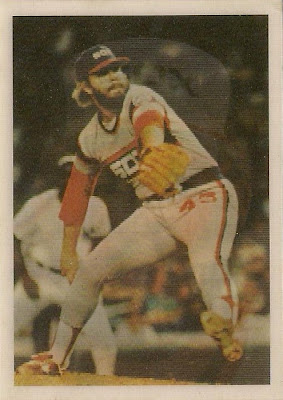 Like any collection, things can get a little stale if you don't mix it up a little bit. I like my Night Card Binder to have as much variety as possible.

Unlike most sets in which you collect one card of each number in the set, or even in the majority of frankensets, the Night Card Binder features a wide and disparate accumulation of cards. The only attributes they have in common are that they feature baseball players and have a number on the back. ... Oh, and the picture features a game played at night.

So, it is with great pleasure that I add my first Sportflics night card to the binder!

This card came from Bo at Baseball Cards Come to Life, I believe. He's a key supplier of night cards.

It's a card of White Sox reliever Bob James, who enjoyed his crowning season in 1985. He saved 32 games in 69 appearances with a 2.13 ERA. It was all uphill to get to that point and downhill from there. Why James was in the majors as early as 1978 and didn't get his first card until 1984!

(Fake bonus points to the person who can identify the Yankee in the photo. It could be either Willie Randolph, Ken Griffey, Rickey Henderson, Dave Winfield, Don Baylor, Billy Sample, Andre Robertson, Omar Moreno, Juan Bonilla or Juan Espino).

Sportflics were certainly unique for their time, although my first view of them was that they were some sort of rip-off of Kellogg's 3-D cards, since both featured lenticular technology. When I tilted them to reveal three separate images, that was kind of cool. But as a college boy at the time, it took much bigger waves to float my boat.

However, I may be on to something.

The above scan was scanned vertically (the card, not me).

I will put it side-by-side next to the horizontally-scanned James card. 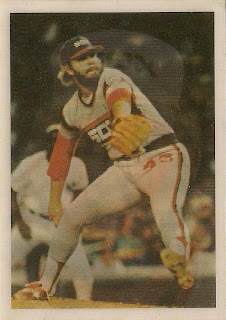 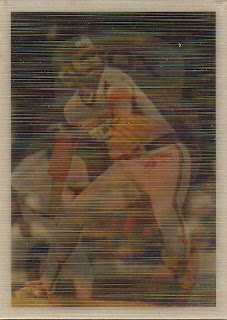 Yeah, I don't know if that means anything or not.

I suppose if I could find a way to create a scan that produced each of the three separate Sportflics images, then I'd have something to ooh and aah over, like little kids did in 1986 over Sportflics.

At any rate, welcome to the binder, Sportflics.

Cardboard Jones said…
The scan came out interesting; there appears to be some sort of apparition in the background. Kinda creepy!
September 1, 2012 at 11:27 PM