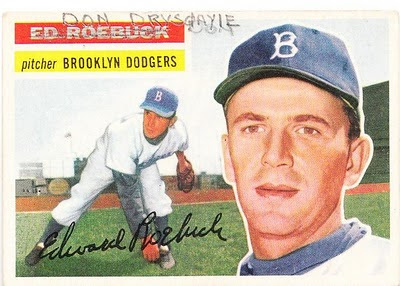 I came home from work after another crazy fall Friday night and, as I do every night, hopped on the internets to unwind.

It didn't work this time. About one minute into bliss, I learned that Chris Stufflestreet, owner of the Vintage Sportscards blog and the 1973 Topps Photography blog, had died from a heart attack earlier this week, at the age of 39.

I didn't know Chris as well as some others in the hobby. He was active on the Old Baseball Cards site and many other vintage sites long before I ever created this blog. He was a regular in those circles, known by other vintage collectors, by people on the Net54 forum, who would see him at The National every year. Chris had other card sites, including the very informative Vintage Baseball Cards, which spawned his Vintage Sportscards blog in 2010.

Collectors and non-collectors would write to him looking for answers about old cards. He knew and wrote about vintage cards that I never knew existed. T204 Ramly, 1933 Tattoo Orbit. He was seven years younger than me, but his card knowledge absolutely dwarfed mine. Daresay it dwarfed the knowledge of almost every collector.

The last I knew, he was working on publishing a hobby booklet, basically a primer for collectors. It included an in-depth history of collecting and card issues, how-to's in collecting, everything about the hobby. From Goudey to binders to grading.

About a year-and-a-half ago, Chris asked me to edit his booklet draft. He had learned of my newspaper background shortly after he had started his two baseball card blogs and had come across Night Owl Cards. That was also when we learned that we had another connection besides writing a blog about baseball cards.

Back in the spring of 2010, he sent an email to me. He had a Dodger card to send me. The email arrived under the heading, "I have a Dodger Card I really don't need." 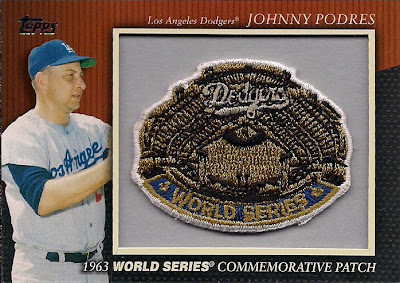 This was the "card." That's another thing we had in common -- a "whazziz?" aversion to modern card inventions like manupatches.

But that's not the connection to which I was referring.

Chris asked for my address so he could send the card. I sent him a return email and my address apparently got his attention.

"Holy crap, Watertown!!!" he said in response. "I grew up in Carthage. Graduated high school there in '90."

Carthage is a town about a dozen miles down Route 3 from where I live. From that point, Chris and I shared  our mutual knowledge of the area. He referred to himself as a "refugee from the north country." He sent a couple of cards to me that he had in his collection from back when he was a kid in Carthage (he had since moved to Florida). "They're used to the cold," he said.

Chris once worked at The Square Lion, a collectibles shop in downtown Watertown, which is where I began my return to collecting, visiting the old-style store every Wednesday to sift through a large box of 1975 Topps commons in a bid to complete the first set I ever collected.

He would mention card shows he went to in the north country and I'd keep him updated on the status of collecting in the area (the only show that still exists from when Chris was there is in Clayton every July. Chris used to work that show). 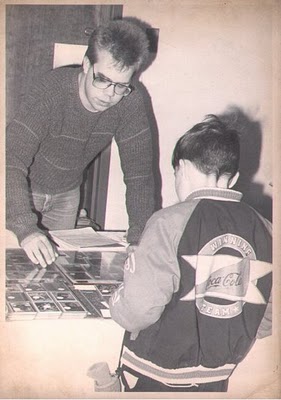 Here is a picture of Chris from back in the day, which he's featured on his blog a couple of times. It's a newspaper photo showing him working a show in the cafeteria of a since-defunct Catholic school in Carthage. He has a binder open to some late 1980's Tony Gwynn cards.

The photo was taken on December 2, 1989, which happened to be Chris' 17th birthday. It appeared in the Carthage Republican-Tribune, a weekly newspaper that still exists and is currently owned by the paper that I work for, the Watertown Daily Times.

When Chris learned that I worked for the Times, we commiserated about that paper a little bit. Here is a photo that was taken by the paper of another card show. He showed this on his blog, too: 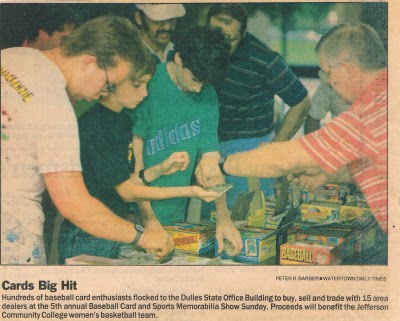 This photo also was taken in 1989, about five years before I moved to Watertown, but I know the photographer and the Dulles State Office Building and have covered the Jefferson Community College women's basketball team.

Chris is the eager collector on the left.

Chris regularly worked shows in the north country until 1992. He hadn't lived in the area for a long time, and virtually all of the shows have disappeared. Chris, like the rest of us, was forced to turn to the internet to reconnect with enthusiastic collectors. Collectors as enthusiastic as Chris.

Chris was trying to reach out to more collectors with the hobby booklet. I gladly agreed to look through the draft. It took me about two months to do -- just because I never have time for anything -- but I finally completed the task, he thanked me, and told me that he hoped to have it published by the summer of that year.

I didn't hear anything about it after that for awhile. But last spring he mentioned again that he was hoping to start an imprint (a publishing term for a brand name under which several books are printed). He again mentioned the hobby booklet and hoped it would be out in the summertime.

I know Chris was dealing with some difficulties in his family, but he never seemed to let it affect his interest in the hobby or the jovial way he used to point out in the comments when I goofed up. We had another thing in common. We operated several blogs and errors are just bound to happen operating that many blogs.

The connections just kept on coming. We both loved '70s music. We both had teenage daughters.

Yet there was one thing that we didn't have in common -- and I'm not talking about the fact that he was a Yankees fan.

Although we each loved vintage cards -- the more vintagier the better for Chris -- we didn't share the same thoughts on card condition. I admired Chris' devil-may-care attitude about condition. He picked up and displayed plenty of tortured cardboard that he had no problems adding to his collection. It was his ticket to owning some fantastic old cards. Who cares if they were creased in 47 different directions, displayed stains, or were missing a quarter of the card?

Unfortunately, I cared. I still do.

I'm not a grading freak or super obsessed, but if I'm going to buy a 1956 Topps card, it's got to be in relatively decent shape.

Which brings me to a card Chris sent me, the '56 Ed Roebuck card that you saw at the top of the post.

This card is quite comical, that someone wanted a card of Don Drysdale so badly (Drysdale didn't appear on a Topps card until 1957) that he thought crossing out Ed Roebuck's name would be sufficient.

But here I was, a collector attempting to finish off the '56 Topps Dodgers set, who didn't know if he would ever get a better-conditioned Ed Roebuck card, staring at scribbles on the Roebuck/Drysdale card. My own interests won out over the laugh factor.

I did my own bit of improvising. This is what the card looks like now: 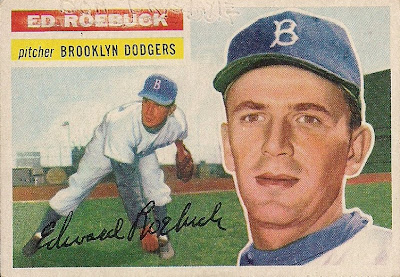 For some reason, this card makes me feel better. I wish I could be like Chris and be happy with the cardboard exactly as it exists. I'll always look up to him for that.

Chris sent me several other items over the last couple of years. He completed my 1983 Donruss Dodgers set for me. He sent a 1975 Topps mini, which is the greatest card treat anyone can send me. He sent a Jacksonville Suns baseball schedule featuring Clayton Kershaw in a Jacksonville uniform. In the tradition of the Old Baseball Cards site, he sent the items with no thought of getting anything in return.

I did send him some stuff back, although I can't remember what it was now.

Through it all, I continued to read his card blogs. I noticed that his entries published on Friday on both his blogs, even though he apparently died on Wednesday. I even commented on his entry of this card: 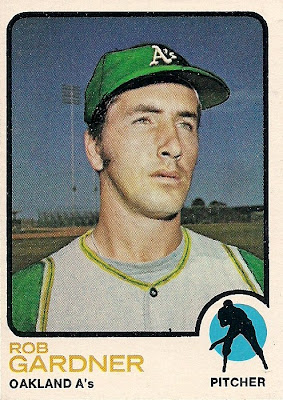 Rob Gardner was from Binghamton, N.Y., which is where I grew up. But, true to form, Chris was able to find some information about Gardner that I never knew and put it in his blog. I commented on the post, not knowing what had happened to Chris.

I will attest that all of that is true.

His contribution to the hobby should always be remembered and honored.

Farewell, Chris. I will miss you. 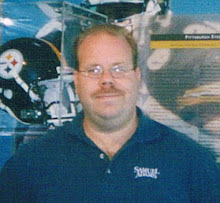 Nick said…
Very sad. I read both of his blogs on a consistent basis, loved his take on everything he wrote.

Brandon said…
Thanks for writing this wonderful post on Chris. I always appreciated his ability to write witty posts without coming off as sarcastic or mean spirited. His contributions to the card blog world will definitely be missed.
His blog was one of the first I "discovered" and it's a shame that he's gone way too soon. RIP
September 22, 2012 at 2:00 PM

Cory said…
That is terrible.

I'm his age and it absolutely punched me in the gut to read this.

Really sorry for his passing and his family's mourning.

BASEBALL DAD said…
I had heard of him although I am not real familiar with his blogs as I am not a vintage phanatic. That is a great story you have written and a very nice tribute to him.

I had a heart attack at 47.It was a wake-up call and I have since taken great measures to improve my condition. Hopefully this sends a message to all who may be candidates for health problems.

Commishbob said…
Been out of the loop for a bit and come back to this sad news. Chris was a great guy. He was very helpful to me on several fronts. This community will miss him.
September 22, 2012 at 5:43 PM

39 is indeed way too young.

irondequoit36 said…
Sorry for the loss of your friend and to the others that knew him. Your post was a great tribute.
September 23, 2012 at 9:05 AM

Drew said…
Wow, nice job Greg. I never got the opportunity of knowing Chris, but this was a great tribute to him. Anytime we lose one of our own it's tough. Rest in Peace.
September 23, 2012 at 10:31 AM

EggRocket said…
Very touching tribute. Thanks N.O. This is a reminder of our own mortality and gives us an opportunity to readdress our own lives.
September 23, 2012 at 10:43 PM

Matthew Glidden said…
Thanks for sharing the stories of your common history with Chris. The loss will be felt acutely for all his readers and friends.
September 24, 2012 at 12:14 AM

Play at the Plate said…
That's a damn shame. I was fortunate enough to trade a couple of times with Chris and he was always more generous than I could be...he was a good guy and his knowledge will be missed. Thanks for the nice write up Greg. He would have enjoyed it.
September 24, 2012 at 12:50 AM