September 21, 2012
OK, that's probably a lie already. I am certain that a relic card or two is going to find its way onto this blog even after I've sworn them off.

But at the moment I have no desire to buy any relic card for the first time since I returned to collecting modern cards in 2006. The fake jersey news stinks so high that giraffes on Mars can smell it. So I am treating the following cards as the last relics I will conceivably purchase. Future me will just have to prove me wrong.

These cards were obtained immediately before the fakes hit the fan. I feel bad for them because I look at them differently now. No longer do the cards see a gooey-eyed collector, with hearts swirling around his head, looking back at them. Instead they see a critical, cynical, pissed-off malcontent who is practically boring a hole through the card because he's trying to figure out what that jersey REALLY is, mister.

But let's try to have fun with these cards anyway.

First up, an Allen & Ginter special: 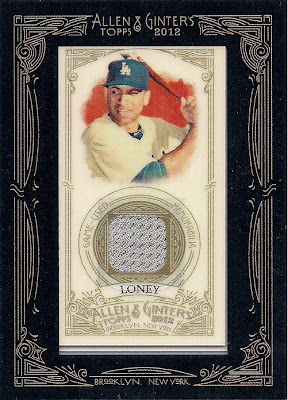 This card was acquired from the recently defunct blog, Juuust a Bit Outside (I won't link it, because it's depressing). It's kind of fitting. The blog died, and then my faith in jersey cards died.

So what is really in that tiny swatch window? A few guesses:

Here's what Topps says on the back: "This Topps Allen & Ginter relic card contains game-used memorabilia of James Loney, star first baseman of the Los Angeles Dodgers. The relic contained in this card is not from any specific game, event or season."

I'm sorry, I didn't hear anything after the words "star first baseman."

But, given all that, here is my guessed percentage on the chance that this is actually a scrap of jersey worn by James Loney:

Which also happens to be the same percentage when gauging whether the Red Sox will release Loney this offseason.


OK, next up, an Upper Deck beauty: 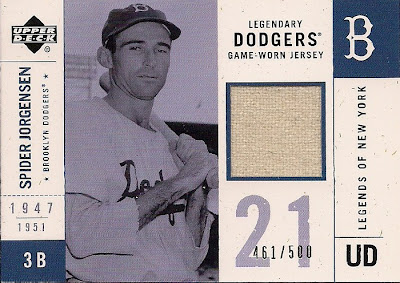 I really, really, really, desperately want this jersey swatch to be the real thing. It's one of the first purchases in my return to ebay; it was pointed out to me by Scott Crawford; it's exceptionally well-designed and you can't say that about 80 percent of jersey cards; and it's SPIDER JORGENSEN, people!

Spider Jorgensen, for those who are not Brooklyn Dodgers fans, was the starting third baseman for the 1947 pennant-winning Dodgers. It was basically his only season as a starter and he was out of the majors by 1952, although he played in pro ball until the '60s.

He is one of the great names in baseball lore, which is why I hate doing this, but ...

What could really be in that swatch window?

Here's what Upper Deck says on the back: "On the front of this card is an authentic piece of uniform worn by Spider Jorgensen in an official Major League Baseball game."

Chances that this is an actual scrap of jersey from a Spider Jorgensen uniform:

I want the swatch to be real, but I don't believe it. You've got to be kidding. Who has Spider Jorgensen jerseys sitting around 50 years after his four-year career ended AND permits one to be cut up? I didn't believe that even before Jerseygate.


Finally, another UD card featuring The Penguin as Bat-man: 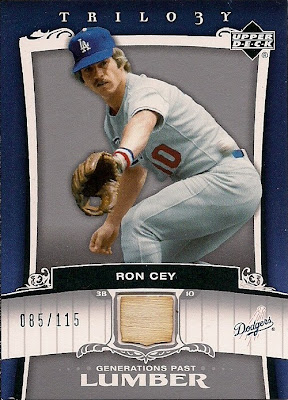 This is a COMC purchase. I like it because it's my favorite player ever, it's numbered, and the bat piece is so tiny that it could go on a 24-city comedy tour and get laughs. (Not to mention it's a bat relic and features Ron Cey fielding).

For now, though, what could this itty, bitty, cutey, wooty piece of lumber, be?

You KNOW that's possible. You know it.

What it says on the back: "On the front of this card is an authentic piece of a bat used by Ron Cey in an official Major League Baseball game."

Chances that this is an actual bat remnant from a Ron Cey bat:

You don't mess with The Penguin. Or his relic cards.

And if you did, don't tell me.

Spiegel83 said…
I think the Spider is real. It just seems like an odd card to fake. Adding a Spider Jorgensen to the set won't attract thousands of collectors. I am thinking that most of the fakes are the high end guys like "star" first baseman James Loney. Hahahaha!

Robert said…
I've always loved the challenge of finding out if the carpet matches the drapes...

On the other hand, I feel your pain about the relics...just proves to all of us that sometimes things are too good to be true. Wonder if the card companies are going to do anything to regain the trust of the collecting world as far as relics go.
September 21, 2012 at 10:22 AM

Adam Kaningher said…
I don't know about the jerseys, but it wouldn't be that hard, in a lab, to tell if those bat relics are even hickory in the first place.
September 21, 2012 at 10:38 AM

Pro Set Cards said…
The Spider could be worth a mint if it is a piece of Teddy Ruxpin!

I always found that Teddy a little annoying and wouldn't mind him being chopped up!
September 21, 2012 at 10:59 AM

Dhoff said…
I still believe! I'm like a kid holding onto the Tooth Fairy. Oh well. I do think the Spider is real. I don't think those fraud sellers are smart enough to try and fake something from a lesser-known star of lore.
September 21, 2012 at 11:28 AM

ernest said…
I hear ya... jersey cards are going to take a big hit in values- especially the vintage and high-end players. Heck, considering Upper Deck's reputation and recent reports, I have to suspect that all UD jersey cards are fake. I just don't trust that company anymore.
September 21, 2012 at 12:59 PM

dayf said…
Huh. I didn't know that about JABO. Funny how that seems to be happening a lot lately.

My policy on Relics until the Industry cleans up their mess:

The ball is in the manufacturer's court. They can take the little bit of extra time and effort* to verify everything and use it as an opportunity to increase the value of their product and create customer satisfaction, or they can keep dodging the issue and create a PR disaster wherein the entire hobby is tainted and customers run away in droves.

*and money. Which is why they'll choose option #2. THE HOBBY IS DEEEEEEAAAAAAAAADDDDDDD
September 21, 2012 at 5:57 PM

Fuji said…
I truly feel like the husband whose wife is cheating on him, but he's in denial.

I keep telling myself that all of those jersey swatches are real... in an effort to brainwash myself.
September 21, 2012 at 7:01 PM

SpastikMooss said…
This bugs me, a lot, but I've been a conspiracy theorist for a while anyway so most of the newer stuff was weeded out of my collection for "sure things" with "legitimate, 100% certain wording" (because who's to say 100% wording means any more than the cards that are intentionally vague). I'll just happily collect my PC guy's 2003 rookie premiere relics and pretend other cards don't exist :-)
September 21, 2012 at 7:57 PM

Anonymous said…
I have to agree with you on this subject. I'm also leaving relic cards behind and act like they never existed. To much drama and controversy for me. I like to keep this hobby fun
September 24, 2012 at 7:44 PM