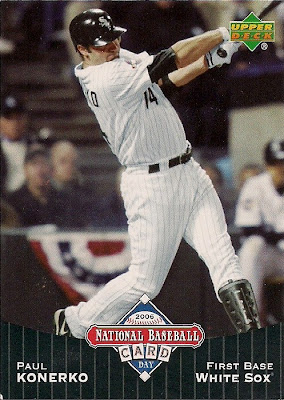 The news today is that the Dodgers have signed general manager Ned Colletti to a contract extension.

I'm not a fan of Colletti, but I'm not shattered by the news. Baseball is a pretty staid operation. Organizations stay with what works, even if the results aren't the best, even if they're basing the signing on seasons from three, four years ago. That's why George Steinbrenner stood out, because if something didn't work instantly, he fired it. That really doesn't happen very often, and why Colletti's return is no surprise.

His legacy, and future with the Dodgers, will hinge on the outcome of the Adrian Gonzalez trade with the Red Sox. Did the Dodgers give up too much, or, more importantly, will the new acquisitions lead to Dodger greatness?

GMs are fans' whipping boys. There isn't much they can do that won't get criticized. And, like all fans, I remember the players that got away more than anything when recalling past GMs.

The most painful "player that got away" for the Dodgers is Pedro Martinez, a trade that happened under Fred Claire's watch. From a personal standpoint, the most painful trade was when my favorite player, Ron Cey, was dealt to the Cubs for a minor leaguer by GM Al Campanis.

Today, the trade that still irks me, because I see him in the boxscores everyday, is the Dodgers dealing Paul Konerko to the Reds for reliever Jeff Shaw. Konerko, of course, is in season No. 14 for the White Sox and has compiled more than 400 career home runs.

I have plenty of cards of Konerko as a Dodger -- many more than I do of him as a Chicago White Sox. But Konerko hit a grand total of four home runs for the Dodgers, back in 1998 -- before he was traded on July 4th to Cincinnati by Dodgers interim GM Tommy Lasorda.

(By the way, the Reds' trade of Konerko to the White Sox for Mike Cameron wasn't so hot either. But at least the next year Cameron helped the Reds land Ken Griffey Jr.).

I can't be the only one continuing to agonize over a trade my team made more than a decade ago. Anyone else still bothered by their team's past deals?

Night Card Binder candidate: Paul Konerko, 2006 Upper Deck National Baseball Card Day, #10
Does it make the binder?: Yup. So I can relive the pain all over again.

jacobmrley said…
As a Mets fan, we have nothing but trades to be bothered by. Just recently:

Scott Kazmir for Victor Zambrano. OK, so Kazmir's arm eventually got hurt like Pederson thought it would, but Zambrano sucked AND his hurt his arm. We could have had 5 nice seasons out of Kazmir rather than 35 mediocre starts of VZ.

Melvin Mora for Mike Bordick. We traded 10 years of the scrappy Mora for 56 games of Bordick.

Not to mention classics like Amos Otis for Joe Foy, Nolan Ryan for Jim Fergosi, and Tom Seaver for 4 guys who would be better off pumping gas.
September 15, 2012 at 7:22 PM

John Bateman said…
Konerko is a strange dude. I was never sure how to classify him. Most of the time forgot about him.

He was on one World Series winner. He seem to get better in his mid 30s. Very consistent. A very different career. Never elite but never average either.
September 15, 2012 at 8:54 PM

Jordan said…
Jesus Montero, Austin Jackson and Ian Kennedy are the most recent Yankee examples, and the last two smart the most. You could say that the Angels stole Winfield at the end, and that the comissioner stole Vida Blue from us, though we never really had him in the first place.

As for the Phillies, I'll say the obvious: Ivan DeJesus wasn't worth giving up one of the greatest second basemen of all time to a losing team. But giving up Michael Bourn in the Lidge deal also hurt a bit.
September 15, 2012 at 10:16 PM

night owl said…
I should have mentioned the Piazza deal, too. Dodgers didn't exactly get stiffs in exchange, but, damn, trading Piazza is just INSANITY.
September 15, 2012 at 10:36 PM

Marcus said…
I'll disagree with John and say that Konerko HAS been elite. Dude is a machine, and doesn't get a lot of recognition for it. He is currently my favorite non-Padre, so maybe I'm a little biased.

The trade that still hurts me is from 1993, when the Padres were in fire-sale mode and sent Fred McGriff to the Braves for three nobodies. The only friends that I had that were into baseball cards were both huge Braves fans, and they always killed the Padres, so I lived a nightmare for a while.

Actually, the Gary Sheffield trade to Florida stung pretty good as well, but he wasn't as likeable as the Crime Dog, and we got this guy named Trevor Hoffman in that deal, so that worked out okay. But Sheff came close to winning the Triple Crown the year before, and is still the only Padre not named "Gwynn" to win a batting title.
September 16, 2012 at 12:18 AM