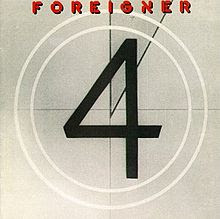 I have been on a Duke Snider kick for basically the last three months -- and you're going to see another key Duke card in another week or so -- so I might as well squeeze in this Dodger uniform number retrospective, too. Besides, today is the Duke's birthday.

Willie and Mickey? Seriously, I don't know what you're talking about.

As far as Dodger fans go, Snider is the only center fielder worth discussing and the only No. 4 on record. But even though the number is retired by the Dodgers in honor of Snider, others in Dodger Blue have worn No. 4, including a couple of notable ones.

We'll start with a legendary Cub: 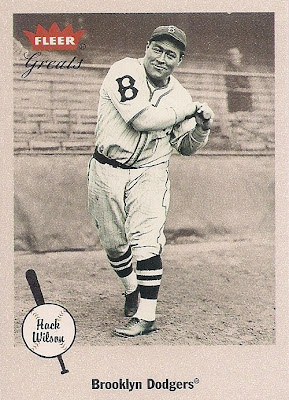 Two years after Hack Wilson sent 191 runners home, he was a Brooklyn Dodger and the first reported Dodger to wear the No. 4. He arrived with the Dodgers in 1932, which was really his only season with Brooklyn worth mentioning -- he drove in 123 runs on just 143 hits.

But Wilson would stay around two more years with the Dodgers wearing No. 4.

After Wilson's exit in 1935, the No. 4 was handed to third baseman Frenchy Bordagaray, one of the greatest card wants in my collection. I NEED a card of Bordagaray. 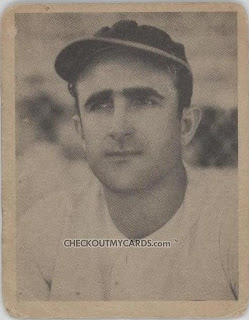 However, Bordagaray played with the Dodgers in 1935 and 1936, wore No. 4, and made his biggest scene in those years. Bordagaray was the outgoing type and even acted in some movies. He arrived in spring training with a mustache in 1936, which was outrageous at the time. I'd love to own a card of Bordagaray wearing a mustache, if such a thing exists.

Bordagaray returned to the Dodgers from 1942-45 and wore four different uniform numbers, but never the No. 4 he wore the first time around.

After Bordagaray's exit, the number was given to infielder Tony Malinosky who lasted just 35 games in 1937. No. 4 was much better served the following year by this man: 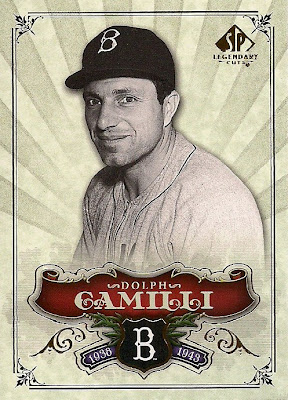 Dolph Camilli came to the Dodgers in a trade with the Phillies, one of the worst that the Phillies ever made. Camilli would enjoy five fine seasons with Brooklyn, win Most Valuable Player honors in 1941 and drive in 100 runs in his first year wearing No. 4 in 1938.

Camilli endured a painful childhood (abusive alcoholic father/separated from his mother and sisters) but became known as a "gentle giant" at first base for the Dodgers. Best of all -- for me -- when he was traded to the Giants in 1943, he refused to report to them because he hated them. The animosity between the Dodgers and Giants was so high that Camilli couldn't see himself playing for the Giants. So New York sold his rights to a Pacific Coast League team.

I often think that Camilli doesn't get the attention he deserves. But that's the case with a lot of 1940s ballplayers. While we're babbling about Oscar Gamble and Mark Fidrych nonstop, '40s players get forgotten.

Camilli's departure with the Dodgers, led to an aimless few years for the No. 4. Somebody named Gil English -- a backup infielder -- wore it in 1944. Babe Herman, better known for his time with the late 1920s Dodgers, wore it in a brief return to Brooklyn in 1945. And fringe catcher Mike Sandlock wore it in 1946.

Then, in 1947, the Dodgers handed No. 4 to an athletic young man just up from the St. Paul Saints. 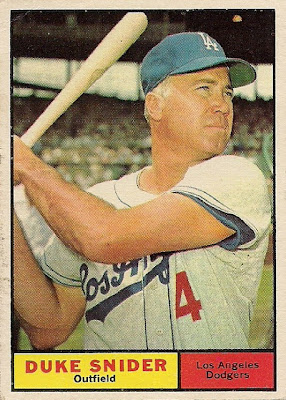 Snider would attain such legendary status that he owned two nicknames ("Duke of Flatbush" and "The Silver Fox") and had songs written about him. He helped the Dodgers to two World Series titles and marked the transition of the No. 4 from Brooklyn to Los Angeles.

Snider was elected to the Baseball Hall of Fame in 1980 (on his 11th try) and his number was retired by the Dodgers on July 6 of that year (the Dodgers customarily don't retire numbers unless the subject is in the Hall).

But between the time Snider left the Dodgers after 1962 and the time he entered the Hall of Fame in 1980, three other players wore the No. 4. 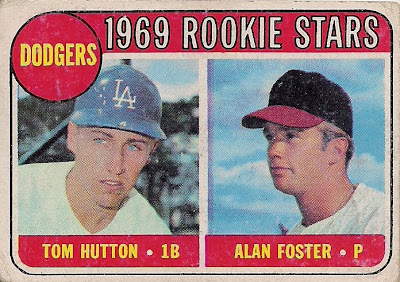 Tommy Hutton returned the number to the infield in 1966 when he was called up by the Dodgers. Hutton would return to the minors after '66, but when he came back in 1969, the No. 4 was waiting for him again.

Then he was traded to Philadelphia, and the No. 4 wouldn't appear on a Dodger uniform until 1974. 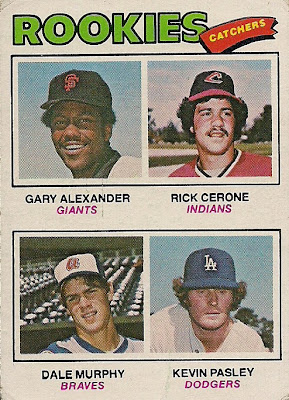 In fact, we don't need those other jokers. This is a Dodger uniform retrospective. 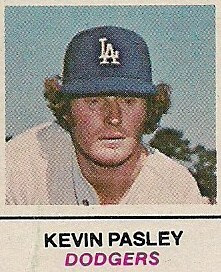 The last player to wear the No. 4 before it was retired was an outfielder. A center fielder, in fact. Just like The Duke. 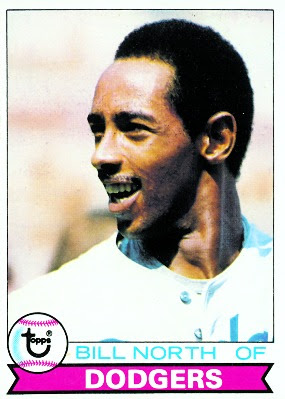 Bill North was known more as speed guy, and his credentials were leading the league in stolen bases. North played for the Dodgers in 1978 and that was the last time the No. 4 played a role on the field for L.A.

(By the way, almost all of North's cards are static head shots, which annoys me to no end. The guy was one of the greatest base stealers of the '70s and you can't get one photo of him at least standing on first base?)

Snider would later gain meaning to me as a Montreal Expos broadcaster who I would listen to when visiting my grandmother in Buffalo. He'd be the subject of card collecting heartbreak when I was in high school. His jersey is the only one I own (I'm wearing it right now). And he signed a couple of cards for me through the mail before his eventual passing in 2011.

I never knew until writing this blog, just how much of an impact Snider would have on it.

Even after all of that, you're the only No. 4 that I know.


(P.S.: Why is the Foreigner album up there? I sheepishly admit that when it comes to numbers, I think of music before I think of baseball. Which is probably why I'm not writing for High Heat Stats ... well, that and I have 3 blogs and a full-time job).

JediJeff said…
Holy crap man - you can't even link to a video of Juke Box Hero or Urgent? Do I have to do everything for you???