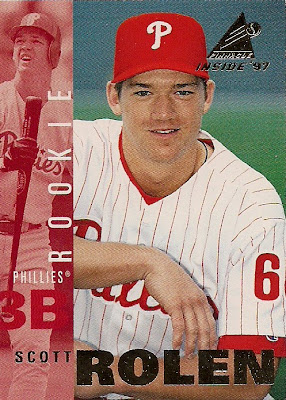 I bought my first card on ebay in three years a couple of days ago. I've pretty much ignored ebay during the life of this blog. Money and anonymity are a terrible combination, and I was sick of the hassle. Also, my will power wasn't as strong then as it is now.

You'll see that rare ebay purchase at some point soon. But tonight I'm covering what has become an acceptable alternative for me, Listia.

After a rocky start, I've added some semi-decent cards for my collection. Listia doesn't have a lot of high-end, "hit" cards that you'd find on ebay -- in fact it has more than its share of junk -- but there is enough out there that interests me.

But, you get to get rid of cards you don't want, which is an insanely great part of this site. In fact, I should be scanning some cards so I can make them disappear out of my home right now.

But instead, I'm going to show you some cards I've gained recently from the site. 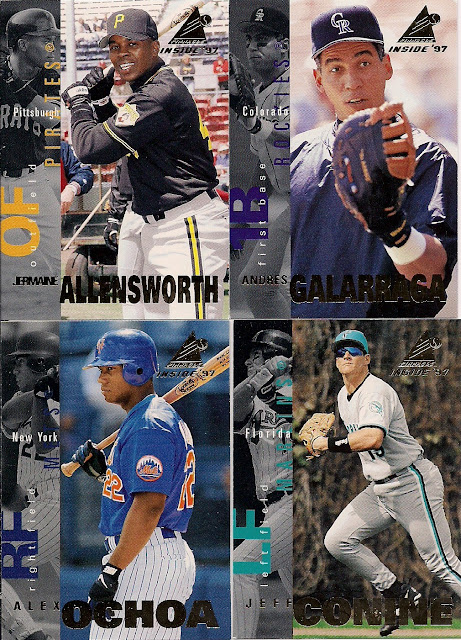 These four 1997 Pinnacle Inside cards -- the famed "cards in a can" -- came in the same lot with the rookie Scott Rolen card.

But I don't care about any of those. I bid on the lot for this card: 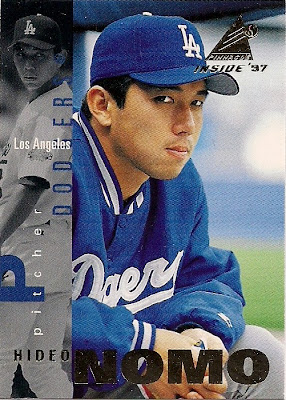 Any day I land a Hideo Nomo card that I don't have is like finding money in the street.

Now, the danger of being able to view a bunch of cards at once, whether it's on an auction site or at a card show or at a card store, is that you might end up acquiring a card you have already. Listia is not immune to that phenomenon. 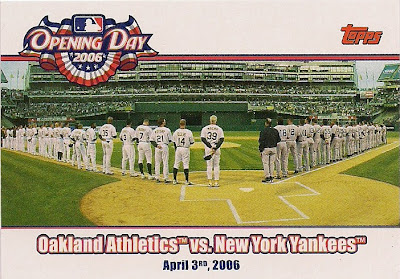 I saw this card and my "Must Acquire ALL 2006 Topps Cards" senses switched into high alert. Before I realized that I already own all of the Opening Day insert cards from this set, the card was mine.

I suppose I could've let the seller know "never mind, I have this card already." But I'm not dealing with cash here. It's just credits. No biggie. 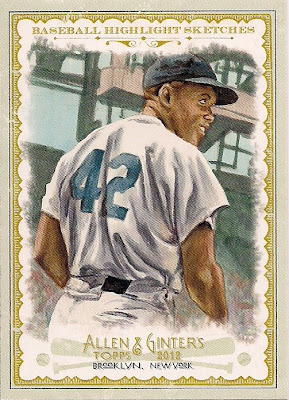 The credits accumulate quickly for recent cards like this one. I usually ignore most 2012 cards on Listia because I know I'll be out-bid eventually. But I landed this card, which is the only sketch card from Allen & Ginter that I want. 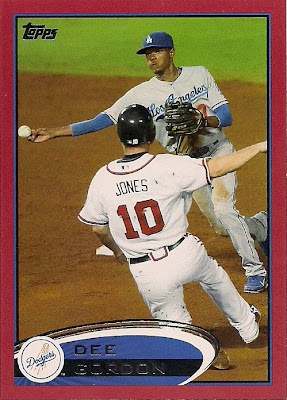 And, I couldn't ignore this card either. I get a kick out of Chipper being retired every time I see this card, and I'm pleased to say that I now have both the Target and Walmart versions of it. 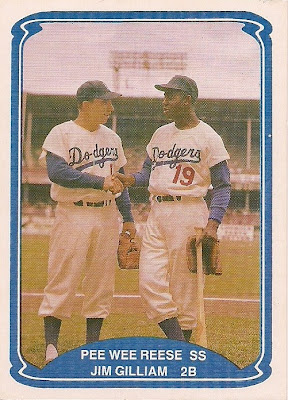 Like 2012 cards, any card featuring famous old-timey players is likely to pile up the points, even this innocent TCMA card from the late 1980s. I have several of the Dodger cards from this set, and didn't think anything much about them.

Then I bid on this card and was stunned by how it blew up. Fortunately I had enough to pull the trigger and land it. It really is a great card. 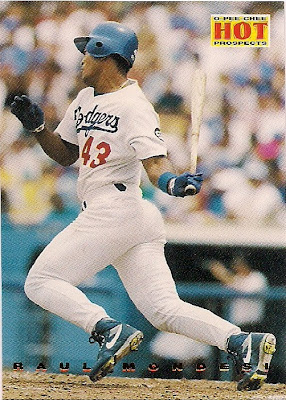 Where I've been able to find my groove is with cards that fall between the cracks. Cards that are either not vintage/do not feature old-time players or cards that are not the latest and greatest.

Raul Mondesi's cards get ignored. But how can you ignore an O-Pee-Chee insert with red foil from 1994? I can't. 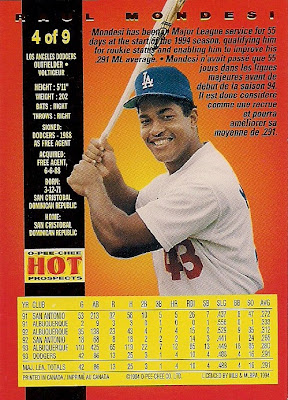 There's even red foil on the back of the card. That had to be something special back then. 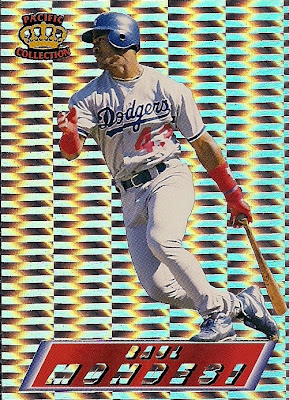 It's just crazy how few points I gave up to grab this card. Just, wow.

Most of the people who post cards ship them out quickly and they're in great shape. I haven't had an issue with one of them. You come across some "different" people on Listia, I think just because it's a "free" site where money isn't the name of the game. But everyone has been totally cool.

So, I just amble along, picking up a card here, getting rid of a few cards there. It suits my needs and I'm glad I found it, thanks to Thoughts and Sox.

I get free credits if I refer others to Listia, but I'm not going to do that here -- you can find the site yourself. If you want to put me down as a reference, fine. If you don't, that's fine, too.

I've got a little bit more of a handle on it than I did at first, and as long as the cards are still there, I'll stay with it. Unless it gets too crowded. I won't be able to deal with that.

Oh, here's another card I ended up with: 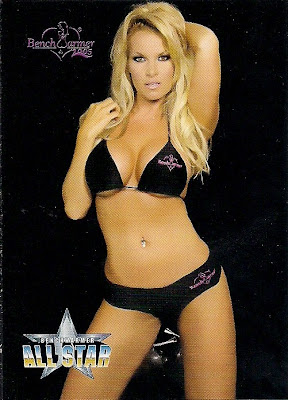 What can I say?

The Baseball Card Snob said…
Well, I'm glad you didn't outbid me on some of the cards I was interested in. Some of the asking "credits" are insane. To me a credit is worth a penny. One guy is trying to sell a box of 2012 OD for 8888 credits. But it is a fun site. I just sold two of kids old DVD's that they don't watch anymore for over 800 credits.

SpastikMooss said…
Value of the credits is so hard for me to figure. Based on how much you can buy credits for, it seemed like 300 credits = one dollar. But if you look at gift card auctions or buillion auctions, there actually seems to be many more credits in a dollar, probably closer to 600-700. It's kind of opened my Listia wallet to bigger purchases, though I'm still looking for just the right big ticket item. But I now start all my auctions at 1,000 credits, because that's sort of the minimum I'd like them to sell for. Surprisingly I've made 7-8 sales (including 3 tonight) since going to the 1,000 credit minimum start.
September 10, 2012 at 8:30 PM

flywheels said…
I signed up thanks to Nachoes Grande talking about Listia, but outside picking up a Julio Franco I didn't have I really haven't done much on the site. I should try to make some of my cards "disappear" as well.
September 10, 2012 at 9:22 PM

madding said…
I'm enjoying the Listia thing while it lasts, but I have a feeling it will start to make less sense for card collectors soon. For now, it's pretty fun. I definitely need to motivate myself to "sell" more, though.
September 11, 2012 at 2:21 AM

Josh D. said…
A coupon for a free bottle of $4 shampoo just went for 1600 credits. You can buy credits such that they are 300/$1. I think currently cards are under-valued and other things are over-valued there.

Cory said…
Spastik is right. The only place on the site where money and credits are mentioned in the same sentence is on the 'buy credits' page.

I just spent a ton of time and energy to build up enough credits to get my mom the ipod touch on the rewards store. I added up my postage along the way and it came to around 85-90 dollars. Plus a ton of cards I could never sell for any thing on ebay. It was a excellent way to get that ipod. Won't lie though, you spend a bunch of time and energy to do it.
I haven't posted on my blog because of Listia but now that I got what I was trying to get there I haven't listed anything in a week.

My stomach thanks me.

Just a word to anybody that wants to start listing cards:

1: put every card in a sleeve and top loader.

3: About an inch down from the top of the top loader attach an index card with tape. This is very important as it acts as a stabilizer in the envelope. Plus you can put a thank you note on it.

4: Put it in a plain white envelope. PWE.

5: 1 forever stamp per envelope is generally good enough for postage but your P.O. will vary. I go to the town over from me because they dont' gripe about a lack of a 20 cent stamp(which is needed sometimes to let them know you don't want it machined). Test a few auctions with just one stamp and if it arrives safely then you should be set. I have done over 250 listings and have had 3 that came back needing the 20 center.

Cory said…
I started all my listings at 150 credits as I found it promoted heavy bidding when you start low.

And don't forget about Coke Rewards on your bottle caps. I have given up soda as I'm pretty sure I am sitting at the doorway of diabetes like my mom just got. One code usually gets you 25 credits or more. It's not much but there is no shipping and you just message the code to the winner.

I just realized I should have just done a post about it but it will be seen here more often so it'll help more peeps hopefully.
September 15, 2012 at 12:41 AM